What makes scientists already so certain that Comet C/2019 Q4 (Borisov) is a comet and not an asteroid?

Unlike 'Oumuamua, whose asteroid-or-comet nature still gets debated, this one is definitely a comet. If it is unequivocally interstellar, it'll be fascinating to see how its composition (spectral properties) compare to the variety we see in comets from our own solar system.

Question: What might cause astronomers like Dr. Battams be so confident that this object is a comet and not an asteroid, besides the fact that it's being called one? (Comet C/2019 Q4 (Borisov))

Is it just the orbit itself, or are there other observational data such as brightness in the infrared?

It's the appearance that is mainly used to distinguish comets from asteroids. As noted in the discovery Minor Planet Electronic Circular (MPEC), numerous observers observed extended diffuse emission (i.e it looks "fuzzy" with a Full Width Half Maximum (FWHM) greater than the field stars, or shows a tail) typical of a comet. In the case of 1I/'Oumuamua, deep searches with 8-m telescopes failed to record any evidence for any extended emission, indicating it was most likely a bare rock. The much brighter magnitude of C/2019 Q4 does play a role in this, making a search for extended emission easier.

The distinction has become more difficult in recent years with the discovery of activated asteroids such as (6478) Gault, Main Belt Comets but also objects like 1I/'Oumuamua on very long period, comet-like orbits which don't seem to show any sign of emission. 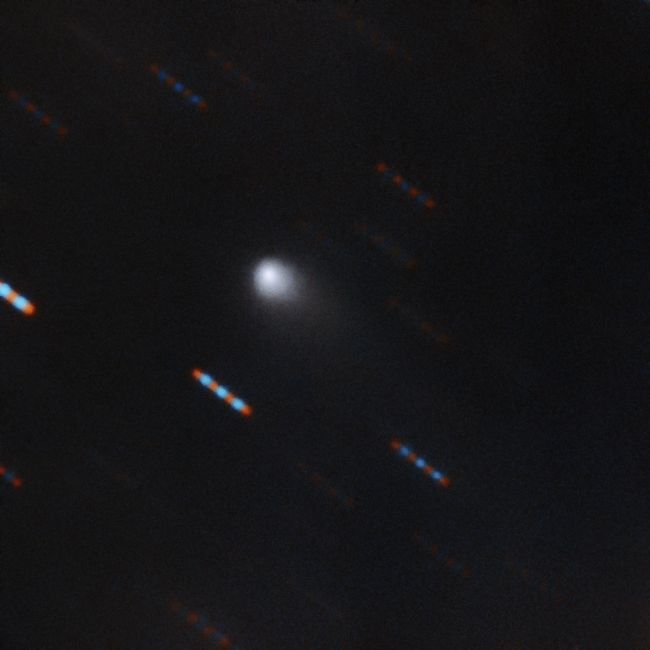 The first color image of the comet C/2019 Q4 (Borisov), which astronomers believe to be the first known interstellar comet ever identified, was captured by the Gemini North telescope at Hawaii's Mauna Kea. Gemini North acquired four 60-second exposures in two color bands (red and green). The blue and red lines are background stars moving in the background. (Image credit: Gemini Observatory/NSF/AURA/Travis Rector)

To complement @astrosnapper's answer here are two views of an early image of the comet.

above: From space.com's 1st Color Photo of Interstellar Comet Reveals Its Fuzzy Tail

below: From the hastily assembled ArXiv preprint Interstellar comet 2I/Borisov. I'm not sure, but this might be the same data just 'zoomed in'. 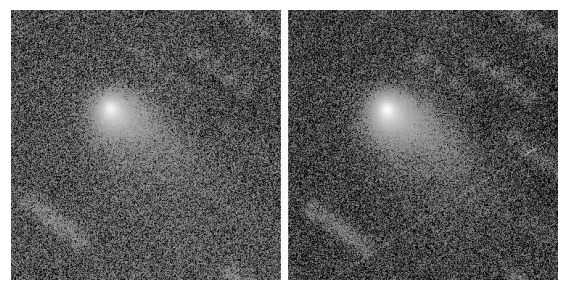 9
Do astronomers generally agree that the distinction between comets and asteroids is not so clear?

2
What was that Asteroid/Comet in the 90s?
10
Is this object an asteroid or comet, and how can it produce so many tails?
9
Do astronomers generally agree that the distinction between comets and asteroids is not so clear?
4
What are the maximum and minimum impact speeds for an asteroid that would strike the Earth?
5
How can we be certain that Ryugu is a remnant of the material that did not form planets?
5
What is the closest an asteroid or comet has passed the Sun and survived?
2
Estimate prevalence of ʻOumuamua-style interstellar obects inside Jupiter orbit now that C/2019 Q4 (Borisov) is found?
1
What makes the coming comet increase/decrease in brightness?
8
Size and mass of comet ATLAS (C/2019 Y4)
7
What is the difference between a depleted comet and an asteroid?