What kind of telescope should I get my husband?

I'm very much an amateur when it comes to telescopes. My husband wants one for his birthday. I'm willing to spend up to $900 on one. Can any of you gurus give me advise as to which one I should buy?

Thank you so much in advance!

Video Astronomy or as some refer to it as Live or Near Live Viewing is a growing field of interest that lies between traditional viewing with an eyepiece and Astro Photography.

Eyepieces are substituted with cameras and the viewing is done on a screen. In general the cameras are more sensitive than the eye and often reveal more detail and color.

That being said it is a field that some love and others hate. The individual needs to decide for themselves. There are extremists in both groups. An open mind helps but have a few grains of salt on hand just in case. :)

In general, the electronic viewers prefer telescopes with a faster f ratio than the eyepiece viewers. Because of the increased camera sensitivity, many claim smaller aperture telescopes can work as well as those with double their aperture. Better to find out what type of viewing is more interesting before buying any equipment.

My suggestion is to see what the electronic viewers are doing with their equipment.

Many electronic viewers broadcast their viewing sessions on the NightSkiesNetwork. Anyone can join in on these broadcasts at

Most broadcasts originate in North America but they could be from anywhere in the world. Check for clear weather in the Eastern time zone at nightfall in the East. If the weather looks clear take a look at the NightSkiesNetwork site then look again occasionally as nightfall passes across the continent. It is all weather dependent. In general you will find a broadcast sooner rather than later.

Most viewers of the NightSkiesNetwork started out with traditional eyepiece viewing and like astronomers everywhere are more than willing to give people advice whether it be for viewing with an eyepiece or a camera.

I use several Mallincam cameras, but there are other cameras available.

For what it is worth I viewed with eyepieces for fifty years before going electronic. In the ten years since going electronic I have had no desire to use my traditional eyepieces. Even when my eyesight was at its best and with telescopes up to 14" aperture I have never seen as much as I do now with an electronic eyepiece on my 5" and SCT's 10". That may make me sound like an extremist, if so be prepared to deal with a few more like me. :)

I saw this link earlier and remembered you were looking for a telescope. This web site is titled 'Telescopes 101'. It has pictures of the insides of Refracting, Reflecting, and Catadioptric telescopes. It also lists other things you may need to know before buying a telescope. The web site, as you'll see when you visit the site, was on the Astronomy.com web site if link doesn't work for some reason.

Here is an image from the report. 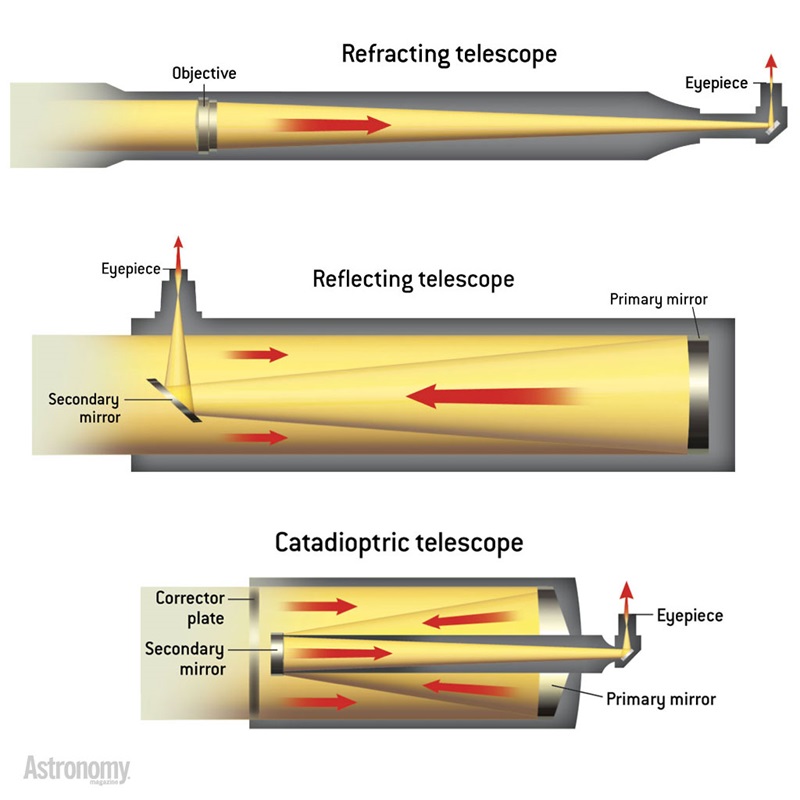 16
A good telescope for the viewing of Nebulae, Stars and Planets
4
Suggestions for a beginner-friendly telescope
8
Selecting a Telescope for Viewing Planets
5
How to choose portable, yet powerful telescope
2
How to pick a telescope?

8
Which type of telescope should I make?
1
Solar Telescope Projector Screen? [& intro telescope for solar eclipse]
6
What should I expect to see with my telescope with what EP's?
1
Which eyepiece should I use to view planets with a Slokey Skyways 50080 telescope?
4
How common are telescopes with the finder scope on the right side?
4
Is there a complete guide on how to use telescopes?