Would an object shot from earth fall into the sun?

Would an object shot from earth fall into the sun?

If an object is shot at 107,000 km/h via rocket or otherwise, in the opposite direction to our orbit about the sun, it will be traveling at 0 km/h relative to the sun. The moon is not close enough to the object to have a significant force for the purposes of this question.

Will this object start accelerating towards the sun or will it somehow fall into another stable orbit?

Could it instead get trapped in the L4 Earth-Sun Lagrange point? 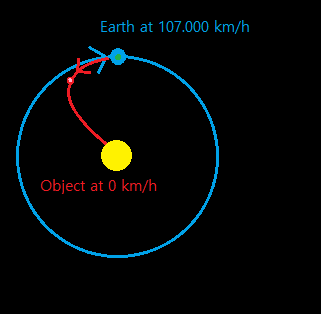 Assume that a spacecraft is instantaneously accelerated at the Earth's surface (disregarding the atmosphere for simplicity). We'll consider this from the Sun's reference frame; in other words, the Sun is stationary and the Earth is moving around it.

The spacecraft is accelerated to a velocity which is precisely equal and opposite to the orbital velocity of the Earth around the Sun, making it completely stationary in the instant after the acceleration.

What happens next? Well, we can consider the forces acting on the spacecraft:

To demonstrate the situation, I have created a small simulation which can be viewed in a desktop browser. Click here to try the simulation. (You can click "View this program" to check the code, and refresh the page to restart the simulation.)

The simulation is physically accurate (ignoring the effects of other planets), but the spheres have been enlarged for easy interpretation. The Earth is represented as green, while the Sun is orange and the spacecraft is white. Note that, while the spheres representing the spacecraft and Sun intersect, the distance between the two physical objects is always larger than 3.35 solar radii.

This screenshot shows how the spacecraft has been pulled into an elliptical orbit by the Earth: 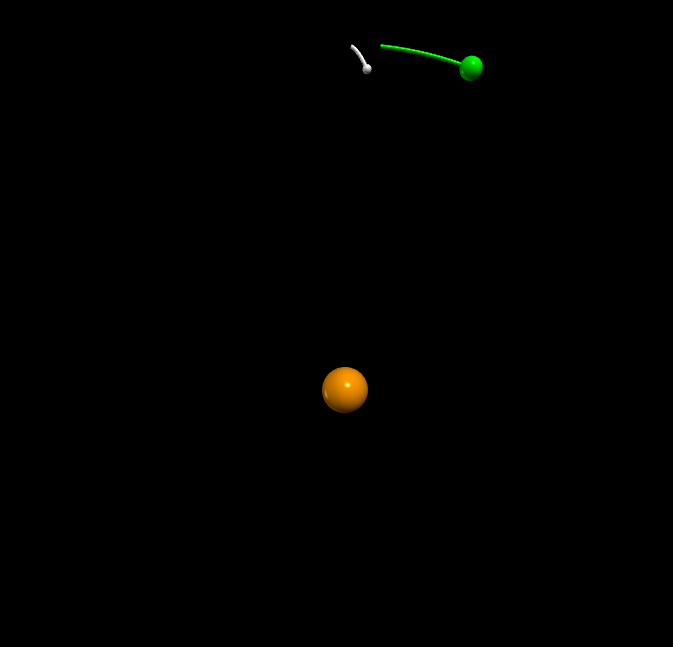 In this case, the result is essentially the same: there are still forces exerted by the Earth and the Sun, so an elliptical orbit will result. The further the rocket is from the Earth when it reaches zero velocity, the more elliptical the orbit. If the Earth is so far away that its gravity is negligible, the spacecraft will fall directly towards the Sun.

The launch you described is similar to that of the Parker Solar Probe launched August 2018 at 12km/s in a direction opposite Earth's orbital velocity, so it fell toward (rather than into) the Sun, in an elliptical orbit. Its speed at closest approach is expected to be greater than 200km/s

If an object is accelerated away from Earth fast enough that it winds up having no orbital velocity around the Sun, then it will fall radially into the Sun. It's orbital velocity that keeps the object (or the Earth itself) falling around the Sun and not into it. With zero orbital velocity, it simply falls straight down and it can't do anything else (getting trapped at the L4 point requires that it have an orbital motion very nearly the same as Earth's.)

The object will be attracted by the Sun's gravitational pull if the Moon and other planets in the Solar System are far enough that they do not significantly alter the object's speed or direction.

Not the answer you're looking for? Browse other questions tagged the-sun orbital-mechanics or ask your own question.

3
What will the last days of Earth be like?
2
Will a Ball placed close to Sun fall into it?
8
What is the origin of the dust near the sun?
6
How can Earth-Sun Lagrange points L1 & L2 even be semi stable considering the moon?
2
Calculate position of the Sun in ECEF
3
How feasible would it be to get to a planet orbiting directly opposite Earth?
2
Do Astronomers really never call Lagrangian points “libration points”?
1
Hypothetical planet jump: Will it perturb star systems?