How much infrared radiation is emitted by a bow shock?

Has the amount of energy being emitted from R Hydrae's bow shock been studied? 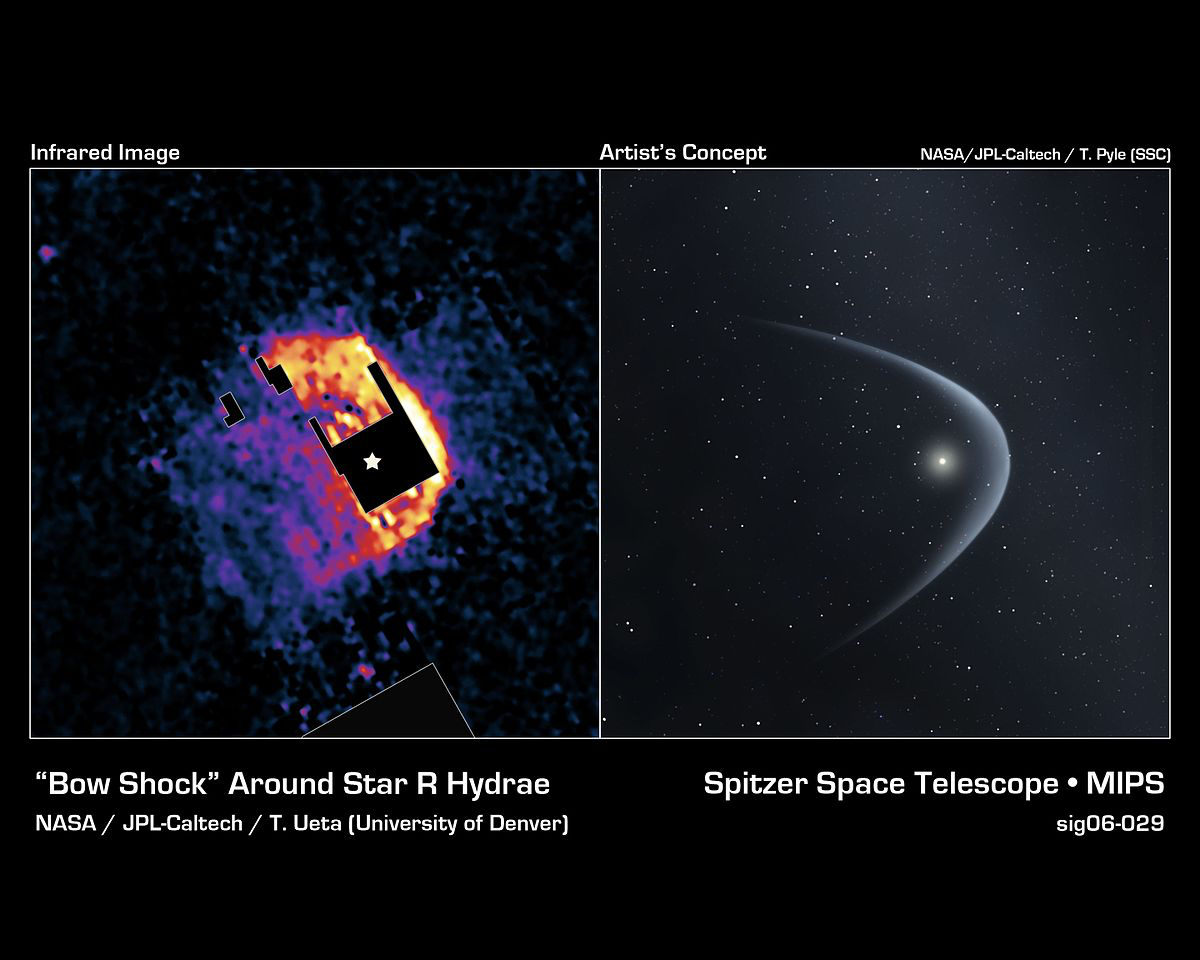 If so, is there any information how much infrared radiation is emitted in any means of measurement?

Thanks to AtmosphericPrisonEscape for pointing me in the right direction. I found this table from the DETECTION OF A FAR-INFRARED BOW SHOCK NEBULA AROUND R HYA: THE FIRST MIRIAD RESULTS. 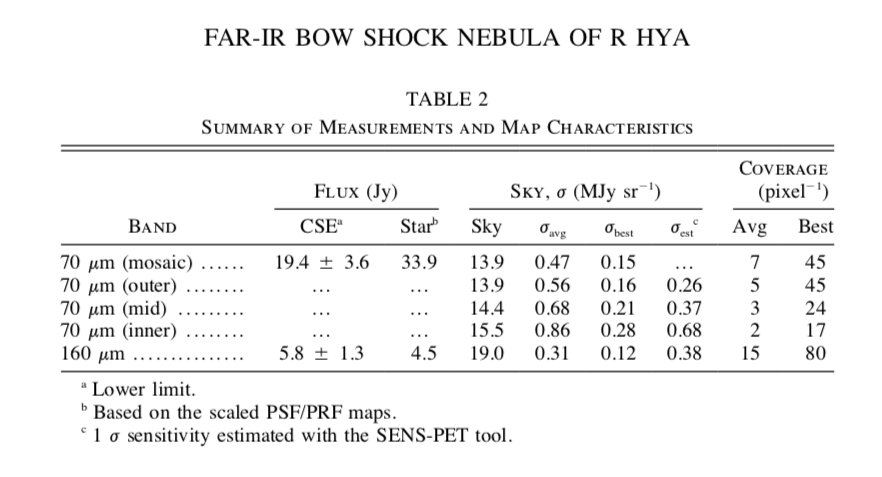 Has the amount of energy being emitted from R Hydrae's bow shock been studied?

Yes, here are a few papers:

The CSE is not a "bowshock". An envelope surrounds an object, while bowshock preceeds the direction of movement.

"Chemically rich circumstellar shells are found around asymptotic giant branch (AGB) stars and red supergiants (RSGs). ...
Given sufficient contraction, the helium core will eventually ignite as the H shell continues to burn. The fusion of helium produces $^{12}$C, and alpha capture on $^{12}$C yields $^{16}$O in the core. Eventually, the central helium is exhausted, leaving an oxygen/carbon core surrounded by He-burning and H-burning shells. The appearance of this two-shell structure marks the beginning of the AGB phase. The primary source of luminosity in an AGB star is the H-burning shell, but periodically the He shell ignites for short periods of time. The energy released in this so-called “thermal pulse” creates a convective zone extending from shell to shell, which mixes nuclear products from the He-burning zone to the stellar surface. This process, called the “third dredge-up,” brings carbon and other elements into the detaching envelope. The thermal pulses also aid in driving the outer material from the star, creating a circumstellar shell. In fact, AGB stars lose up to 80% of their original mass in the form of an envelope, with typical rates of 10$^{−6}$ to 10$^{−4}$ M$_\odot\cdot$ yr$^{−1}$.".

A useful but rough analogy is: a plane's paint fumes are the CSE and the bowshock is caused by a difference in the speed of travel that is supersonic. 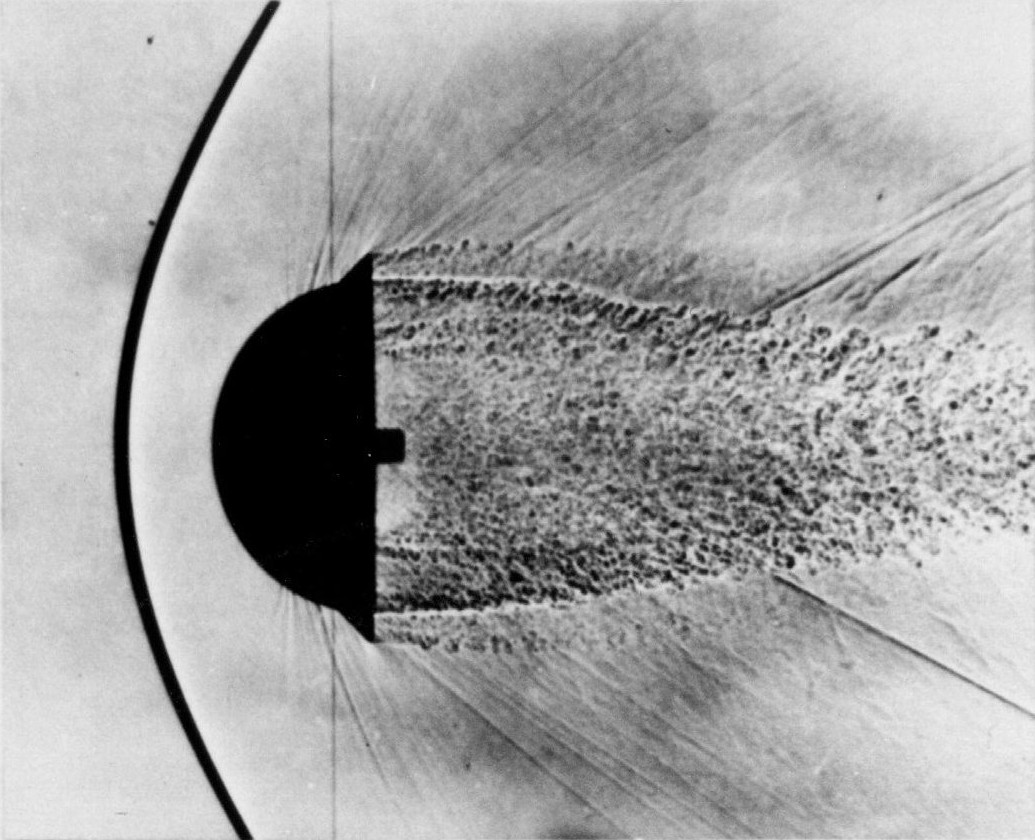 The image you included is used on Wikipedia's webpage "Bow shocks in astrophysics - Around other stars" and appears to have originally come from: Caltech's website, dated 2006-11-30. Another copy is on JPL's website: "Red Giant Plunging Through Space" (December 8, 2006), Spacecraft: Spitzer Space Telescope, Instrument: Multiband Imaging Photometer (MIPS). Simbad query for R Hya.

The paper that you linked to says on page 6:

"Stellar wind bow shocks are cometary structures due to the supersonic passage of wind-blowing stars. They sweep up interstellar matter into thin, dense shells, which may be revealed by their postshock emission or by scattered light, and provide a means of studying winds that might otherwise go undetected. ...
The theory of momentum-supported bow shocks was first developed by Baranov, Krasnobaev, & Kulikovskii (1971, hereafter BKK), who were motivated by the problem of the interaction of the solar wind with the local interstellar medium. ...
This method allows one to obtain simple, exact solutions for all quantities in the numerical model of BKK: the shell’s shape and the mass and velocity distributions within it. The shocked fluid in the shell has momentum that is precisely the vector sum of the momenta imparted to it by the wind and ambient medium, integrated over the surface of the shell, so there is no need to divide the problem into normal and tangential parts in curvilinear coordinates. Moreover, the tail of the bow obeys a simple, momentum-conserving snowplow model in two dimensions.".

In particular, on page 3, it says: 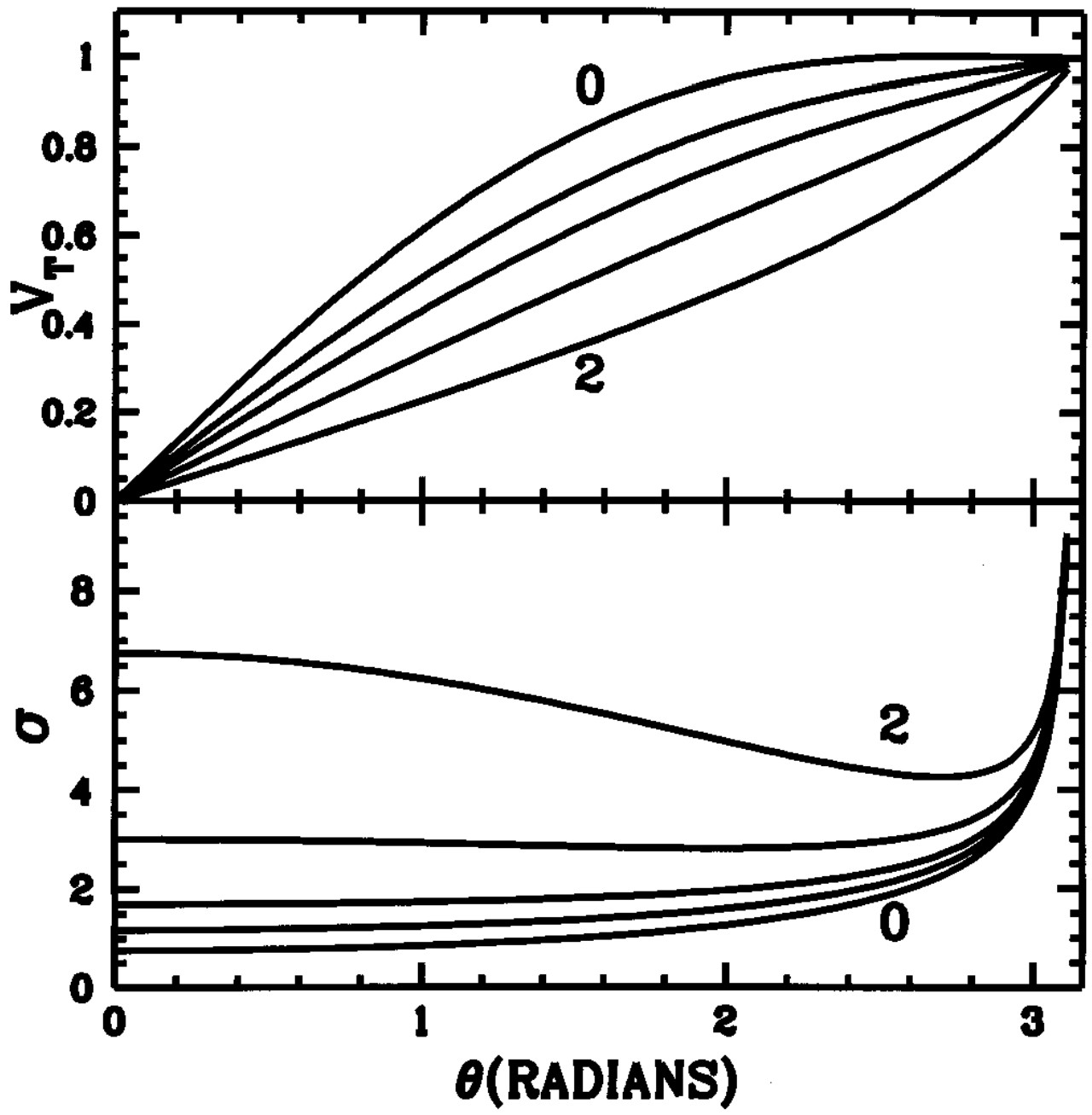 FIG. 4.—Internal shell velocity in units of V$_*$ (top) and mass surface density in units of $R_{0\rho_a}$ (bottom) for several values of $a$. Curves for $a$ = 0 and 2 are labeled, and intermediate curves correspond to $a$ = $\frac{1}{4}$, $\frac{1}{2}$, and 1. The mass per unit area $\sigma$ is defined for a line of sight that is normal to the shell. The normal direction to the shell may be obtained from eq. (6), using the relation $\hat{e}_n = \hat{e}_t$ x $\hat{e}_\phi$. If viewed from angle $\vartheta$ to the normal, the mass column $\sigma$ must be modified by a projection factor sec $\vartheta$ so long as the path length of the line of sight through the thickness of the shell is short compared to the shell’s curvature.

The exact amount of infrared radiation emitted is a function of speed and resulting temperature, it's not a means to calculate the energy from the bowshock nor is it consistent. It's a great means to visualize that there is bowshock, much as smoke or clouds help to visualize a plane's bowshock; at best it would be an indirect means to measure speed and energy.

In the monthly notices of the Royal Astronomical Society, Volume 441, Issue 1, 11 June 2014, Pages 809–812 article titled: "Detecting floating black holes as they traverse the gas disc of the Milky Way", by Xiawei Wang and Abraham Loeb they explain that bowshock can be unaccompanied by CSE and that the radiation isn't confined to the infrared bands.

"In this paper, we propose an additional observational signature of floating BHs, using the MW gas disc as a detector. As the BHs pass through the MW disc supersonically they generate a bow shock, which results in synchrotron radiation detectable at radio and infrared frequencies. ...

Observations of the Galactic disc can be used to infer $n_0$ and $T_4$. The BH speed $V_•$ can then be estimated from the Mach cone angle. The maximum Lorentz factor $\gamma_{max}$ can be inferred from the peak of the synchrotron spectrum. This, in turn, yields $B_{−5}$ based on equation (3). From the slope of the synchrotron spectrum, the power-law index $\rho$ can be estimated. Finally, with the above parameters constrained, the synchrotron flux can be used to calibrate $M_•$. The above interpretation can be verified by observing the properties of the star cluster carried by the floating BHs (O'Leary & Loeb 2009, 2012). The diffuse X-ray emission from the BH and synchrotron emission from the bow shock are supplemented by stellar emission from the star cluster around it. Since the total mass of the star cluster is much smaller than $M_•$, gravity is dominated by the BH, and thus the stars do not affect the bow shock. One can measure $M_•$ spectroscopically from the velocity dispersion of the stars as a function of distance from the BH, and verify consistency with the synchrotron flux estimate.".

Not the answer you're looking for? Browse other questions tagged infrared bow-shock .

2
What telescopes used 1000+ pixel Microwave Kinetic Inductance Detectors (MKIDs) for multispectral, single photon counting (time + energy of photons)?
2
How do the stars in the near-infrared (NIR) radiate?
2
How to calculate an infrared SED from the specific intensities?
3
Is it possible for a planet to heat up its moon to habitable temperatures solely through infrared radiation?
5
Solar Winds and Bow Shock Cause