I am a writer and space enthusiast. For a story I am currently writing I would like to have a planet which orbits a star which resembles the sun, which in turn orbits another star. In this situation there would be multiple types of "days" including "bright day," when both suns are visible, "dim day," when only the further sun is visible, and "day," where only the nearer sun is visible. Is there any way to determine how this cycle would work? Any formulas or papers done? If so, what information would I need to have to figure it out? Thank you.

Although this question would probably be more suited for the worldbuilding.se, you're asking for scientific references, so I guess this is ok to ask here.

What you describe is a hierarchical system, akin to Sun-Jupiter-Anymoon. I assume the planet orbits star $S_1$ directly, and $S_2$ is the larger star, and the planet will be abbreviated with $P$.

Once you have some numbers for the constants, you can use python, or any other routine, in order to investigate the behaviour of your day/night cycles. Here it is important that your routine can replace the negative contributions in $I(t)$ with zero values, otherwise the negative values of $I_1$ could 'eat' the positive values of $I_2(t)$ and instead of perpetual day you'd get a perpetual night from the formula, when P would be directly between $S_1$ and $S_2$. In python you would do this via some command like "I_updated = [0 if i < 0 else i for i in I_raw]", where "I_raw" would be the values from the individual $S_1$ or $S_2$ contributions, before summing them up to $I(t)$.

If you want to know 'which sun is up' at any given moment, you can plot the sinii separately.

This quickly scribbled formula ignores possible 3D-effects on the illumination, such as a possible Kozai resonance in your system, but also misrepresents 'shadowing' of $S_2$ by $S_1$. Therefore the formula represents a very slightly inclined orbital plane w.r.t $S_1$.

Please observe that your system, as you want to build it, might not be stable for too long:
For the hierarchical structure of your orbits to exist, the stars must have a mass ratio of at least $m_2/m_1\approx 23$. If $m_1$ is a sun-like G0 star, then $m_2$ will be an O9, which has a lifetime of only 4 million years on the main sequence.
However, if you assign $m_2$ to be the G0 star, then $m_1$ could be a M2 dwarf, and that should work out fine. Also remember, that in your chosen configuration, there's always one part of the planets orbit around $S_1$, namely when it's exactly between $S_1$ and $S_2$, where the whole planet experiences perpetual day, and depending on the choice of stellar type, might get quite cooked.

The thing to calculate is the angular distance between the primary sun and the secondary. We can measure the day as an angle $\theta$ (say $\theta=0$ at dawn, $\theta=\pi/2$ for noon, $\theta=\pi$ for dusk). So we can set $\theta(t)=(2\pi/d) t$ where $d$ is the length of a day. Let us assume the secondary is an angle $\alpha$ ahead of the primary.

Then it will rise when the primary is at $\theta=-\alpha$ (dim day dawn), the bright day starts at $\theta=0$, ends at $\theta=\pi-\alpha$ and becomes dim day, and then at $\theta=\pi$ it becomes night. If $\alpha$ is small there will be brief dim day periods and the rest is bright day or real night. If $\alpha$ is larger there will be more dim day and less bright day and night, until we reach $\alpha=\pi$ when there is constant dim day. Beyond this we return gradually to the original state. The image below shows the different states, with blue for night, green for dim day, and yellow for bright day. 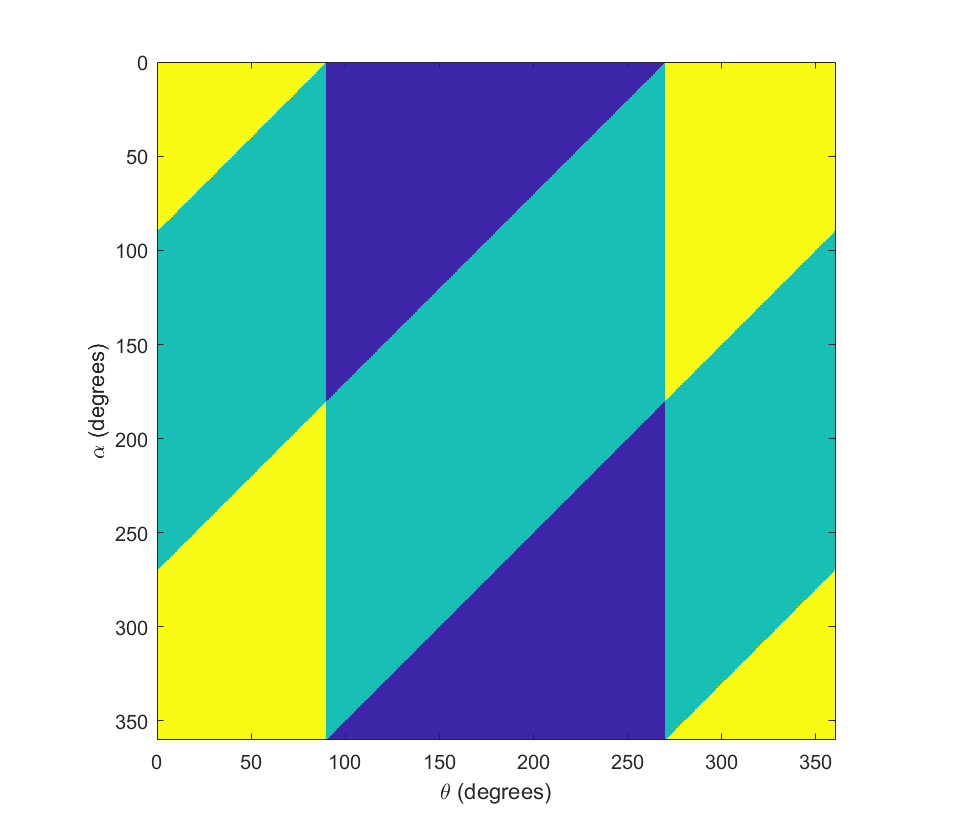 So if we set $a=10$ AU and assume $\mu=1 M_\odot$ the period is 31.6228 years. So basically we will run through the above diagram from left to right every day, slowly rising over a period of 31 years. The amount of dim day rises linearly with time, until it is 100% halfway through, and then it declines linearly again.

Not the answer you're looking for? Browse other questions tagged orbit binary-star orbital-elements or ask your own question.

2
Complex life in binary black hole - Sun(s) system
1
Day/Night Cycles and Seasons if the Earth's Rotational Axis and Orbit Changed
0
Eccentric Earth Orbit and Day/Night Cycles
1
The consequences and the mechanisms of a shift of the Earth away from the sun
4
Is it possible for a planet to have multiple moons in a nearly stationary orbit?
2
Various moon orbits
2
In System KIC 9246715, How Far Does One Star Orbit the Other?
2
Can there be a three-moon system where only two are visible most of the time?
3
Do moons experience periods of no sunlight when orbiting "behind" their planet?