Can expansion of space blueshift galaxies with respect to one another?

Suppose we have two galaxies in an otherwise devoid space, and suppose the galaxies are gravitating. Suddenly, dark energy kicks in, and accelerated expansion of space begins ... 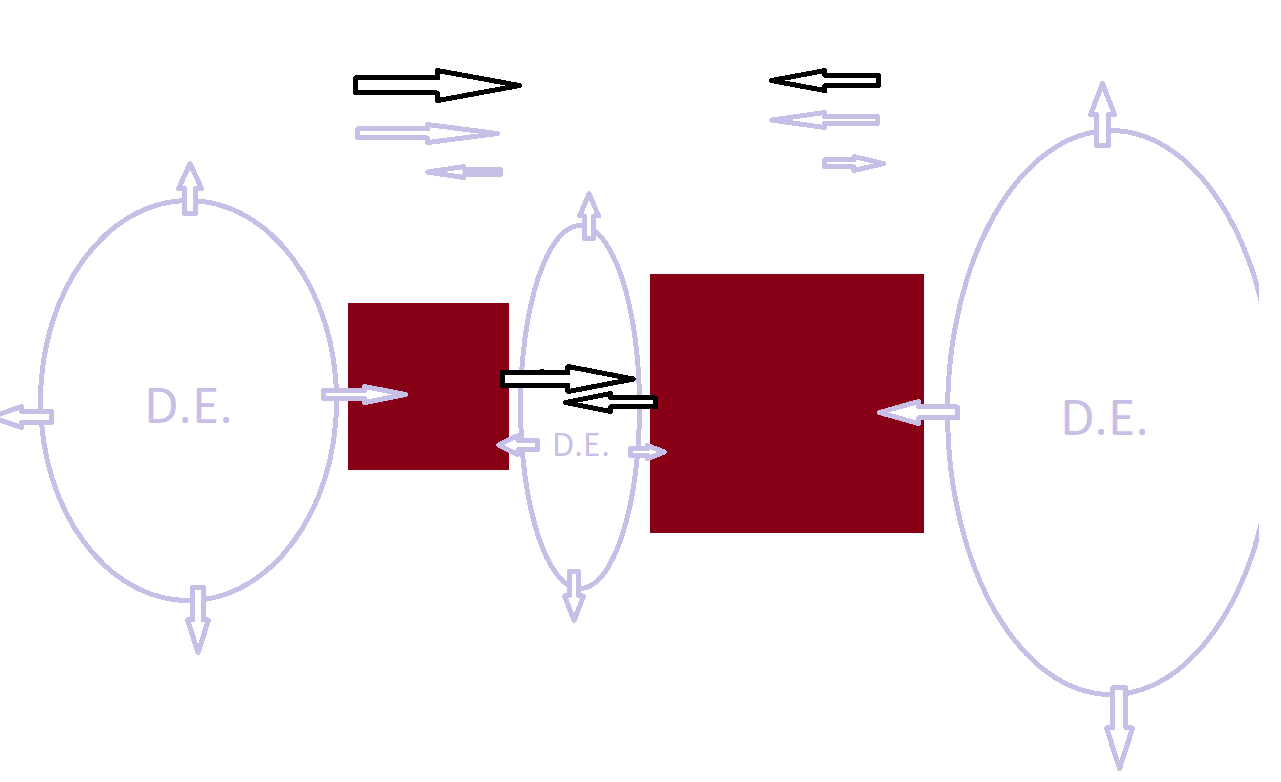 Because the galaxies are gravitating, dark energy between them expands space less, while "behind" the galaxies, where their mutual gravities don't overlap as much, dark energy exhibits a greater effect. The arrows above the galaxies compare force vectors. The black arrows are forces of gravitational attraction, the violet arrows are forces of expansion. Eyeballing the vectors' sum for each respective galaxy, it seems that the galaxies get an extra kick of acceleration from the regions of greater expansion behind them.

If we play the movie in our heads with these assumptions: the galaxies start off by accelerating toward one another under their own mutual gravitational attraction (each observes a blueshift), then dark energy kicks in and the galaxies accelerate with more energy than can be accounted for by acceleration due to their own gravities alone (blueshift observed much greater than it should be).

I have always read and heard of redshifted galaxies, not blueshifted ones (well, not so much, anyway), so something must be wrong here.

Question: Can the expansion of the universe drive two galaxies together like this? Does the net effect of expansion behind and between the galaxies cancel out, resulting in no greater acceleration? Have I got this all wrong?

Expansion will still redshift the light from these galaxies.

The universal expansion, at least by my understanding, isn't so much a force that pushes these galaxies further apart, but instead creates additional space everywhere, constantly. This includes the space between the galaxies that are approaching one another.

The light travelling from one galaxy to another will be affected by this expansion, since the space that light and matter occupy is also expanding. The result is that light "stretches" as it travels, lengthening its wavelength, because the space between one wave's crest and the next is expanding. Since that light continues to travel at a constant speed, these crests will never speed up or slow down to "catch up" with their original wavelength, so the lightwave gets stretched into a longer wavelength with lower energy - that is, it gets redshifted.

For further clarification, the fact that there is a larger amount of expansion happening "behind" these galaxies has no effect on the expansion of the space between these galaxies. It's not so much a force that pushes all matter away from each other, but the literal creation of more space at all points in space all the time.

Creation of vs expansion of space

Now, there seems to be semantical ambiguity on this subject (or I may simply have an insufficient understanding of the subject - a very likely scenario) concerning the idea of dark energy as a force. Many interpret it (I think) as being a force that pushes matter away from other matter, but I don't think that's what it is. From my understanding, it seems more like a force that pushes space itself away from the surrounding space.

Following this thought experiment, we find that, counterintuitively, this dark energy remains at a constant density. That is to say, these points are pushing the surrounding space away at the same rate as before, in spite of now being more spread out, and the "new" points between them are also now pushing the space surrounding them away at the same rate. Now, if the density of dark energy remains constant while the space it occupies is expanding, that can only mean that there is now more dark energy between the two original points than there was before.

This is why I like to say that space is "created" rather than simply expanded. It makes it easier for me to conceptualize. If space is thought of as the thing that creates dark energy (whatever it is), and that energy doesn't lose its density when space expands, then it makes sense to me to say that there is now more space there than there was before. To be honest though, I don't actually know what terminology is primarily used among those who regularly study this, just that this way of thinking makes it easier for me to conceptualize.

Disclosure: I am not an expert or even particularly knowledgeable on this subject. If I have made mistakes here, others should feel free to offer corrections. My answer is based on my own understanding gained from my own limited studies of this subject, and I won't pretend to even begin to understand the mathematics behind any of it.

Not the answer you're looking for? Browse other questions tagged expansion dark-energy blueshift .

11
When the universe expands does it create new space, matter, or something else?