Why is 3D real space ever even considered? Is it some kind of highly idealistic cosmology-dependent only scenario, ignoring peculiar velocities?

3D real space is the actual distance, position, velocity, (even spin), etc. of an object; this can be used to measure Earth's distance to our Sun or another planet's distance to its Sun.

3D redshift space is the apparent distance, a distorted view by which one can compare one object to another. The distortion is caused by varying density of the interstellar medium, gravity, motion of Earth and the objects being viewed, even dark matter, etc.

The real distance between two objects can, for example, affect each other by gravity; this alters the trajectory of the objects. The apparent distance has no effect on gravity, only the real distance.

By comparing the real distance, obtained by making calculations, with the apparent distance, obtained by making observations, we can compare what we see with what we calculate; this permits checking the theory, finding new objects (or phenomena, such as suggesting that there is dark matter). This gives us the path lengths for each direction and distance (because distance varies depending on direction and distance due to gravity).

A more complicated explanation is offered in: 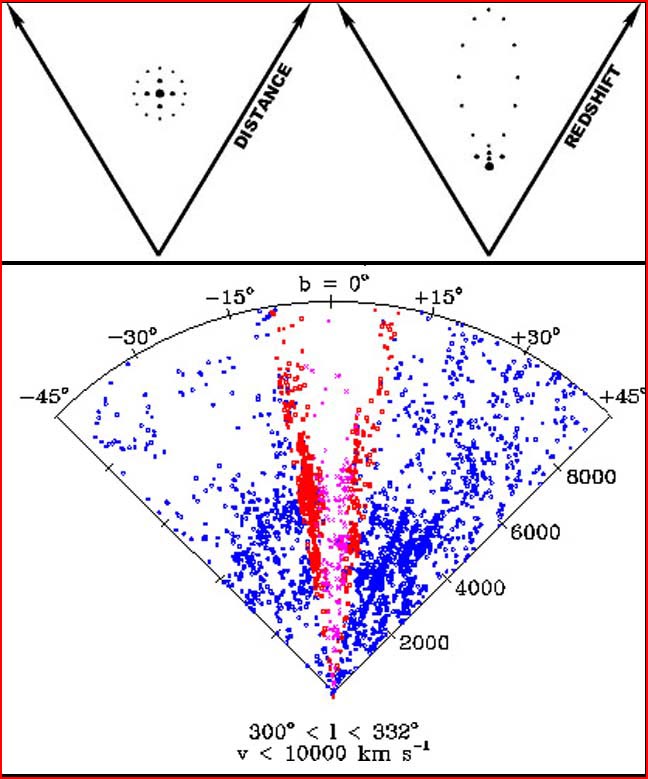 Our position (the Earth) is at the bottom point in all cases. Distance (away from the Earth) is measured along the straight edges. In the top left image, we show what a galaxy cluster in Arp's universe would look like without the big bang perspective. It is a family of galaxies and quasars and gaseous clouds of mixed redshifts (in the top diagrams, the large dots are low- redshift, the medium-sized dots are medium-redshift, and the small dots are high redshift). At the center, there is a dominant galaxy -- it's usually the largest galaxy, and the galaxy with the lowest redshift of the cluster. This galaxy is surrounded by low-to-medium redshift galaxies, and toward the edges of the cluster we find the highest redshift galaxies, HII regions, BL Lac objects and quasars.

The image to the right shows what happens if we try to force the same galaxy cluster into a redshift-equals-distance relationship. The cluster becomes distorted. What was once a sphere becomes an elongated bubble. The central dominant galaxy drops to the front of this bubble, followed by a spike of low-to-medium redshift galaxies stretching away from the earth and "bubble and void" of high redshift objects.

Every cluster in the sky does this, like fingers of god pointed at the earth from every direction. The third image is a 90 degree slice of the sky showing all galaxies arranged according to their redshift- determined distances. The Fingers of God distortions show clearly, each representing a single galaxy cluster. (The bubbles and voids are not as clear, because this chart cuts off before it gets to high redshift.) Everything points at the Earth.

Without the redshift-equals-distance distortion, a new picture of galaxy clusters and the universe itself is revealed. The age of the universe is no longer known, because we no longer have a constant expansion to backtrack to a bang. The size is also unknown. Most quasars and some galaxies that we see are closer than we thought they were, because they have been distorted by the Fingers of God. But we have no idea how far the universe stretches beyond our telescopes' limits.

Not the answer you're looking for? Browse other questions tagged cosmology expansion redshift dark-matter n-body-simulations .

6
Heavy star and redshift
2
Difference in redshift between 2 interacting galaxies
1
Hubble law, cosmological redshift and distance
3
Does wavelength affect redshift caused by the metric expansion of space?
1
Relationship between photometric colour and redshift
9
Cosmological redshift vs doppler redshift
2
Redshift and Velocity relation
12
Why do people choose 0.2 as the value of linking length in the friends-of-friends algorithm?
12
Is there physical evidence to distinguish between the expansion of space and an anthropocentric universe?