Estimating a star's radius, temperature, and luminosity based on its mass

(See updated figure and description below.)

I've been trying to generate ballpark estimates for the radius, temperature and luminosity of stars in the main sequence based solely on their masses (assuming the same composition for all stars). The idea is to iterate through masses in steps of, say, 0.1 solar masses from 0.1 to 100, and roughly trace out the curve of the main sequence on an HR diagram.

And, using these, I'm calculating the temperature from the luminosity-radius-temperature relation like this:

where sigma is just the Stefan-Boltzmann constant.

All of this works about as well as I'd expect for stars of 1 solar mass or above, but breaks down completely for M dwarfs, as you can see from the attached image which shows my meager effort superimposed on HYG data. 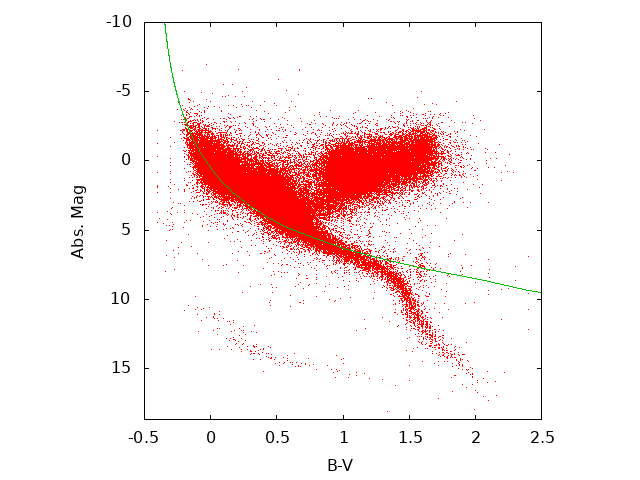 Note that I'm plotting B-V here, calculated from temperature like this:

What can I do to improve this a little? I'll add that this is aimed at being part of an exercise for undergraduates who are beginning programmers, so I'm looking for simple ballpark approximations, not anything fancy.

Update: Based on Rob Jeffries' recommendation below, I took a look at the Mamajek data. Here's a plot of B-V versus temperature from that data: 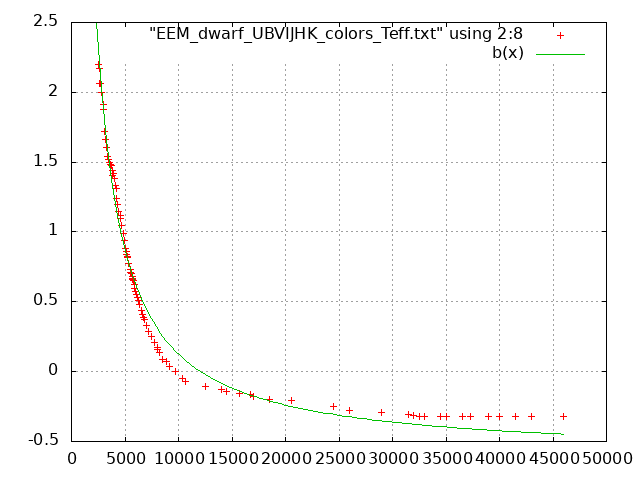 I've superimposed a fitting function of the form:

where the best-fit parameters are:

Using this function to calculate B-V moves my numbers in the right direction, but it still doesn't quite do the trick, as shown in the figure below (the new B-V values are the curve that's lower on the right-hand side): 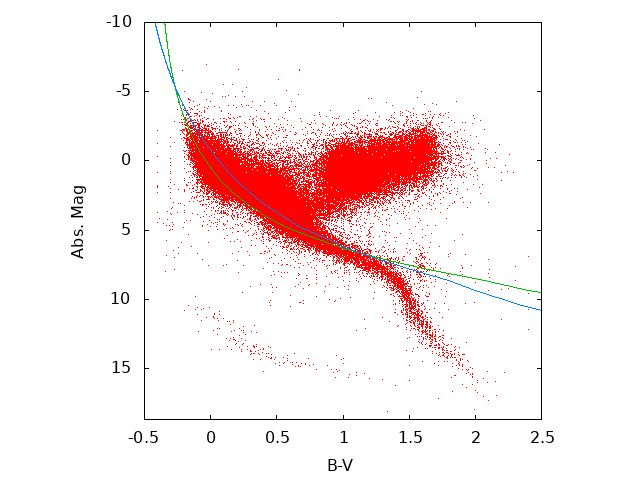 You could plot $L$ vs $T$ and compare your model result to the measured/estimated $L$ and $T$ of main sequence stars?

You have not explained or labelled what your diagram is, but it isn't $L$ versus $T$; I suspect that it absolute $V$ magnitude versus $B-V$ colour.

The transformations between $L,T$ and $V$, $B-V$ are highly non-linear, especially at low temperatures (which is why your plot fails to reproduce the M-dwarfs) and involve folding a model atmosphere through some standard filter responses or using relationships between $T$ and $B-V$ and bolometric corrections and $T$. (e.g. Mamajek 2019)

EDIT: For the clarified question.

Your relationship for $T$ vs $B-V$ is not applicable at lower temperatures.

The solution is to construct relationships that are valid over the full range of temperatures using the resource I referenced above.

Not the answer you're looking for? Browse other questions tagged star temperature star-formation luminosity hr-diagram .

1
Is there a formula to calculate any star mass from Luminosity, Radius, and/or Temperature (K)?

7
Accurate way to programmatically generate a main sequence star?
9
Is there anywhere I can find some kind of database on all known stars and their properties (mass, surface temperature, radius, and luminosity)?
1
Mass, Radius, Colour, Size, Type of a Star from the Hipparcos Catalog
1
H-R diagram, Double stars
3
Given a star's mass, age, and composition, how do I calculate the rest of its properties?
6
Is there a way to factor age into the mass-luminosity relationship for stars?
11
Is there a relation between mass, radius, and luminosity in deuterium-burning brown dwarfs?