I'm curios if there is a way to test if this sample might be Martian andesite.

What type of oxygen isotope (or other) test can be done to address this in some way?

As background, any information about such tests at the University of Utah would also be helpful to know. 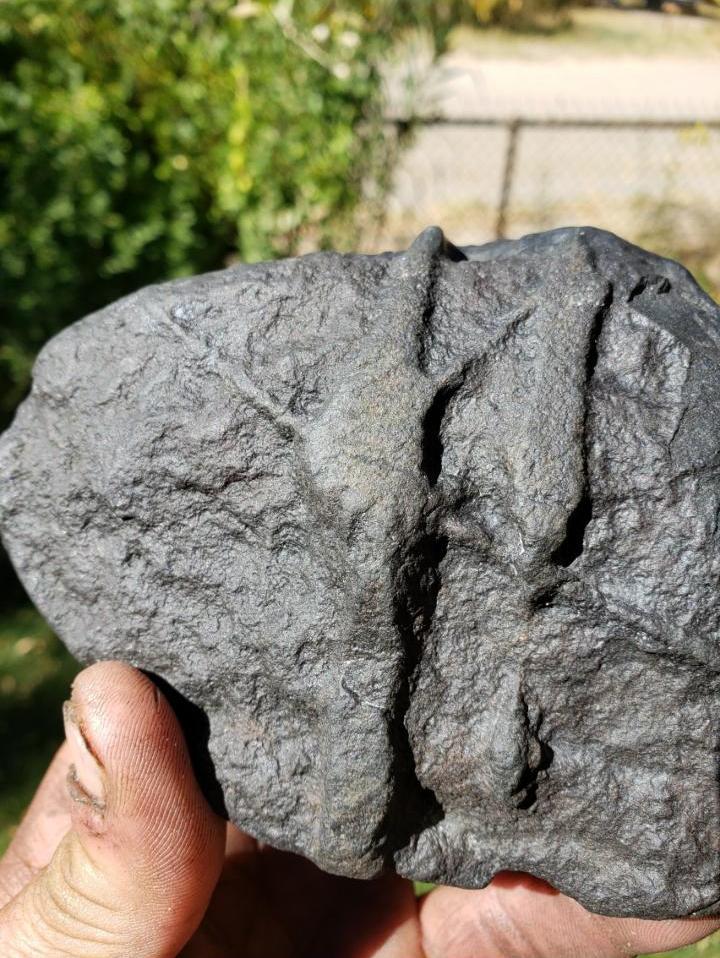 There is a long "Meteorite Realities" page and a shorter, graphical "Self-Test Check-List" that it would be good to check and go through before it gets to chemical testing.

If you are determined to get testing done, the same meteorites.wustl.edu site on its page on meteorite chemical composition recommends chemical testing by Actlabs; there is more information on what they need (a 5g sample) and the type of tests to ask for on this page. Andesite is a type of basalt formed by volcanism and while it is true that most of the Martian meteorites are basalts (as discussed here), so are a lot of Earth rocks. On the chemical composition page, in plots of chemical composition such as silicon dioxide (SiO$_2$) vs total iron and magnesium oxide content e.g.

the martian meteorites (red squares) separate from most terrestrial/Earth rocks and the "meteorwrongs" (white circles) due to having higher iron+magnesium content in the form of pyroxene, olivine and ilmenite (from 'Chemistry' section of How Do We Know That It’s a Rock from the Moon?) However as noted on the basalt page:

Unfortunately, the only way to distinguish a terrestrial (Earth) basalt from a basaltic meteorite (Moon, Mars, asteroid) is with expensive chemical and mineralogical tests. If you find a basalt, it's probably not a meteorite.

So I would guess that these additional tests for the contents may be enough to distinguish a non-Earth basalt from an Earth one when the appearance to the eye or under a microscope is very similar (due to the similar formation mechanism via lava). However additional tests needed for trace elements may also be needed (Lunar basalts are Chromium-rich but have much lower concentrations of the alkali elements of potassium, sodium, rubidium, and cesium)

Only two meteorites have been found on Earth that are composed of andesite. They were found at the Graves Nunataks ice shield in Antarctica during a US Antarctic search for meteorites in 2006/07. The meteorites are labelled GRA 06128 and GRA 06129.

Geologically, the samples are unusual because they are rare samples of felsic crustal material and they are extraterrestrial. Another thing that makes them unusual is,

The low NiO and low Fe/Mn of the mafic minerals in GRA suggest that its source was depleted of Ni and Fe relative to a chon-dritic precursor. Such depletions in eucrites and Martian rocks are interpreted to reflect segregation of metal via core formation; a similar inference could be made for the GRA parent body.

Sourced from a NASA Technical Report.

By measuring the radioactive decay of elements in the meteorite ...

shown that the rock must have formed around 4.5 billion years ago, when Earth and the other planets were coalescing.

Chemical analysis for martian andesite for sio2 is 55.00 - 65.00, not anywhere close to korotevs out-dated charts. My number is sio2 59.32, the only number that brings up martian andesite when googled.

Can anyone help me on where I could get a noble gas analyzed or a microbe spit analysis on pyroxene?

Not the answer you're looking for? Browse other questions tagged asteroids meteorite astrochemistry planetary-science or ask your own question.

18
What is the difference between asteroids, comets and meteors?
11
How do scientists know that a rock found on Earth came from Mars?
0
Why are we so quick to proclaim the geological inhospitability of other planets based on extremely minimal information?
11
Are there Earth rocks on Mars?
4
Is it possible to find what crater the Mars meteorites come from?