Do Electric Charges in the Van Allen Radiation belt move in Opposite Directions?

A Van Allen radiation belt is a zone of energetic charged particles, most of which originate from the solar wind, that are captured by and held around a planet by that planet's magnetic field.

The term "energetic charged particles" hinted to me that these charges are in motion and in very large velocities.

Let us assume, a small portion of space in the Van Allen Radiation Belt, compared to the size of Earth. We can assume the magnetic field in this space to be uniform due to our previous assumption. From the formula for finding Magnetic force on moving charges, $$\vec{F}=q(\vec{v}\times\vec{B})$$ where $\vec{F}$ is the magnetic force on the charged particle, $q$ is the electric charge of the particle with an appropriate sign, $\vec{v}$ is the velocity vector and $\vec{B}$ is the magnetic field vector.

As per the above formula, the direction of force is dependant on the nature of charge as well as the direction given by the cross product. If we consider the charged particles to move with uniform speed, the net force acting on the charge must be equal to zero. I think we must neglect the gravitational force exerted by Earth on the charges since the mass of charges is negligible. The two forces, Centrifugal force and the magnetic force (exerted by Earth's magnetic field due to the motion of the charged particles) cancel each other when they have the same magnitude but opposite direction. From the formula, it is also evident that the direction of force changes with the sign of the charge. It must be opposite for positive and negative charges.

The following image (a view from the top of poles of Earth) depicts my idea on the sense (clockwise or anticlockwise) of rotation of charges in the Van Allen Radiation Belt: 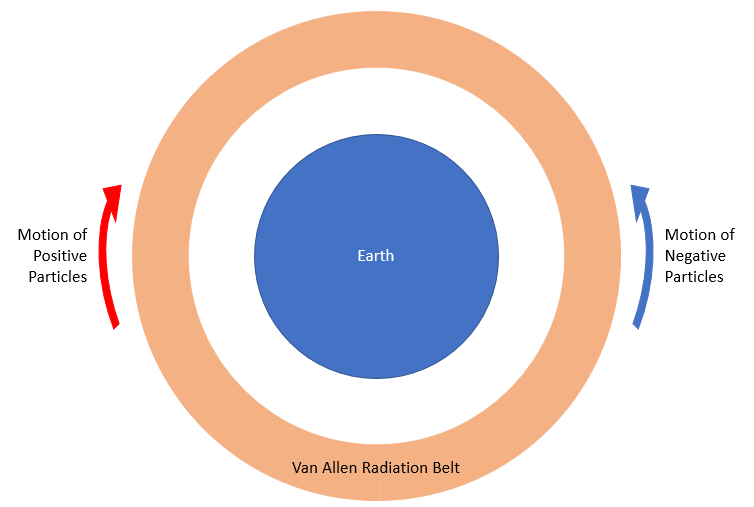 Yes and no. The question @JohnRennie links to in his comment Analogy between magnetic bottle and Van Allen's radiation belt contains a lot of relevant information, but packaged as an answer to this question.

The question correctly concludes that, at least in the plane perpendicular to the magnetic field, particles will travel in circles, and those circles will be in opposite directions, but they do not, generally simply circle around the Earth as you suggest. There are two reasons for this: firstly the magnetic fields are too strong, or the particles too light, so the circles you get are much smaller and secondly because they are also moving in the third direction. So you should think of them travelling in fairly tight spirals around the magnetic field lines, which, roughly speaking run between the North and South magnetic poles.

As they approach the poles, the field gets stronger (the lines bunch up) and it turns out that this repels the particles, so they end up bouncing back and forth between the two poles (all in spirals around the magnetic field lines). The protons and electrons do spiral in opposite directions.

Not the answer you're looking for? Browse other questions tagged radiation solar-wind .

4
What is the difference between solar wind and solar radiation?
3
Does the Sun have hard radiation?
4
What is the ratio of cosmic microwave background radiation to normal radiation?
2
How much heat is generated from waxing and waning of reflected radiation from the Sun?
6
Do other planets with a magnetic field also have two Van Allen belts?
3
Why is the cloud around Eta Carinae shaped the way it is?
4
Is there a connection between the solar wind and the cosmic radiation?
3
Why wasn't CHEOPS data taken during passage through the South Atlantic Anomaly downlinked in this case, resulting in gaps in photometry?