The aim of the five-year programme is to shed light on Dark Energy - the mysterious force thought to drive an accelerated expansion of the Universe.

The instrument effectively contains 5,000 mini-telescopes. Each one can image a galaxy every 20 minutes.

In just one year scientists will have surveyed more galaxies than all the other telescopes in the world combined.

I wonder if instead that it would be better to call them 5,000 mini-spectrometers or 5,000 mini-slits, but I'm not yet sure how this whole thing works.

Inside DESI are 5,000 optical fibres, each acting as a mini-telescope. This enables the instrument to capture light from 5,000 different galaxies simultaneously, precisely to map their distance from Earth, and gauge how much the Universe expanded as this light travelled to Earth.

The Dark Energy Spectroscopic Instrument (DESI) is a new instrument for conducting a spectrographic survey of distant galaxies. Its main components are a focal plane containing 5000 fiber-positioning robots, and a bank of spectrographs which are fed by the fibers.

Wikipedia does not always serve as an authoritative and accurate source, especially for details. Five thousand robots sounds like the name of a Kraftwerk album, and "bank of spectrographs" is less than fully quantitative. 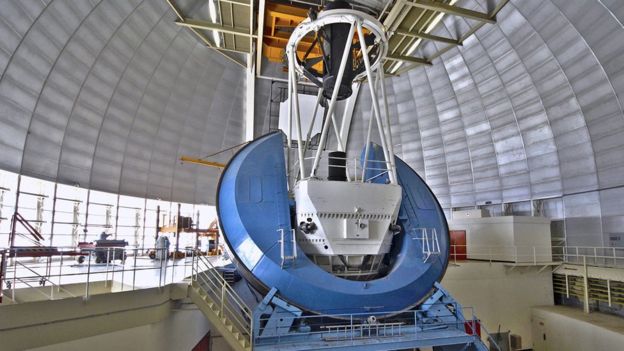 DESI will scan more galaxies in a single year than all the telescopes in the world combined, UCLA/ Lawrence Berkeley National Laboratory

This answer to What is the dimensions of the smallest object detectable by an optical fiber from a specific distance? shows several implementations of multiple optical fibers picking objects from a focal plane and bringing them to a spectrometer. However I don't think any of them come anywhere near to 5,000 separate fibers!

You can probably get most if not all of your questions answered by perusing the main DESI web site, which I encourage you to check out.

There is, for example, a nice video describing the assembly of the main focal plane elements (the fibers and the associated robot positioners) here.

But in simple terms: the circular focal plane is divided into ten wedges (or "petals"). Each wedge holds an array of 500 fibers and their associated robotic positioners. Each set of 500 fibers is collected at the back end and passed outside the telescope to a spectrograph, where the fibers are arrayed into a line to pass their light onto a slit. That is, there are ten separate spectrographs (that's your "bank of spectrographs"), each of which has a single slit with the light from 500 fibers passing into it. (Each spectrograph then has dichroics splitting the light from the slit into three different wavelength regimes and three different cameras, each with a different grating -- 360-555 nm ["blue"], 555-656 nm ["red"], and 656-908 nm ["infrared", though this is still handled by a CCD and it not really what modern astronomers usually call "infrared"]).

The fibers are pretty densely packed into the individual wedges, and so the robotic positioning is done by tweaking/wiggling each fiber a small amount around its default position within a circular hole (you can see glimpses of this in the video), rather than the wholesale movement of individual fibers across the whole focal plane that the 2dF instrument in your video link does. 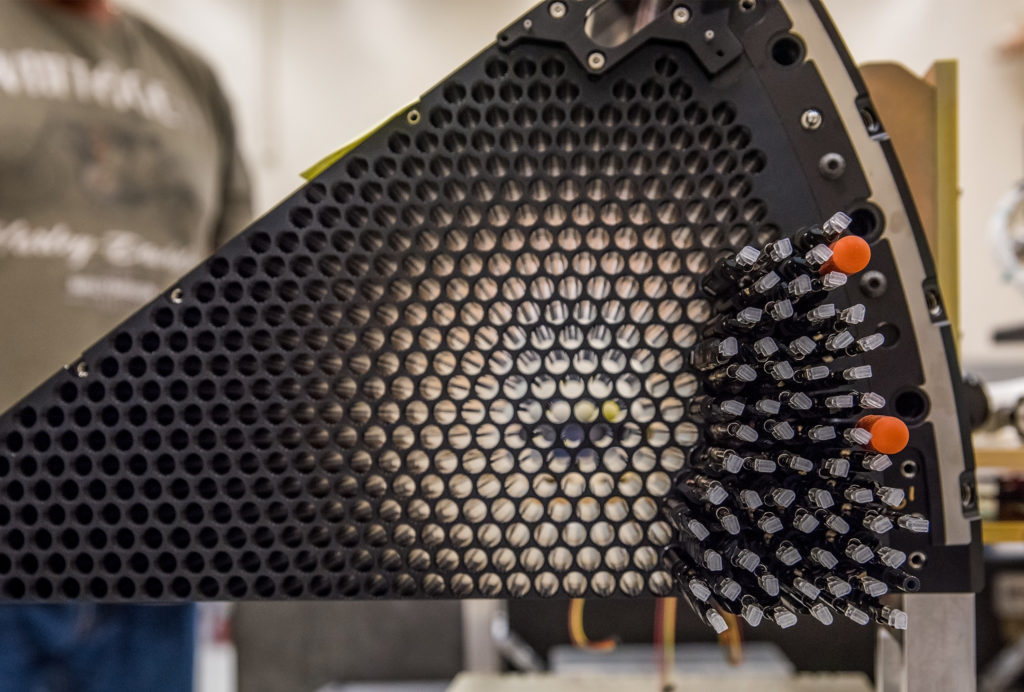 One of the ten focal-plane wedges of DESI, with about 60 (of its eventual 500) fiber-plus-robot-positioner elements inserted.

Supplemental to @PeterErwin's answer, some more details on the five thousand "robots".

Each fiber has a circular "patrol area" with a diameter of 12 millimeters, and these are located on a hexagonal array with a pitch (nearest neighbor distance) of 10.3 millimeters.

Motion is implemented with eccentric axis (╬śŌĆō╬”) kinematics. Instead of x-y or r-╬ś which use two and one degree of linear translation, two rotations are used, in a "shoulder and elbow" configuration.

That the fibers' range of motion overlap improves the probability of finding a target for each fiber, and reduces the dead space (area with no fiber coverage possible) to zero. The robotics systems are aware of the positions of adjacent fibers so collisions are avoided.

Here's a crop of a part of Figure 1 of the arXiv paper linked above, for a detailed view of the robot's (╬śŌĆō╬”) kinematics. 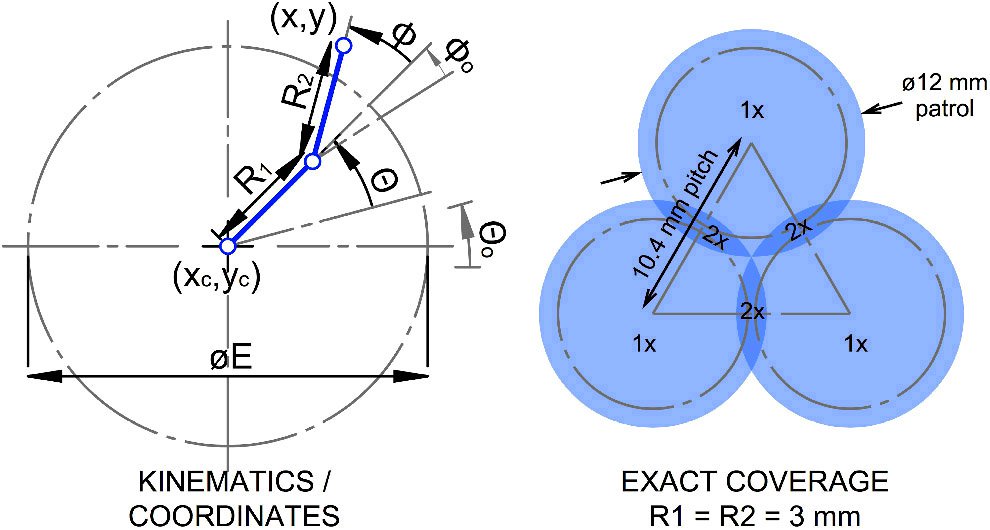 Figure 1. Left: Eccentric axis (╬śŌĆō╬”) kinematics. Whenever the ╬” arm (R2) is retracted within the dashed circle E, the positioner is guaranteed free rotation about ╬ś without obstruction from its neighbors. Right: The patrol region (the area within which every point can be reached by the robot) coverage extends beyond the pitch. This assures complete coverage but requires implementation of collision avoidance algorithms in the move control software. R1, R2: Kinematic lengths of the ╬ś and ╬” arms. xc, yc: Center of robot. x, y: Position of fiber. ╬śo, ╬”o: Home positions. 1├Ś, 2├Ś: Coverage by a single positioner and two positioners, respectively. 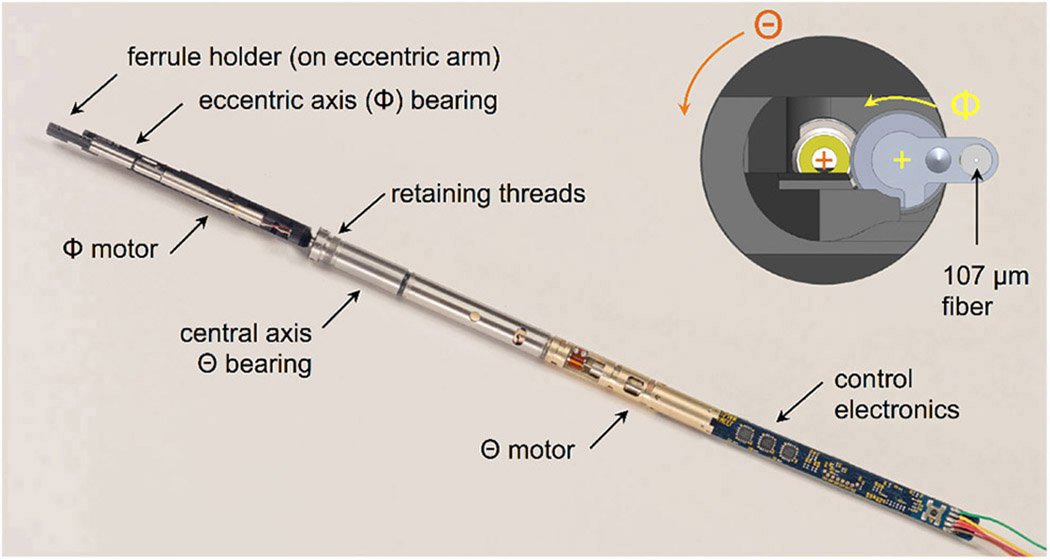 Not the answer you're looking for? Browse other questions tagged observational-astronomy spectroscopy spectra optics dark-energy .

1
Using optical fibers in astronomy
3
What is the dimensions of the smallest object detectable by an optical fiber from a specific distance?

5
What is a pupil slicer, and how does it work with anamorphic optics in VLT's ESPRESSO Echelle spectrograph?
8
Where exactly is the modification that first corrected the spherical aberration in Hubble's primary mirror?
3
What is the dimensions of the smallest object detectable by an optical fiber from a specific distance?
2
What would "the next GAIA"-like instrument be like? Could it simply be a 3 to 5x scaled-up version of the same beautiful system?
1
How did I flip some mirrors around in the dark at 3 AM and change the focal length of a 24 inch Boller and Chivens?
5
What (if any) capabilities of Hubble are unique and irreplaceable? What can it do that can't be done by any other ground or space-based telescope?
2
How the data collected during 5 year DESI operation will be analyzed with regards to finding what dark energy really is?
1
Using optical fibers in astronomy