Could a star closely orbit a black hole long enough for the star to have lost 0.5B+ years to time dilation?

I was wondering how stable a close star-black hole system could plausibly be, and thus how much time a star could plausibly miss out on (from an outside observer's perspective) due to being in an orbit at relativistic speeds around a black hole.

E.g. could there plausibly be a scenario where a star has only aged less than 13 billion years, but is in fact one of the universes's earliest Population II stars, because it has been in a fairly stable, close, rapid orbit around a black hole for the past few billion years*, and thus was subject to time dilation during a few billion years of orbits?

(*Or was orbiting a BH at some point, and escaped due to a chance interaction with a newcomer third body that tossed it out.)

Perhaps this would require a larger black hole, so that the tidal forces would be lower, which would presumably causing less gas stripping for an orbit that would result in the same time dilation? I realize that even well outside the photon sphere of a black hole, there can be decay of orbits due to gravity waves, but evidently there can be a counteracting separating phenomenon well, due to stars being stripped of some mass (e.g. as described in this report of a star orbiting a black hole at a velocity of about %1 of c).

So to put a number on this to make it more answerable, could a star plausibly orbit a black hole long enough and closely enough without spiralling in (or outward due to gas stripping) to make it half a billion years older in origin (according to the CMB rest frame) than it has experienced?

Yes, but not very likely.

Now, the gravitational wave emission from orbiting like this would no doubt sink the star. After all, stellar remnants starting at least part of an AU apart are merging today, and the emission scales up fast as one gets closer. Ergosphere processes might happen, but they also reduce $a$ and hence the time dilation.

In the comments of the other answer, the question came up whether decay of the orbit would limit the time amount of time dilation. The answer is of course yes. But by how much? This question can be answered using some modern results for the modelling extreme mass -ratio binaries in the limit of extremal spins.

The answer will depend crucially on ratio of the masses of the star and the supermassive black hole. So suppose, we take a supermassive black hole of $10^9$ solar masses with spin parameter $a=0.999$, and a solar mass star orbiting it in a quasicircular inspiral. The rate of decay of such an inspiral has been tabulated on the Black Hole Perturation Toolkit repository (See arXiv:1603.01221).

Using this information and the time dilation for circular orbits (also available form the BHPT), we can obtain the evolution of coordinate time as a function of proper time. The plot below plots the difference of the two, assuming the binary is currently at the last stable orbit. We see that the difference between the proper time experienced by the star and coordinate time experience by an asymptotic observer is about 1.2 Gyr over 13 Gyr (i.e. roughly the age of the universe). In particular, we see (somewhat to my surprise) that the 0.5 billions requested by the OP is entirely within the realm of possibility. (The 10+ billions suggest by the other answer however seems unreachable). 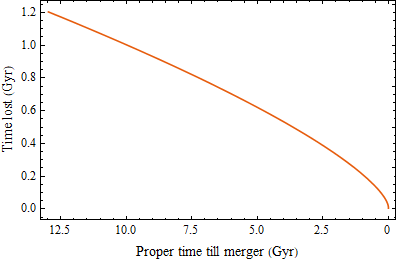 19
Maximum spin rate of a black hole?
2
Would studying massive stars that are experiencing time dilation due to proximity to a black hole be useful?

14
Would time go by infinitely fast when crossing the event horizon of a black hole?
1
Could we verify the structure of a black hole by observing an orbiting object?
5
What effect does time dilation have on bodies orbiting close to Black Holes?
6
What is the closest one could get to a black hole and still stand a realistic chance of escape?
4
How feasible is it that we could see the Central Black Hole Sgr A* occlude one of it's closely orbiting stars?
1
Could S5-HVS1 conceivably still hold on to any planets?
2
Would studying massive stars that are experiencing time dilation due to proximity to a black hole be useful?
0
Most time dilation possible outside of the event horizon?