What is the least dense exoplanet?

An exoplanet with density 0.31 grams per cubic centimeter has been found. Is this the least dense exoplanet we know of?

The article you link to refers to Borsato et al. 2019, which attempted to rectify discrepancies in the measured properties of planets in the Kepler-9 system between transit timing variation measurements and radial velocity measurements. They arrived at $\rho\sim0.31^{+0.05}_{-0.06}\text{ g cm}^{-3}$ for Kepler-9c. However, Borsato et al.'s Figure 10 shows that there are other exoplanets in this mass regime with substantially lower densities, e.g. WASP-107b, which comes in at about $\rho\sim0.19\text{ g cm}^{-3}$: 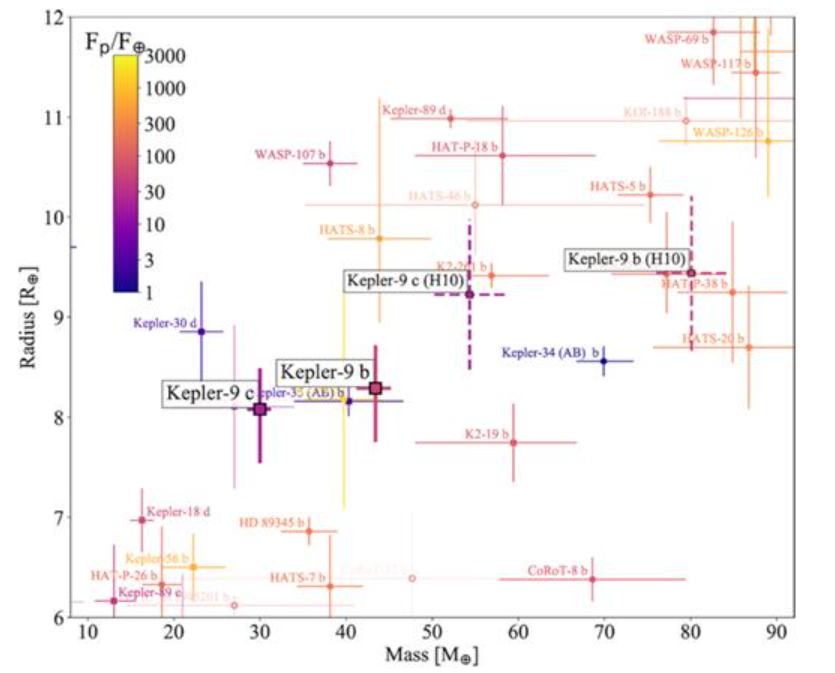 Not the answer you're looking for? Browse other questions tagged exoplanet density .

15
What is the most dense object in the universe?
6
Does the sun blow a bubble into the interstellar medium?
5
Could diatom blooms affect albedo of an exoplanet?
0
Calculate mass of exoplanet from transit method
2
Calculating the Solar Day of an Exoplanet?
1
Why does one presume that there is at least one Earth-like exoplanet around one in five stars?
3
The reason for an exoplanet density increase of planets closer to a star
3
What is the densest known exoplanet?