The colour of blue dwarf stars

The paper "M dwarfs: planet formation and long term evolution" describes blue dwarf stars, a hypothetical next-stage in the lifespan of red dwarf stars within a certain mass range, after which they become white dwarves.

(Hypothetical because the universe is not old enough for any red dwarves to have reached this stage.)

The Hertzsprung Russell diagram on page 917 of this paper, if I've interpreted it correctly (I'd never seen one of these until recently!), shows red dwarves in the 0.14-0.16 solar mass range progressing further away from the "red" end of the spectrum and in the direction of the blue. But it does not actually depict their surface temperature reaching - or indeed exeeding - 9000K (spectral type A, instead of the B or O-type that are normally considered blue enough to justify the name.) 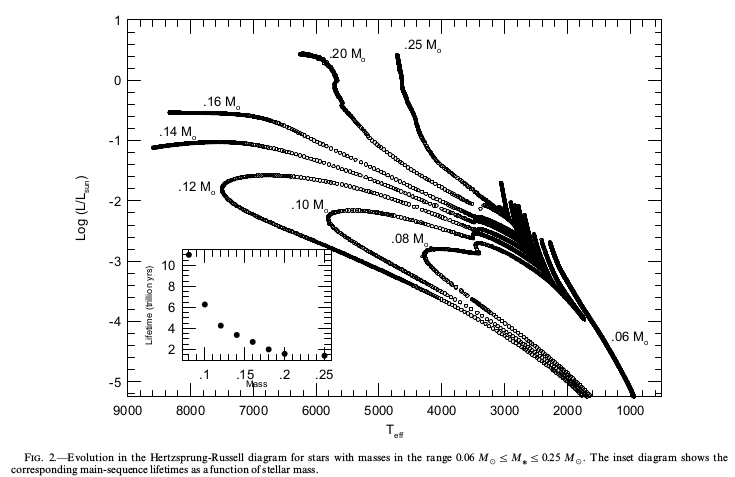 Am I correct that "blue dwarf" stars would not, according to this paper's H-R diagram, actually ever get past "white", and are thus named because they've moved a long way from the red end of the spectrum toward the blue? I have seen different colour charts depict different levels of blueness for the O, B and A types while researching this question, although the majority consensus seems to be that A types are almost entirely white with only a very small amount of blue.

(The same Hertzsprung-Russell diagram is also shown on page 424 of the 1997 paper "The End of the Main Sequence", if that helps at all.)

I emailed the authors of the paper, asking whether blue dwarf stars could

and one of them replied:

"We use the term 'blue' to mean 'bluer', so that when stars become blue, they get hotter than their usual main sequence temperatures. ... The point of the paper is that smaller stars get bluer ... But 'blue' does not correspond to a particular temperature, and does not mean 'as hot as an O star'."

So it looks like I read the H-R diagram correctly. For the stellar masses represented therein, none of the blue dwarf stars actually reach a high enough surface temperature for type B or O, and white type A stars are the closest any of them will come.

However, that doesn't answer the question for stars with stellar masses not represented in the diagram, for example $0.15M_☉$, $0.13M_☉$ or $0.135M_☉$. The authors of the paper didn't run their simulation for these, and there doesn't seem to be enough information in the diagram to make deductions regarding their suface temperature. So until more research is done in this area, the question of whether any blue dwarf stars can actually become blue remains unanswered.

Not the answer you're looking for? Browse other questions tagged star stellar-evolution white-dwarf red-dwarf dwarf-star or ask your own question.

10
If Sunlike stars become a red giant and eventually a white dwarf, what do red dwarfs become?

3
Black dwarf binary systems
5
death of a red dwarf star / minimum mass needed for a white dwarf?
13
Is "Main Sequence" a temporal sequence?
4
How bright can white dwarf stars glow as they accrete matter?
3
Is there a way to estimate the age of M dwarf stars?
0
Solar Spectral Types and Dwarf Stars
16
How long does it take for a white dwarf to cool to a black dwarf?
3
Lifespan of B-type subdwarfs
10
If Sunlike stars become a red giant and eventually a white dwarf, what do red dwarfs become?