How often are there lunar eclipses on Jupiter

For the Earth-Moon system, the orbit of the Moon is at a slight incline compared to the plane of the ecliptic. This incline is enough for there to be eclipses roughly twice a year rather than every lunar month.

But Jupiter is much bigger, so its shadow is bigger also. So it seems more likely for a satellite to go into its shadow. How often does this happen?

Every Galilean moon and inner moon go into lunar eclipse once per orbit.

How often is there a lunar eclipse of the Jovian moons?

I set up a little animation of the Galilean moons (I didn't include the inner moons), and made a few assumptions (negligible moon size, sun at infinity, perfectly circular orbits) and found that there is a lunar eclipse in the Jovian system just under 10% of the time.

Here's a bigger version of the second graph. 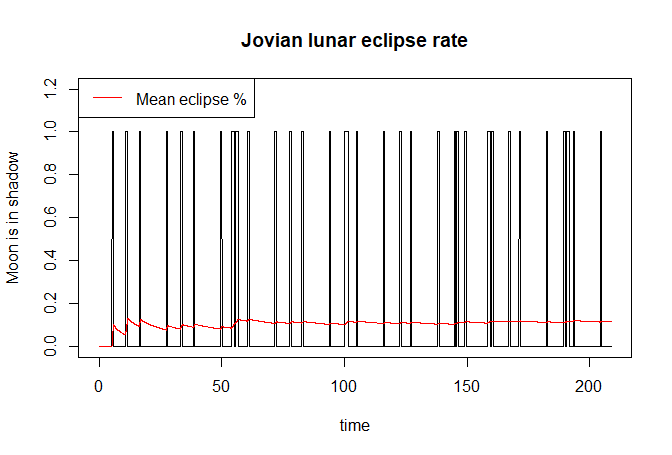 The orbits of the Galilean satellites have a roughly 2° incline.

Therefore, the Galilean satellites pass in the shadow of Jupiter once per orbit around Jupiter. This means that there are eclipses on a daily basis.

For satellites with a more inclined plane like Themisto and Himalia, eclipses will happen less often, perhaps every six years (half of a Jupiter revolution).

NOTE: This (non)-answer is wrong, because it only computes when an Io-centric viewer sees at least a partial solar eclipse:

This not an answer, but, if you're extremely interested, you can use https://wgc.jpl.nasa.gov:8443/webgeocalc/#OccultationFinder with these parameters:

and others (you'll need to fill in other boxes, but that's fairly basic), you'll see when Jupiter blocks the Sun as viewed from Io, which means the Jovians will see an Io-nian lunar eclipse. You can use similar techniques for the other moons and/or use the CSPICE libraries (see http://astronomy.stackexchange.com/questions/13488/) to make your own calculations.

NOTE: for observer, make sure to use Io the moon, not Io the asteroid. The one with a number in front of it is the asteroid.

Of course, you could also use a planetarium program (like Stellarium) that lets you view the sky from Jupiter's moons (or even Jupiter itself-- I'm not sure Stellarium computes lunar eclipses, but it should)

One final thought: in theory, one Jovian moon could eclipse the Sun as viewed from another Jovian moon -- not sure if that counts as a lunar eclipse (can't happen here on Earth since we have only one moon).

NOTE: Of course, this question can be extended to "when seen from X, how often does Y appear to be obscured, even partially, by any third object Z". Simple observer Earth examples:

Note for a lunar eclipse, we say that observers on the Moon see the Earth eclipse the sun, darkening (portions of) the moon, which means Earth viewers see Earth's shadow on the Moon.

This should be solvable by running through all the combinations in CSPICE, but it might be useful to find "interesting" obscurations such as where X, Y, or Z is a planet and/or a large planetary moon.

Not the answer you're looking for? Browse other questions tagged jupiter eclipse-non-earth-related galilean-moons or ask your own question.

4
When will the next series of mutual eclipses of Jupiter's moons begin?

4
Was there ever a Jupiter transit or Saturn transit?
9
How was Jupiter formed
8
How long is a “lunar month” in Jupiter?
3
Are there known centaurs which orbit between Jupiter and Saturn without crossing their orbits?
3
How long do solar eclipses last on Metis?
5
How much rock has Jupiter “swallowed”?
15
During solar eclipses on Jupiter, can the moon(s)' shadow(s) on the surface be seen from Earth with a telescope?
24
Can a planet in our system eclipse the sun as seen from another one?
5
Solar wind, Earth wind and planetary winds?
2
How big and how far away would the moon be if earth was the size of Jupiter?