What percentage of a spiral galaxy is the center/bulge?

Is there a credible source that can tell me how big the bulge of a spiral galaxy is compared to the rest of the galaxy? Unfortunately, I could not find any.

The term you're looking for is called the bulge-to-disk (size) ratio. Sort of by definition, the answer depends on the morphology of the galaxy, i.e. how "late-type" spiral it is. "Sa" spirals are the ones that resemble ellipticals the most, and hence have large size ratios (of order, but below, unity), whereas bulges in Sc galaxies are (less than) one-tenth the size of the disk.

(EDIT: In fact, the way you phrase your question, you're looking for bulge-to-total, rather than bulge-to-disk, but there's a 1:1 correspondence between. Also, in retrospect I think you're interested in the mass ratio, but I interpreted "how big" as the size ratio. Peter Erwin's answer discusses the masses.)

The ratio is obtained by fitting the luminosity distribution of the bulge and the disk separately. Typically both are fitted as exponentials, with scale lengths $R_\mathrm{b}$ and $R_\mathrm{d}$, respectively, but other forms (e.g. Sérsic profiles) are also used. In this case, the effective radius $R_\mathrm{eff}$ is used, i.e. the radius inside which half the light is emitted. Furthermore, the answer will depend the band in which you observe the galaxy (i.e. IR, optical, UV, …) 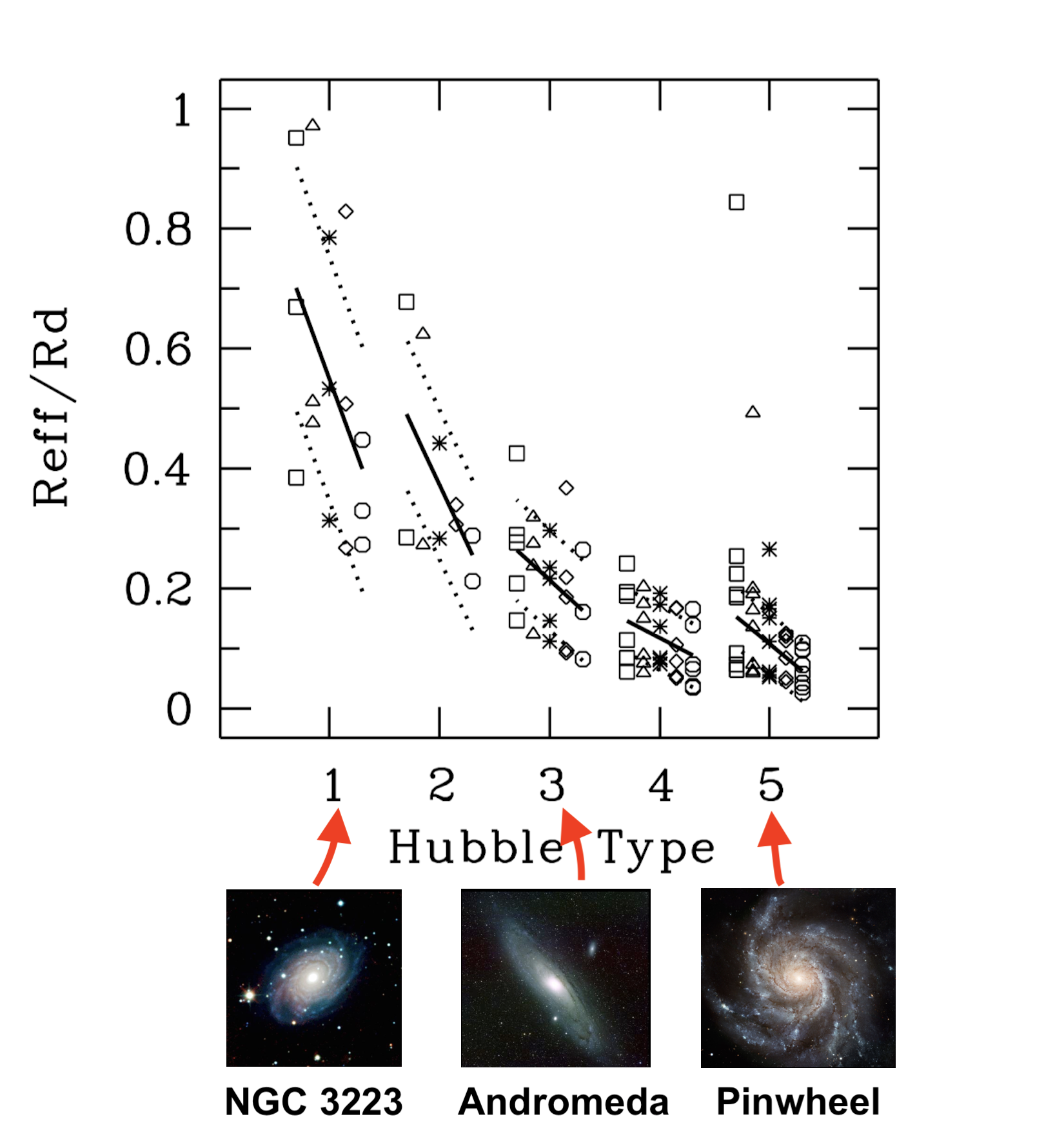 The different symbols correspond to different filters going from the I band (infrared) denoted by squares, to the U band (ultraviolet) denoted by circles; they have been offset slightly along the $x$ axis for visualization purposes — you see that the ratio decreases slightly for shorter wavelengths. In other words, the bulge is less prominent, the bluer the light you consider.

To answer the title question, what you want to know is the bulge-to-total ($B/T$) ratio, which is the fraction of a spiral galaxy's light (and thus, approximately, its stars) which in the bulge; this ranges from 1 (it's all bulge, nothing else there -- i.e., it's an elliptical galaxy) -- to 0 (no bulge at all).

Consistent with pela's answer about sizes, the answer depends on what type of spiral galaxy you're talking about; traditionally, part of the definitions of the Hubble sequence was how much extra light appeared to be in the central region of the galaxy, which is roughly the same as $B/T$.

These days, the answer is actually rather uncertain, because astronomers are in a debate about just what constitutes a "bulge": there are "classical bulges" (kind of like mini-elliptical galaxies and more or less what you are probably thinking about), "pseudobulges", "boxy/peanut-shaped bulges", and possibly other things, all of which are "extra light/stars" in the central region of the galaxy, but which have different shapes, dynamics, and origins. For example, the Milky Way definitely has a boxy/peanut-shaped bulge (what you see sticking up out of the disk), which is really part of its bar; it appears to have a "nuclear disk" (a.k.a. "disky pseudobulge"), which is a dense, bright disk of stars extending to 150 parsecs or so in radius; but it may not have a "classical bulge" at all.

To give you something to look at that has $B/T$ values, here's a figure from Laurikainen et al. (2010), which is based on moderately sophisticated analysis of near-infrared images (less confused by dust and recent star-formation than optical images). The small symbols are individual-galaxy measurements, the large filled circles are median values for each Hubble type, and the open circles are from an earlier study. This plot includes S0/lenticular galaxies (Hubble type < 0; these have disks, but no spiral arms) as well as actual spiral galaxies (Hubble types >= 0). Note that the $B/T$ axis is on a logarithmic scale. Early-type spirals (e.g., Sa galaxies) have $B/T \sim 0.3$; Sc and later spirals typically have $B/T < 0.1$. 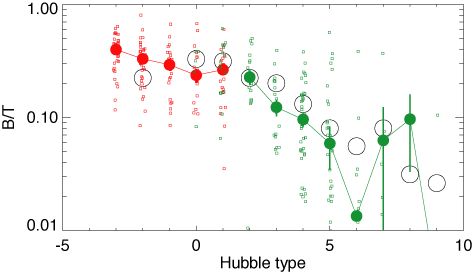 Not the answer you're looking for? Browse other questions tagged galaxy galaxy-center galactic-center or ask your own question.