Could the barycenter orbit of our sun be greatly underestimated?

The radius of the suns orbit around the barycenter of the solar system is often measured to be roughly the radius of the sun. Based on the same type of bias that has made humans miss things about their solar system because they are looking at it from the vantage point of Earth orbiting inside the system, is it possible that the suns orbit around the barycenter is actually much larger?

This is basically equivalent to asking whether there's an undetected massive object in the outer Solar System.

Starting from the basics, the location of the centre-of-mass of a system of point masses is given by

Note that the quantities in bold are vector quantities. Without loss of generality, we can use a reference frame where $\mathbf{X} = \mathbf{0}$, i.e. the origin of the coordinate system is the centre-of-mass. For a two-body system, this gives:

Where $r = r_{1} + r_{2}$ is the total separation between the two objects. This means that the trajectories of the two objects around the centre-of-mass are scaled mirror-images of each other. So the semimajor axis of the reflex orbit of the Sun $a_{1}$ for a planet of mass $m_{2}$ with orbital semimajor axis $a$ is given by:

This orbit is larger for more massive planets (higher $q$) and for wider planetary orbits (higher $a$). Working this out for the major planets, the largest reflex orbit is due to Jupiter (1.06 solar radii), followed by Saturn (0.59 solar radii), Neptune (0.33 solar radii) and Uranus (0.18 solar radii).

If Planet Nine exists with the predicted properties given by Batygin et al. (2019), a ~5–10 Earth mass planet in a ~400–800 AU orbit would give a reflex orbit of ~1 to ~5 solar radii, which would likely be the largest contribution to the Sun's orbit around the Solar System barycentre.

The hypothesis that the Sun may have a distant binary companion or a giant planet in the Oort cloud (which would both be more massive than the proposed Planet Nine, and much further out), which has variously been termed "Nemesis" or "Tyche" would result in an even larger orbit around the Solar System barycentre. So far, these hypotheses have not held up to observational evidence.

Our understanding of orbits is not based simply on astronomical observation, it's based on physics as well.

In ancient times, we didn't have a very complete understanding of the physics of the universe. Philosophers (as what passed for scientists were called then) had many preconceived notions (e.g. all motion in the universe was either straight or circular), and they tried to fit their observations with them. It didn't feel like the Earth was moving, but they could see stars and planets moving, so they assumed the earth was stationary; to explain the complicated movements of planets they came up with things like epicycles.

Since then we figured out the heliocentric organization of the solar system (no more epicycles needed), then later that the solar system is part of a galaxy, which is part of a much larger universe, and scientists like Galileo, Newton, and Einstein refined our understanding motion and gravity. Astronomical observations on varying scales confirmed that these understandings were substantially correct (although when they got to galactic scales they discovered anomalies, leading to the notion of dark matter -- if this sounds like epicycles all over, read What Astronomers Wish Everyone Knew About Dark Matter And Dark Energy).

In addition to this, our observational technology has advanced. So even though we're observing from a single vantage point, we're able to detect motion in multiple directions. For instance, the Doppler effect can be used to detect motion to or away from the Earth (this is one of the techniques used to detect exoplanets, and it should be far more accurate for the Sun because it's so much closer). So we can map the precise motion of the Sun, and compare this with the expected motion around the barycenter with the known planets. If there were a significant difference, we'd go looking for an explanation; there might be another planet we haven't discovered (Neptune and Pluto were both discovered by looking for the sources of disturbances in other orbits), or some as-yet-unknown physical effect (e.g. General Relativity explained the anomalous orbit of Mercury).

The barycentre of the whole solar system is inside the Sun roughly half the time, and outside the other half.

To calculate the actual motion of the Sun, only the motions of the four giant planets (Jupiter, Saturn, Uranus, Neptune) need to be considered. The contributions of all other planets, dwarf planets, etc. are negligible. If the four giant planets were on a straight line on the same side of the Sun, the combined center of mass would lie about 1.17 solar radii or just over 810,000 km above the Sun's surface. 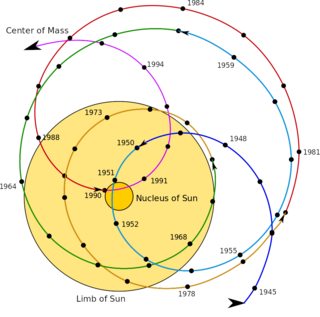 For the barycentre to be much further from the centre of the Sun than currently believed, there would have to be an undiscovered Uranus-to-Jupiter mass planet in the solar system close enough to the Sun to make a difference. This hypothetical body would have an effect on the rest of the solar system. This is how some of the outer planets were discovered: some orbits were being noticeably perturbed by something. The search for the something led to the discovery of another planet.

If it turns out that Planet Nine exists and is discovered and is a super-Earth with a mass around five to ten times that of the Earth (compared with 14.5 for Uranus and 17 for Neptune), it would be so far away that its effects on the barycentre would be negligible. The four giant planets are much closer, and much more massive, so have a much more noticeable effect.

10
Is it possible that the Sun has a binary partner (the Nemesis Theory) that has eluded detection?
9
3 years later, how strong is the evidence for planet 9?

3
Why are these objects moving at Vastly Different Speeds along the same orbit?
1
Do all orbiting objects have barycenters?
1
How to find the Orbital Period of two Binary Planets around a Single Star?
3
How feasible would it be to get to a planet orbiting directly opposite Earth?
1
what would the mass and density of Sirius A be if the mass of Sirius B is roughly the same as the Earth?
4
Moons with curlicue paths around our Sun?
5
Kepler's Law, focal points - Heliocentric or Barycentric?
5
How to calculate eclipses on a planet in a binary star system
4
What are typical peculiar velocities?
1
If a satelite is in orbit around a two body system what is it's shape?