Do planets orbit the sun in ellipses because of sun movement vector?

Actual diagrams, rather than made-up artists' impressions, can be found at NASA JPL. https://ssd.jpl.nasa.gov/?orbits

The ellipticity of planetary orbits are in general quite small and they are not aligned. http://www.met.rdg.ac.uk/~ross/Astronomy/Planets.html gives a table of orbital elements in the solar system. The longitudes of perihelion (labelled as "$\sim \omega$") are different - indicating that the "eccentricity vectors" (as you put it, and keep asking for) are pointing in essentially random directions around the ecliptic plane.

Many of the diagrams that you see are drawn from perspectives that are not looking straight down on the ecliptic plane. If that is the case then of course you see (highly) elliptical shapes (even when the orbits are nearly circular) that appear aligned. That is merely a perspective effect.

First of all, to make absolutely sure we're on the same page about the shape of the elliptical orbits, seeing as there's been some confusion in the comments, I've included the same two pictures from both top down and at an oblique angle. 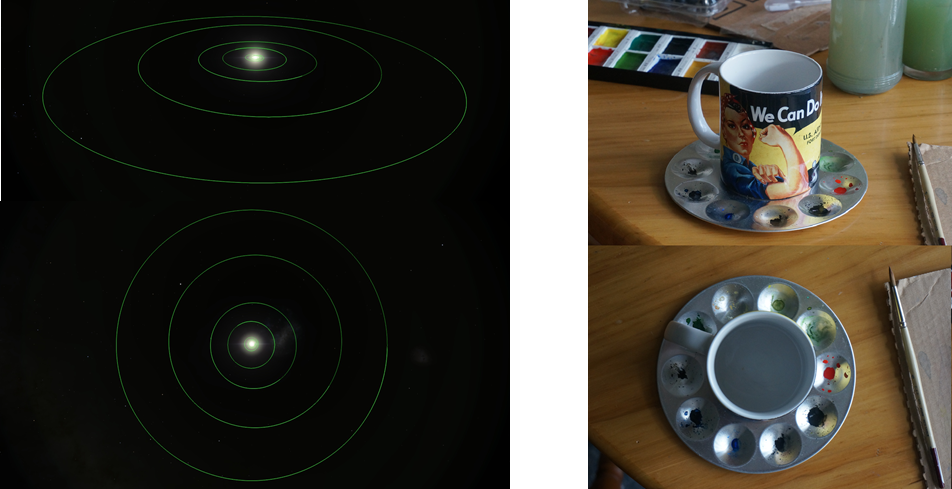 Which directions are the planets' orbital eccentricities pointing to?

You can find out the longitudinal direction by adding the longitude of the ascending node to the argument of perihelion. This information is all in wikipedia but I've gone and processed it anyway. 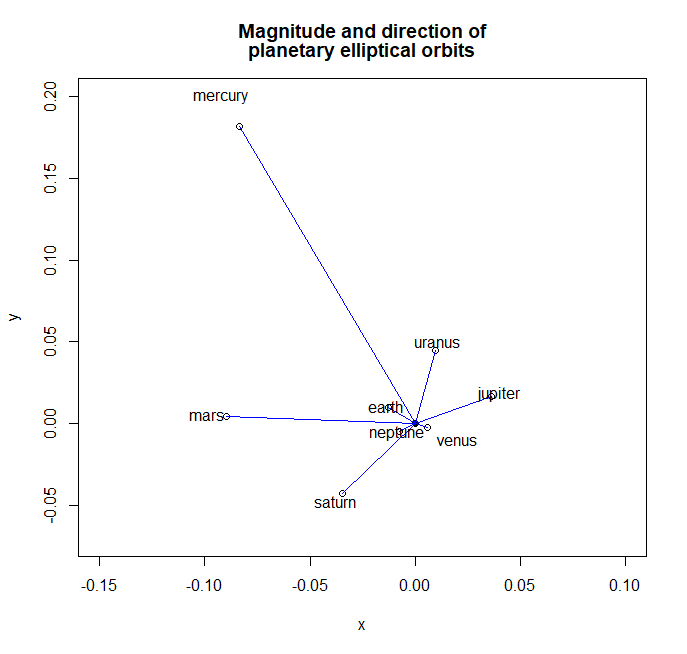 Mercury is a bit of an anomaly because its orbit precesses over time and so the direction of its major axis changes very slowly (it takes 12 million orbits for the major axis to do a full 360 degree sweep). The other planets have their major axes scattered fairly evenly, by my eye.

Which direction is the sun moving in?

This was answered here. The Sun is moving through the galaxy in a direction 60 degrees from the ecliptic, which is not aligned with the eccentricities of any planets.

It is a dynamic system with dependencies and influences through gravity. Objects can get captured, flung around, forced into resonances ...

The orbital plane ("ecliptic") is different for all objects. Differences may be small. The solar system's ecliptic is defined by earth's orbital plane mostly for [nautical reasons][1] . Other planets and objects have an inclinitation in relation to that plane.

16
In which direction is the sun travelling?

7
Effects of the solar tide on planets
12
Are the Trappist-1 planets in stable orbits?
4
Can one approximate the semi-major axis of an orbit as the average orbital distance for eccentric orbits?
5
Could the barycenter orbit of our sun be greatly underestimated?
3
What would happen if the earth's orbit were slightly perturbed?
23
Why is the Moon's orbit so complicated?
5
How small could an orbital system be in our solar system?
3
Why doesn't Triton orbit over Neptune's equator?