Is it possible to see stars that are gravitationally lensed by the sun from the ground?

Roughly 100 years ago, Eddington confirmed Einstein’s general relativity theory by photographing stars behind the obscured Sun during a total eclipse.

A coronograph is a device that mimics what happens during an eclipse and blocks the light that comes from a star so that nearby objects (which would otherwise be hidden by the star's glare) can be seen. This device was invented in 1931 by Lyot, 12 years after the aforementioned eclipse.

Would it be possible to use a coronograph with a ground-based telescope to reproduce the observation done by Eddington in 1919? Or would the light from the Sun scattered in the atmosphere be enough to hide the stars for which the gravitational lensing is visible?

The answer is no. But there's an interestign alternative.

The Eddington's experiment was not about seen a gravitationally lensed star but to see a small displacement of its position (just below 2 arcseconds) due to the solar gravitational field. Lensing involves considerably magnifying the source and that can only be done if the star is directly behind the Sun (or very close to that direction).

Only close to the Observer-Sun line the star would be considerably magnified and the flux increased. The result would be an Einstein ring, an hyperdistorted version of the image of the star built with the light-collecting area as large as the Sun (at least).

For this to happen you need to locate yourself at the solar gravitational focus. Theoretically this is not a single point, in fact it is an entire line extendign from the Sun outwards (we call it the gravitational focal line). The thing is that if you are too close to the Sun the Einstein ring is "located inside the solar disk". So you need to get very far away to be able to see the focused light. The point at which the Einstein ring grows larger than the apparent diameter of the Sun is located $550$ astronomical units away from the Sun. This is the minimal distance you would be able to exploit the gravitational lensing effect of the Sun. 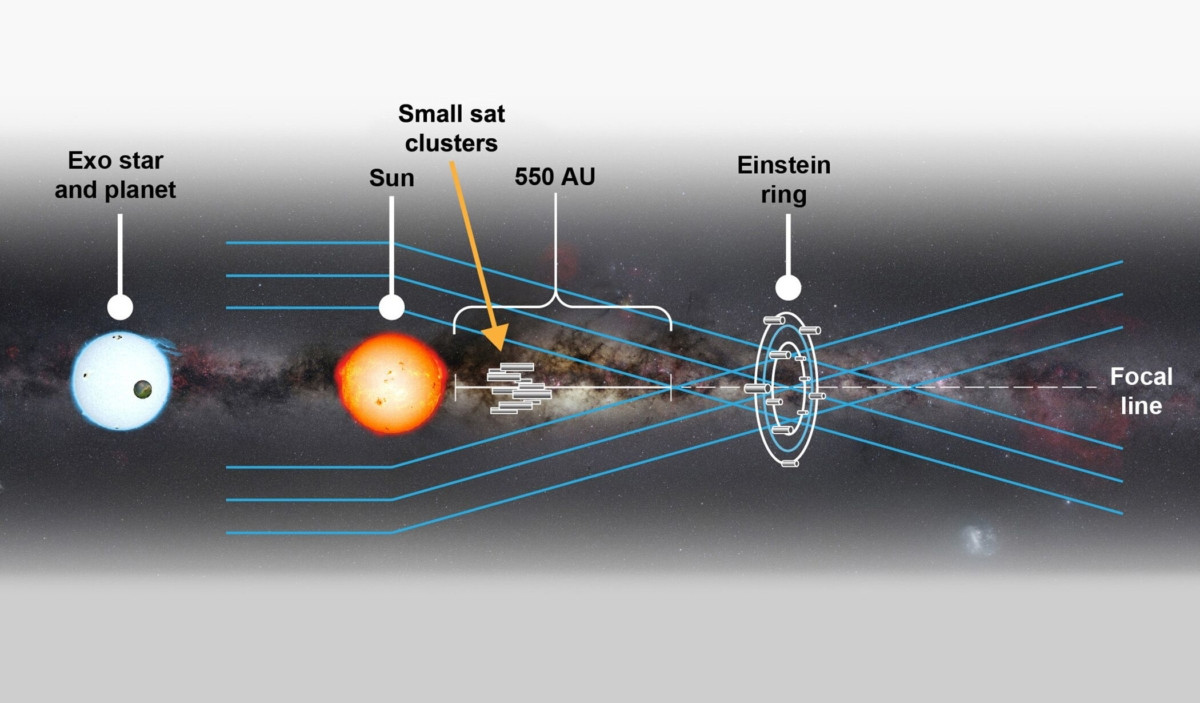 A distance of $550\; AU$ is insanely huge. The farthest probe we have sent, the Voyager 2, is currently located $147\; AU$ from Earth, so you would need almost 4 times that to reach the point where this could become feasible. Also you would probably prefer to position yourself a bit farther since the Einstein ring would still be located inside the Solar Corona and a lot of information could be washed out by the intense light (and in the case of a radio telescope you would see an opaque wall). There are a lot of important things that could be done at the focal line of the Sun, you would have a crazy huge magnification (just as if the object was as close to you as the Sun from that same distance! which equates to tenths of millions magnifications in many cases), and the flux would be equivalent to the one obtained by a $1.000.000 \; km$ lens or even more.

It has been said that exploring the solar focal line will be the most important milestone between the exploration of the outer Solar System and the firsts attempts to explore the closest stellar systems. The main problem is that you need to position yourself with incredible alignment accuracy to get the Einstein ring of an object behind the Sun. A probe like that would be usefull to observe just a single object during the entirety of the mission (maybe an exoplanet wich might be crucial for our understanding of habitability), since the delta-v needed to change position and get to another part of the Solar System $550 \; AU$ from the Sun would be insane and it would be more economically feasible to lunch a another probe to the next direction just to observe the other target. A good place to place a telescope like this would be an possible moon around the hypothetical Planet 9 (which is considered to reach $800\; AU$ at perihelion), the problem been again that you would only observe breifly objects that happen to fall at the opposite position relative to the Sun.

A mission to the focal line has been under study for years now. You can read about the details in a presentation that was given by one of the main proponets, astrophysicist Claudio Maccone. There's also a nice talk about the topic on Keck's YouTube channel.

10
With gravitational lensing, is it possible to mathematically compute the correct image of the galaxy that is being distorted?
1
Given that gravity bends the path of light, how confident can we be that galaxies are where they seem to be?
13
Are astronomers waiting to see something in an image from a gravitational lens that they've already seen in an adjacent image?
3
Is it plausible to use other stars for the proposed FOCAL mission instead of the Sun?
1
How are all the intermediate images between the "lensed" and "unlensed" endpoints of this video generated?