Jupiter has a minimum brightness that is brighter than stars. Is the reason an “airy disc”, concentric rings as a diffraction effect, is seen around stars and not Jupiter because Jupiter has an angular size that is thousands of times larger? With similar reasoning, if the field of view was scaled up a thousand fold, would the optical effects be similar to that around stars?

No. The size of the Airy disc, and rings, is defined for a point source and depends on the system magnification, and the system aperture. It does not depend on brightness other than depending on the low-level detectability limit of your sensor.

It is true that the diffraction pattern of an extended object is roughly the superposition of Airy disks from every (geometric) point in the object's image. There will be a 'halo' around the image of width (approximately) Airy disk radius, and then there will be secondary maxima generated by the (interfering) Airy rings from all the image points.

tl,dr: The Airy disc of a scope has a fixed size and a magnification or choice of fov (sensor) has its limits. Jupiter is too big for a decent amateur telescope to reach its resolution limits.

The Airy disc or diffraction limit is defined by wavelength of the incoming light and the diameter of the telescope's main mirror/frontal lense.

A telescope produces an image circle in the focal plane that is brightest on the optical axis and gets ever darker (and distorted and color aberrated) to the edges. The field of view is derived from the diameter of that image divided by the focal length of the scope (https://www.skyandtelescope.com/astronomy-blogs/imaging-foundations-richard-wright/understanding-field-of-view-pixel-scale/).

Depending on observation goal and what amount of distortion and attenuation one is willing to accept, one chooses a sensor size or an eyepiece focal length. Something can be done here with optical tricks like correctors or reducers, but in principle, you cannot amplify the fov beyond the image that the scope produces, which is usually in the range of arcminutes or a few degrees. You can be smaller than that (e.g. for observing planets), by choosing a small sensor, or a large magnification (relation of eyepiece focal length to scope focal length) or even optical converters to multiply the focal length, but the smaller you go, the more you loose of the scope's resolution power, and the higher the influence of the scope's optical errors get.

Remains to say: usually the atmosphere limits the observational experience, not the gear.

With these figures d=115mm, f=805mm, green light wavelength you could calculate the diameter of the Airy disc and compare it to the angular size of Jupiter or its moon Titan to see if they will be properly resolved.

Is the reason an “airy disc”, concentric rings as a diffraction effect, is seen around stars and not Jupiter because Jupiter has an angular size that is thousands of times larger?

Yes, for a wide range of apertures and wavelengths, from Earth, this is true.

The angle of the first minimum of the Airy disk is

where $\lambda$ is the observational wavelength and $d$ is the diameter of the aperture. Since it's wavelength dependent we actually see colors in the Airy disk fringes if we look hard enough!

Where is the dividing line?

So if you are looking at visible light with a wavelength of $5 \times 10^{-7}$ meters then the crossover is at about a 7 millimeter aperture.

That means that for a cellphone camera's lens, Jupiter is pretty much star-like. Whether its pixels are are able to discern the Airy disk is a separate question.

At 1 GHz the wavelength is about 0.3 meters, and that makes the "cross-over" aperture about 4 kilometers. A single dish, even the biggest one on Earth FAST (see also), if equipped with a focal plane array or used to scan across Jupiter (see also) would see its diffraction-limited Airy disk rather than Jupiter's disk. However, a large radiotelescope array tens of kilometers wide could see Jupiter's actual disk.

Does Jupiter have fringes?

If jupiter were a circular, optically flat mirror, we would propagate each photon from the Sun to illuminate the entire thing, then propagate that reflection back to every point in our telescope. If we did that exercise assuming a large aperture so that Jupiter was well resolved, we would see a knife-edge diffraction-like effect near the edge. The Wikipedia article for this is insufficient so I won't link to it, but hyperphysic's Diffraction by Opaque Barrier gives an idea what it looks like. 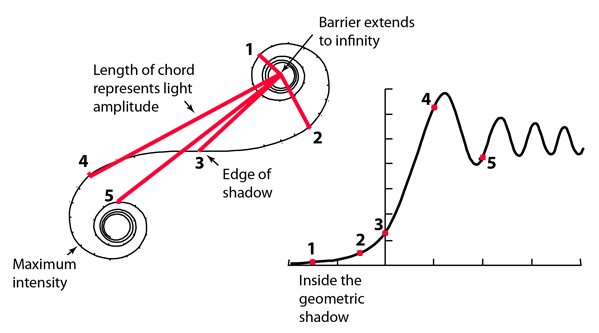 Surprisingly to us at first, the fringes are on the inside of the disk, and there's a smooth decay outside of the edge!

But that's for a hard edge, and Jupiter's edge is diffuse for both geometrical and atmospheric reasons, and of course it is not an optical flat.

So on a good clear night, it might be extremely interesting to use a long focal length camera that can be variably stopped down to very small apertures and scan through the transition region from diffraction limited to resolved and see what happens. (long focal length so that sensor pixelation will not be a limiting factor). I think you will see something close to Jupiter's intensity distribution folded with the intensity distribution of your aperture's Airy function as other answers elude to, but I'm not sure.

Not the answer you're looking for? Browse other questions tagged amateur-observing optics or ask your own question.

8
What is a radio "homology telescope" and is the 500m dish in China one?
2
How did single dish (or single receiver) radio telescopes originally generate images?
4
What is the highest granularity focal-plane array on a dish radio telescope? Or is this the ONLY ONE?
3
Which techniques are used to convert radio signals received by antenna to images?

2
Adaptive Optics?
2
Why is this HST WFPC2 image so much fuzzier than the WFC3 image of the same field?
4
What is a pupil slicer, and how does it work with anamorphic optics in VLT's ESPRESSO Echelle spectrograph?
2
What would "the next GAIA"-like instrument be like? Could it simply be a 3 to 5x scaled-up version of the same beautiful system?
1
Tracking deep sky objects
2
How does eyepiece exit pupil diameter affect image clarity and viewing experience?