As reported by Nature.com, Voyager 1 and 2 detected a 20-fold increase in plasma density going from the heliosphere out to interstellar space. Does that 20-fold difference in density imply a difference in refractive index, and if so, how much?

Here's the abstract of the (paywalled) paper:

The heliopause is the boundary between the hot heliospheric (solar wind) plasma and the relatively cold interstellar plasma. Pressure balance considerations show that there should be a large (factor of 20 to 50) density increase across the heliopause. Here we report electron density measurements from the Voyager 1 and 2 plasma wave instruments near and beyond the heliopause. The plasma density in the outer heliosphere is typically about 0.002 cm⁻³. The first electron density measured by the Voyager 2 plasma wave instrument in the interstellar medium, 0.039 cm⁻³ ± 15%, was on 30 January 2019 at a heliocentric radial distance of 119.7 au. The density jump, about a factor of 20, confirms that Voyager 2 crossed the heliopause. The new density is very similar to the first density measured in the interstellar medium by the Voyager 1 plasma wave instrument, 0.055 cm⁻³, on 23 October 2013 at a radial distance of 122.6 au. These small differences in the densities and radial distances are probably due to the relative locations of the spacecraft in the boundary layer that forms in the interstellar plasma just beyond the heliopause. 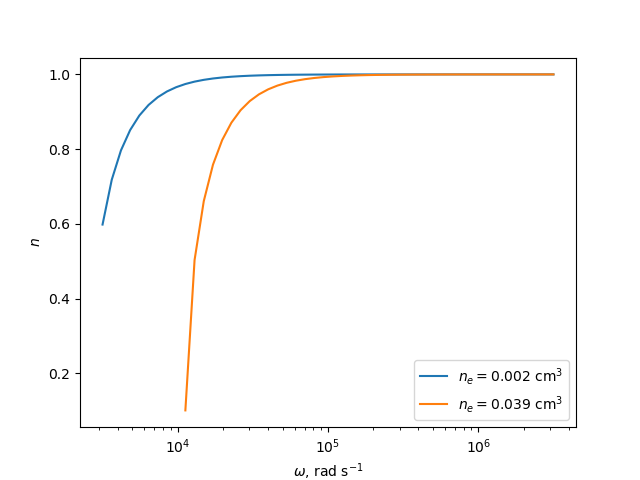 The area of the spectrum where there is a significant change appears to be beyond even the interest of most radio observations.

Not the answer you're looking for? Browse other questions tagged optics interstellar-medium plasma-physics or ask your own question.

1
What can be learned from low frequency radio astronomy available outside of Earth's ionosphere?