How are neutrinos produced in blazar jets?

I was watching the press release about measuring neutrinos and gamma rays from a distant blazar. One of the presenters mentioned that the neutrinos are associated with very high energy protons caught up in the jet produced by the galactic nucleus. What I don't understand is what interation(s) is producing the neutrinos in this scenario. What sort of particles must the protons be interacting with to produce these neutrinos?

Neutrinos are typically produced in AGN jets through what we refer to as hadronic processes. Protons are accelerated to relativistic speeds and interact with nearby photons. Depending on the particular type of AGN, there are a number of possible sources of these photons:

As I understand it, contributions from the latter two sources are less prominent in blazars, although they may play an important role in the radio-loud flat spectrum radio quasars (FSRQs). Murase et al. 2014 have an excellent diagram showing the possible sources of this radiation: 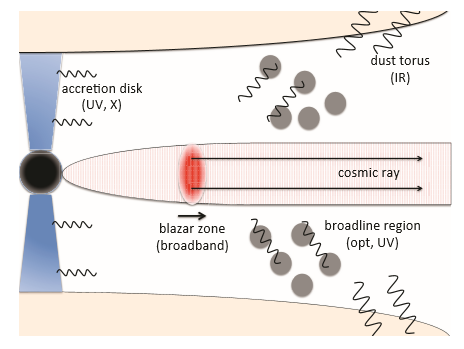 The photons interact with the protons in the jet and produce other hadrons, typically pions. Neutral pions decay to a pair of photons, one key mechanism of gamma ray production in AGN jets:1 $$\pi^0\to\gamma+\gamma$$ However, it is quite possible for the proton-photon interactions to produce charged pions ($\pi^{\pm}$), which then decay to muons and muon neutrinos (Atoyan & Dermer 2002). The muons decay to electrons, while the muon neutrinos may be observed here on Earth. This appears to have been the source of the neutrino detected by IceCube in 2018, originating from the blazar TXS 0506+056.

1 The other main set of gamma ray production pathways in the jets are the leptonic processes, where electrons and positrons transfer energy to ambient photons via the inverse Compton effect; see Degrange & Fontaine 2016, which I found quite helpful when learning about those mechanisms.

Not the answer you're looking for? Browse other questions tagged quasars neutrinos active-galaxy particles blazars or ask your own question.

2
Are neutrinos affected by gravity fields?
13
How Are Radioactive Decay Rates Influenced by Neutrinos - On Earth and Other Dense Planets
1
Why do we have so few neutrinos to study?
10
Is the earth bombarded equally in all directions by neutrinos?
8
Neutrinos passing through black holes
12
What object in the universe is most opaque to neutrinos?
4
Are quasars simply AGNs that are viewed from a particular angle?
0
Could neutrinos be at least a part of Dark Matter?
3
Do any particles in AGN jets escape the galaxy?