How to evaluate the fit of an isochrone to a stellar population?

Consider that I know the extinction, distance modulus, reddening, and metallicity for a particular star cluster.

I need to determine it's age from isochrone fitting.

Finding the best-fitting isochrone, a.k.a. isochrone fitting, is a standard approach to determine the age of globular clusters. This problem can be solved with a least-square method, where the data to be fitted are the points on the color-magnitude diagram and the fitting curve is the isochrone. Since there are many ways to apply this method, I will first outline the general approach and then I will provide you with a real case application.

Outline of the method

This $\chi^2$ could be the parameter you're looking for. Similar parameters can be obtained using the vertical distance or the minimum distance instead of the horizontal distance.

Let's see a real application of the $\chi^2$ minimization technique. I will use some plots that I've made for didactical purposes, obtained from the photometric data of 47 Tucanae in the HUGS catalogue (Piotto et al. 2015, Nardiello et al. 2018). I've used the HST ACS/WFC bands $F606W$ and $F814W$, which are similar to the $V$ of Johnson and $I$ of Cousins.

First point: usually we do not use all the sources at once, and there are several reasons for that. The main one is the dispersion on the CMD, which can lead to a bigger uncertainty on the final age measure. For example, your sources can have a huge dispersion on the CMD due to photometric errors, or they can have an intrinsic dispersion (e.g. due to differential reddening, binaries above the main sequence, multiple populations, and so on). You want to get rid of those outliers, you want to narrow the distribution of sources in the CMD to have a more robust determination. Second point: instead of using all the sources at once, we can bin them and average their position on the CMD. In this way, we have to deal just with a few fiducial points that represent the whole distribution.

So we bin the sources in magnitude, and for each bin we calculate the clipped mean of the colors. in finding the standard deviation of colors $\sigma$, discard all the sources outside e.g. $3\sigma$, eventually iterate this selection some times, and at the end calculating the mean color. In this way we get rid of the outliers and obtain the fiducial points. The results is shown in the image below: in black, the CMD of 47 Tuc; in grey, the final clipped selection, in red, the clipped mean color in bins of width $\Delta m_{F606w}=0.1$, i.e. the fiducial points. The error bars on the fiducial points are the standard deviations in both dimensions. 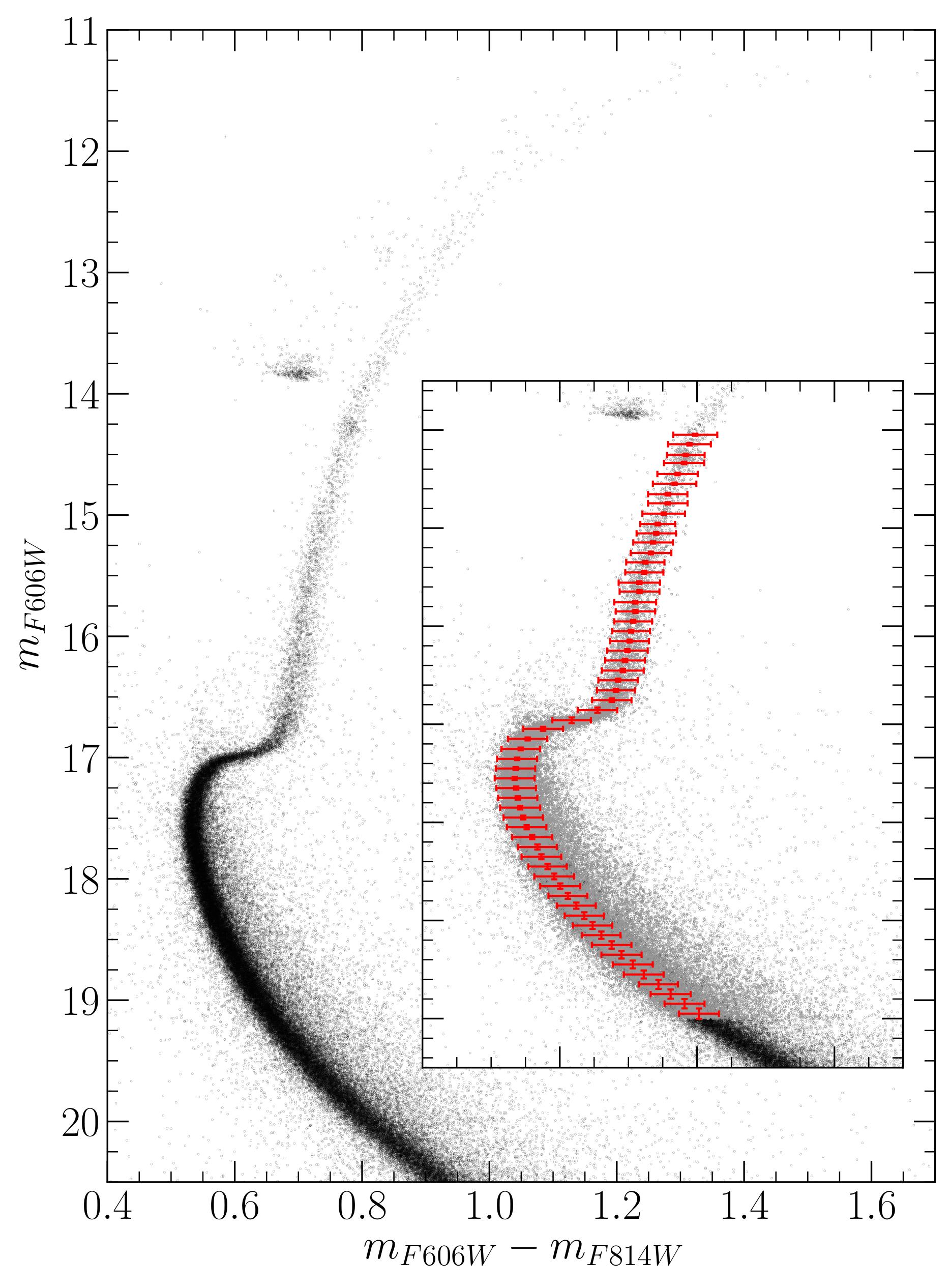 With these fiducial points, we can easily apply a least-square method. I've downloaded a set of isochrones from the Dartmouth Database, with fixed chemical abundances and different ages ($\Delta\textrm{age}=0.2$ Gyr). I've then calculated for each isochrone \begin{equation*} \chi^2=\sum_i(C_{i,\textrm{obs}}-C_{i,\textrm{exp}})^2 \end{equation*} where the sum is over all the fiducial points, $C_{i,\textrm{obs}}$ is the color of the $i$-th fiducial point, and $C_{i,\textrm{exp}}$ is the color of the isochrone at the magnitude of the $i$-th fiducial point. The results are in the image below. In the panel above, you can see the $\chi^2$ for each age. In the panel below, the red crosses are the fiducial points, while the colored points are the points extrapolated from each isochrone at the magnitude of every fiducial point (colors in the two panels are matched). Now you see that, for a given isochrone, in the $\chi^2$ we are summing the horizontal distances between the colored points and the red crosses. 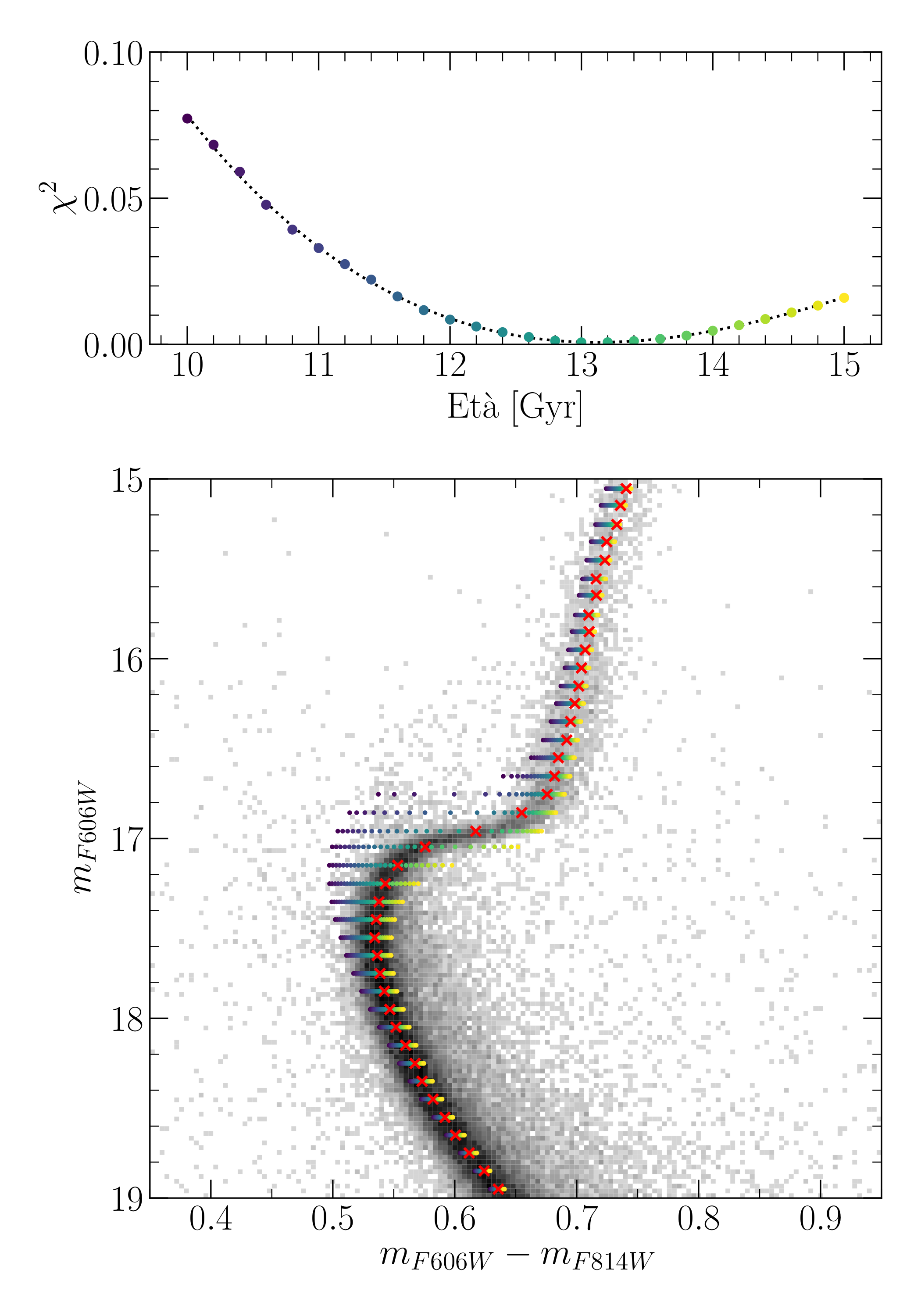 It depends on the method you are using. Assuming you're using a least-square method, the parameter you're looking for is the sum of the squared residuals (e.g. my $\chi^2$).

From the context of the question, I suppose you're asking if there's something beyond linear regression, i.e. something beyond finding the best-fitting line. If so: yes, as you can see from this wikipedia page. In fact, least-square methods are not limited to lines, neither linear functions, and the method I've outlined is an example.

It is well known that the determination of the absolute age of globular clusters carries considerable uncertainties (e.g. Bolte & Hogan (1995)). Therefore, to do meaningful science is necessary to analyze the error budget (e.g. how the uncertainties in distance, metallicity, and reddening propagate to the final uncertainty, or what is the entity of the photometric errors) and to take actions to mitigate these uncertainties (e.g. rejecting sources with high errors, using clipped averages, transposing theoretical isochrones into observational CMD and not observational data into theoretical CMD to control error propagation).

Not the answer you're looking for? Browse other questions tagged photometry age metallicity extinction or ask your own question.

4
How is the Lithium Depletion Boundary used to determine the age of a stellar cluster?
3
How to obtain distance modulus and Total extinction from Isochrone fitting to CMD?
6
Have any planetary systems been found around Population II stars?
1
Stellar age determination - code
2
Converting Light curve to Luminosity
2
How can a very old star be formed among Population III stars?