The Interplanetary Scintillation Array is the radioastronomy observatory (i.e. big antenna) where the first pulsar was discovered by then graduate student Jocelyn Bell Burnell through careful and painstaking review of chart recorder data.

For observing ionizing radiation such as cosmic rays and photons, a scintillator is used to convert energy to lower energy photons (usually visible light) but I don't know if the term scintillation in radio astronomy is related to that process in any way or not.

update: I've just asked in Aviation SE: What is “scintillation” and are “qualified pilots” aware of it? which was quickly answered and points out that in that context scintillation can also be called "twinkling". If a radio source can twinkle as well, is this an atmospheric effect? If so is it neutrals or ions that generate it. If not, is it turbulence in the ionized interstellar medium?

The imaging of an astronomical source is affected by a collection of effects that goes under the name of astronomical seeing, the main ones being smearing, motion and scintillation of the image. All these effects are caused by the deformation of the light wavefront due to random inhomogeneities in the refractive index of the atmosphere.

Let's visualize the basic idea behind the seeing. Suppose to have a light source located at infinite distance, such that it's ideally a point source and its light reaches Earth in plane waves. When entering the atmosphere these waves face changes in the refractive index, and in geometrical optics approximation the wavefronts are deformed according to Snell's law. In the following image you have two simplified cases: on the left, it is shown that a vertical gradient in the refractive index produces a simple tilt of the wavefront; on the right, it is shown that a horizontal gradient produces a deformation of the wavefront. Here $\textrm{WF}_1$ is the incoming unperturbed wavefront, $\textrm{WF}_2$ is the same wavefront after entering the atmosphere and $n_i$ are the refractive indices.

Let's now approach the real case. It is known that variations in the refractive index are related to variations in density (e.g. via Gladstone-Dale relation). Since our atmosphere has an overall more-or-less stationary distribution of temperatures, densities, and pressures, the most dramatic variations of the refractive index are found only in the turbulent layers. Here each turbulent eddy can have different density, temperature and so on, causing local variations in the refractive index. These layers are located in the first km of atmosphere (the planetary boundary layer) and at $\sim$10 km (near the tropopause). In the following image, it's depicted how a plane wavefront is deformed after crossing a turbulent layer and all of its eddies with different $n_i$. The lenght $r_0$ is the Fried parameter, which can be interpreted as the characteristic lenght of the turbulent eddies. 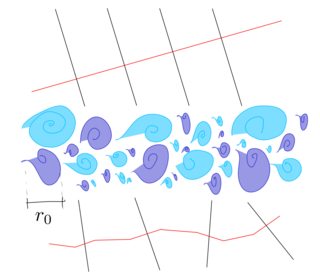 What is atmospheric scintillation then? Well, as you see from the previous image, the curvature of the wavefront leads to a convergence (or a divergence) of the light rays (i.e. the lines perpendicular to the wavefront). This means that when you take an image by collecting photons with your sensor (i.e. when you collect a portion of the wavefront) the image brightness can rise or decrease depending on whether light rays are converging or diverging. Furthermore, this brightness variation is time-dependent, since the eddies evolve with time and the turbulent layer has an horizontal drift velocity. This is scintillation.

To see scintillation you need that (i) the source has small angular dimension, (ii) the turbulent layer is far from the telescope, (iii) the characteristic length of the collected wavefront's portion (e.g. the diameter of the telescope) is comparable to $r_0$, (iv) the exposure time is less than the lifetime of the deformation. If (i) and (ii) are not satisfied you might see the motion of the source instead of scintillation, while if (iii) and (iv) are not satisfied you will see speckles or a smeared image.

Scintillation in the radio domain

For wavelengths between millimeters and centimeters we still have atmospheric effects, mainly due to the water vapor vertical gradient near the ground. Indeed, for this wavelengths the refractive index of air deviates from unity less than few houndreds of ppm. Since the turbulent layers are closer to the ground and usually the radiotelescope apertures are bigger than the characteristic length of the turbulence, seeing is not dominated by scintillation.

For wavelengths beyonds centimeters, the frequency of the waves gets closer to the plasma frequency in the ionosphere, hence the wavefront deformation provoked by the passage through the electron clouds in the ionosphere becomes relevant. Since their great distance from the ground, this will result in scintillation.

The timescale of ionospheric scintillation is between minutes and tens of minutes, but Hewish (1955) started to notice that there was another scintillation with a timescale of few seconds, and that its intensity was greater for sources near the Sun. Following this hint Hewish et al. (1964) have shown that in fact this faster scintillation was produced by plasma clouds in the interplanetary medium, delivered by the solar wind.

Going further, Sieber (1982) have shown that there's also a scintillation with timescales between days and months due to plasma clouds in the interstellar medium.

What exactly is interplanetary scintillation?

Scintillation is a time-depending change in the intensity of a light signal, and it is caused by deformations in the wavefront due to random variations of the refractive index. In the case of interplanetary scintillation, the refractive index variations are caused by plasma clouds traveling in the interplanetary medium and delivered by the solar wind.

What was the Interplanetary Scintillation Array looking for?

Did it successfully observe any?

Not the answer you're looking for? Browse other questions tagged radio-astronomy history .

6
How did Jocelyn Bell Burnell discover the periodicity of CP 1919?
3
Current topics on Radio Astronomy and looking for advice
1
Why did it take five years to "figure out" how to use astrometric calibration sources to deblur LOFAR images?

5
What were the challenges for the ancients to observe the orbit of the Moon (instead of Mars)?
5
What types of signals is SETI (and other such efforts) looking for?
1
Did Earth "tilt" seasonally before it was accepted that the world was not flat?
11
What else could the Event Horizon Telescope Observe?
1
Why did it take five years to "figure out" how to use astrometric calibration sources to deblur LOFAR images?
6
How did Jocelyn Bell Burnell discover the periodicity of CP 1919?
7
When was H-alpha first used to observe the universe?
1
Confusion around units for SEDs, and how to tell what I'm looking at
3
What exactly did ALMA observe at 20 AU from the "Mega Comet Arriving From the Oort Cloud" that will pass in 2031?