What is a thermal distribution of eccentricities?

The abstract of the new (open access) paper in Nature A statistical solution to the chaotic, non-hierarchical three-body problem says:

The three-body problem is arguably the oldest open question in astrophysics and has resisted a general analytic solution for centuries. Various implementations of perturbation theory provide solutions in portions of parameter space, but only where hierarchies of masses or separations exist. Numerical integrations show that bound, non-hierarchical triple systems of Newtonian point particles will almost always disintegrate into a single escaping star and a stable bound binary, but the chaotic nature of the three-body problem5 prevents the derivation of tractable6 analytic formulae that deterministically map initial conditions to final outcomes. Chaos, however, also motivates the assumption of ergodicity, implying that the distribution of outcomes is uniform across the accessible phase volume. Here we report a statistical solution to the non-hierarchical three-body problem that is derived using the ergodic hypothesis and that provides closed-form distributions of outcomes (for example, binary orbital elements) when given the conserved integrals of motion. We compare our outcome distributions to large ensembles of numerical three-body integrations and find good agreement, so long as we restrict ourselves to ‘resonant’ encounters (the roughly 50 per cent of scatterings that undergo chaotic evolution). In analysing our scattering experiments, we identify ‘scrambles’ (periods of time in which no pairwise binaries exist) as the key dynamical state that ergodicizes a non-hierarchical triple system. The generally super-thermal distributions of survivor binary eccentricity that we predict have notable applications to many astrophysical scenarios. For example, non-hierarchical triple systems produced dynamically in globular clusters are a primary formation channel for black-hole mergers, but the rates and properties of the resulting gravitational waves depend on the distribution of post-disintegration eccentricities.

If I understand correctly, the paper looks at scattering events where an incident third body interacts with an existing pair and after some interaction leaves with one member, the other being ejected. The eccentricity distribution is that of the surviving pair.

The results have important implications in astrophysics; so this question just focuses on one aspect. 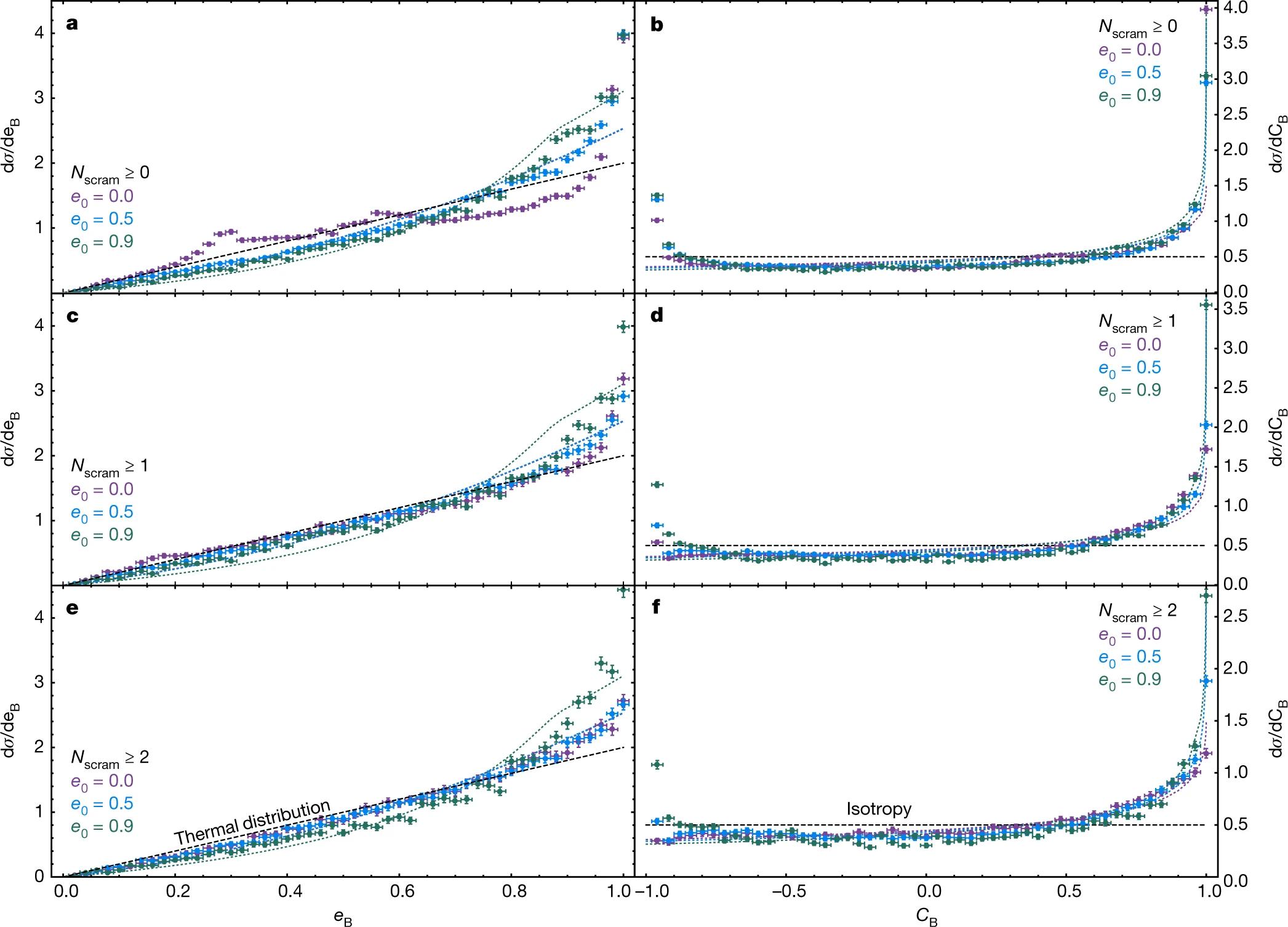 a, c, e, dσ/deB against eccentricity eB. b, d, f, dσ/dCB against the cosine of the binary inclination, CB. Line styles represent ergodic outcome distributions with the same ensemble angular momenta as in Fig. 3. The data points are binned outcomes from the same numerical scattering ensembles as in Fig. 3, with each row corresponding to the same cuts on Nscram. The eccentricity outcome distributions are notably super-thermal (the thermal distribution, dσ/deB = 2e, is shown as a black dashed line). The inclination distributions exhibit anisotropic bias towards prograde binaries aligned with L0 (the isotropic distribution is shown with a black dashed line). Horizontal error bars show bin sizes and vertical error bars indicate 95% Poissonian confidence intervals.

See this blog post for a nice derivation of this beautiful result, which is independent of the "temperature".

The derivation relies on a small 'swindle' by assuming a population of only binaries and not any single or trinary systems; it also has divergent energy since it allows too many arbitrarily tight or loose binaries - it can only be an approximation to real systems.

Not the answer you're looking for? Browse other questions tagged black-hole gravitational-waves mathematics n-body-simulations thermodynamics or ask your own question.

5
What are the biggest problems about the numerical, finite-element GR models?
0
Do black holes produce thermal radiation?
6
Generate an uniform distribution on the sky
11
What would it feel like to be orbiting near a merging black hole?
2
A rough analytical expression for the Milky Way's radial mass distribution?
19
Are the stars distributed in uniform distribution, on the celestial dome, with respect to brightness?
2
What kind of triangle is formed by three unequal masses in a circular restricted three body orbit?