tl;dr - Is splitting up the process of interferometry as shown in the diagram possible, and if so, is it more efficient and/or easier than traditional methods?

I have been doing some research into radio interferometry, and I had a question about it - I know that we can combine the signals from multiple telescopes into one "image" using interferometry, but what if I was able to do that multiple times?

Let me describe this a bit better. Say I have nine dishes. I arrange three of them in an equilateral triangle, and then I do the same with the other 6, and then, I arrange those three groups of three into a larger equilateral triangle. Then, I combine the signals from each three of the telescopes, and then I combine the three resulting signals. Here's a diagram that might help - the blue dishes are the "telescopes", and the red and green boxes are the "processors" or where the signals would be interfered.

In principle, would this work? And, in the context of radio astronomy, would it be easier to combine or interfere only three signals rather than nine?

Absolutely this can work as can be seen in The Murchison Widefield Array or MWA in Western Australia. This is essentially exactly how it works. You definitely do loose information (the first stage of combining antennas significantly reduces the field of view, and the number of interferometric baselines you get is reduced).

One of the tiles making up the 32T, a prototype instrument for the Murchison Widefield Array (source)

An MWA antenna consists of a four by four regular grid of dual-polarisation dipole elements arranged on a 4m x 4m steel mesh ground plane. Each antenna (with its 16 dipoles) is known as a "tile". Signals from each dipole pass through a low noise amplifier (LNA) and are combined in an analogue beamformer to produce tile beams on the sky. Beamformers sit next to the tiles in the field. The radio frequency (RF) signals from the tile-beams are transmitted to a receiver, each receiver being able to process the signals from a group of eight tiles. Receivers therefore sit in the field, close to groups of eight tiles; cables between receivers and beamformers carry data, power and control signals. Power for the receivers is provided from a central generator. 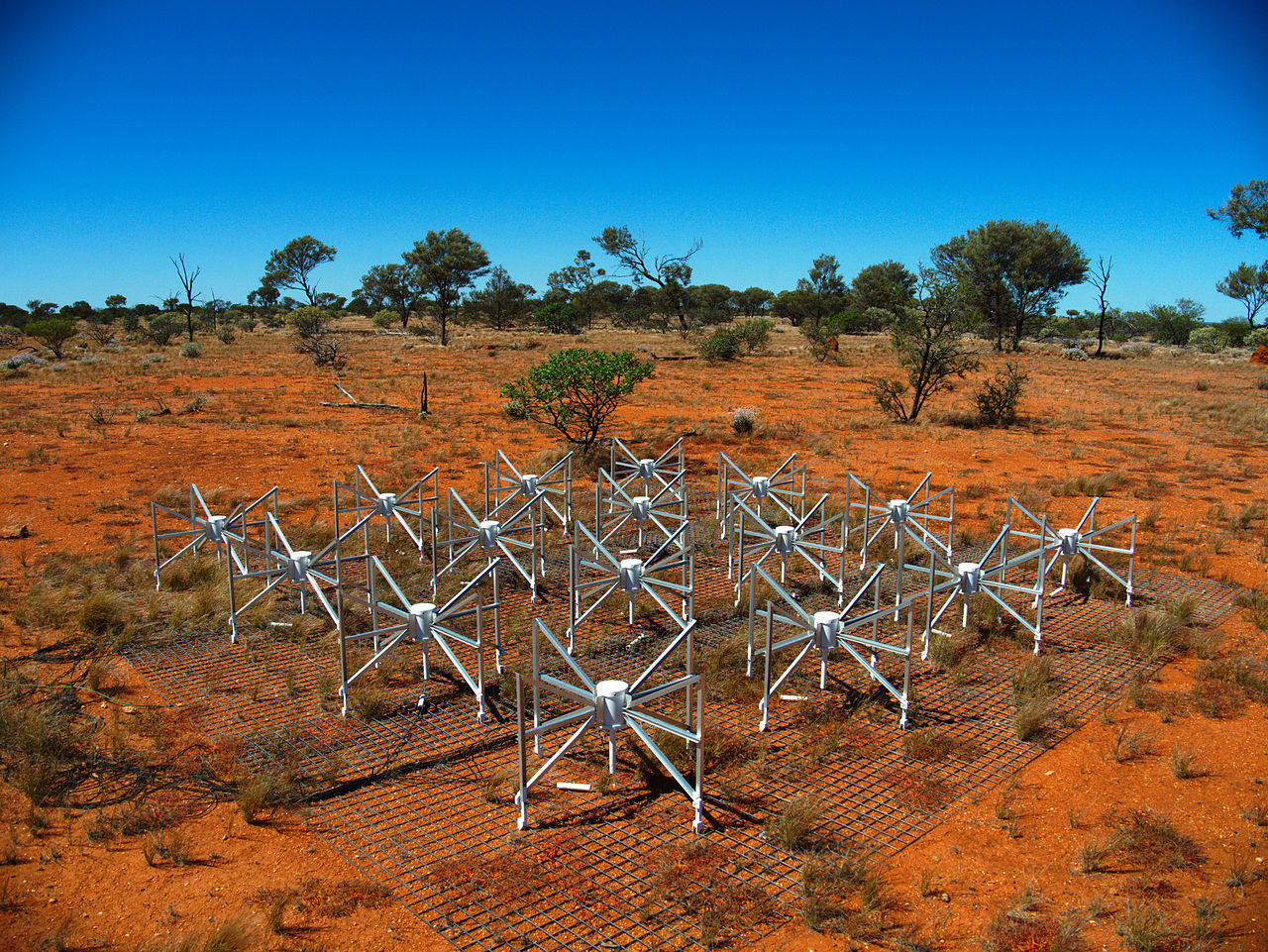 update: See @Chris' cool answer about MWA for something thad does work!

In principle, would this work?

I can't say "no in principle it could never work" but the combination in the layers loses information than it would almost certainly decrease image quality somewhat.

Is it more efficient and/or easier than traditional methods?

In an imaging optical telescope (or any imaging system including eyes) every pixel is illuminated simultaneously and directly by all areas of the aperture. From a given point in the distance a telescope will (try to) preserve the phase of all paths reaching the pixel so that the resulting intensity corresponds to the incoming power. This allows the system to obtain the best resolution.

Once you perform the interference and measure the resulting intensity, you lose the phase information forever (in conventional systems).

In the same way, in a radio telescope array usually all signals from all elements are combined together in a device called a "correlator" which in modern radio astronomy is a digital computer. Each pixel in the final image is calculated from correlations of every possible pair of elements in the array.

To make images from millimetric wavelengths joined by multiple antennas, we need an absolutely colossal amount of computer power. Signals from each antenna pair – there are 1225 possible pairs alone in the main array of antennas (50)- should be mathematically compared billions of times per second. You would need millions of laptop computers to perform the number of operations that ALMA carries out every second! This need resulted in the construction of one of the fastest supercomputers in the world, the ALMA Correlator.

The Correlator, installed in the AOS Technical Building at an altitude of 5,000 meters above sea level, is the last component in the cosmic wavelength collection process. It is a very large data processing system, composed of four quadrants, each of which can process data from up to 504 antenna pairs. The complete Correlator has 2,912 printed circuits, 5,200 interface wires and over 20 million welding points. The Correlator is made up of Tunable Filter Bank (TFB) cards. The distribution requires four TFBs for data that arrives from a single antenna. These cards have been developed and optimized by the Bordeaux University in France.

Again, once you perform correlation, you lose the phase information.

If you did that in each branch of your diagram, you would never be able to do the subsequent correlations properly because you'd lose phase information along the way, and could therefore no longer perform correlation of every possible pair.

There may still be some lossy algorithms that allow you to do some reduced amount of imaging the way that you propose, but the point of building such a large and expensive array would be to get the maximum amount of information.

So in reality the signal from each element is heterodyned with a local oscillator (How does ALMA produce stable, mutually coherent ~THz local oscillators for all of their dishes?) to a baseband of a few GHz, digitized (Why are the ALMA receivers' ADCs only 3-bits?) and then sent along a digital fiber optic cable to the main correlator computer building, with the original phase information from each dish still intact (albeit in digital form).

Important Caveat: However, in your diagram you could imagine that each of the green elements in the top layer is a "patch" of reflector on one dish, and the combination boxes in red (middle layer) is the collecting feed horn of one dish. So phase information from within the aperture of a single dish is indeed lost forever.

In that sense yes, it does work, and the resolution of an array is limited by the distances that separate the centers of each of the dishes, and not by the size of the dishes.

To help think more about that, see How do ASKAP's focal plane phased array feeds interact with the entire array phasing?

Not the answer you're looking for? Browse other questions tagged radio-astronomy interferometry or ask your own question.

8
Could mirrors be replaced with CCDs?
8
Why are the ALMA receivers' ADCs only 3-bits?
4
Difference between J2000, FK5 and ICRS coordinate systems? Which one does the Yale Bright Star Catalog use?
6
How does ALMA produce stable, mutually coherent ~THz local oscillators for all of their dishes?
3
Do ASKAP and ALMA have "fast dump" interferometric modes? Can they see and perhaps report Fast Radio Bursts in real time?
1
Why do radio telescopes, but not shorter wavelengths, have this Big Data problem?
1
How do ASKAP's focal plane phased array feeds interact with the entire array phasing?
1
Reference request (explaining) how optical correlators combine light from multiple telescopes to produce ultra-high resolution interferometric images?

4
What is the highest granularity focal-plane array on a dish radio telescope? Or is this the ONLY ONE?
2
Is radar interferometry used, or feasible, for ground based astronomy?
1
How do ASKAP's focal plane phased array feeds interact with the entire array phasing?
16
Is Optical VLBI theoretically feasible? If not why not?
6
Highest frequency that's been imaged by a radio telescope?
2
Has optical interferometry been done at radio frequency using heterodyning with a laser in a nonlinear material?
4
What is the significance of using baseline pairs in radio interferometry?