Why do the upper-atmosphere clouds of Venus appear to have that V shape?

IF I understand correctly, the atmosphere moves in the same direction as the rotational spin, but about 60 times faster. It is driven from the hot side of Venus to the cold side (the difference being great due to the planet's slow rotation allowing time for it to heat up and cool down). Is my understanding correct?

But why does the visible flow in the cloud tops describe a sideways V shape, with the flow appearing to move diagonally from the equator toward the poles? Is that also because the equator is hotter than the poles, driving the flow in that hotter-to-colder direction?

This is supplementary to antispinward's excellent answer and provides additional sources and a visualization from the JAXA spacecraft Atasuki. It has been shamelessly borrowed from Would it be possible to "ride the wave" on Venus?

The recently published paper in Nature Geoscience Atmospheric mountain wave generation on Venus and its influence on the solid planet’s rotation rate has open-access links in Science News, Motherboard, and Science.

I haven't found a preprint in arXiv yet.

There is a stationary gravity wave in Venus's very dense atmosphere. It is intermittent, but has been detected several times. See the NYTimes article Venus Smiled, With a Mysterious Wave Across Its Atmosphere for a discussion of recent observations by JAXA. See Akatsuki and Happy Birthday, Akatsuki!, celebrating it's first Venusian year at Venus.

above: "A sequence of images showing the stationary nature of the bow-shape wave above Venus when it was observed in December 2015. Planet-C" from NYTimes. credit: Planet-C/JAXA 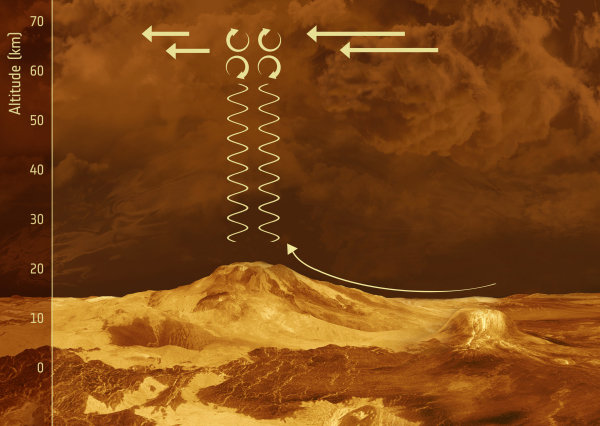 above: "An illustration of how gravity waves travel up mountains and into Venus’s atmosphere. Credit ESA" From How Mountains Obscured by Venus’s Clouds Reveal Themselves.

This shape is usually known as the "Y feature" and it appears in the ultraviolet (most images of the Venusian atmosphere incorporate information from the ultraviolet because that provides the most detail).

Peralta et al. (2015), "Venus's major cloud feature as an equatorially trapped wave distorted by the wind" describes the formation of the Y feature in terms of an atmospheric wave. They compare the atmospheric wave on Venus to Kelvin waves on Earth:

Even though the equatorial wave hereby deduced keeps similarities with the terrestrial Kelvin waves (it propagates along the west‐east direction and is equatorially trapped, its wave amplitude is maximum at the equator and decreases away from it), it also presents distinct properties that arise from the absence of the Coriolis factor on Venus and clearly set its different nature.

In particular, the mechanism trapping the wave near the equator is different: for Kelvin waves on Earth the Coriolis force is responsible, but on a slowly-rotating planet like Venus this is not sufficient.

While on the Earth, what traps atmospheric waves along the equator is the meridional variation of the Coriolis parameter $f \approx \beta \cdot y$ (with $f = 2\Omega \cdot \sin \phi$, $\beta = df/dy$, with $\Omega$ being Earth's angular rotation velocity and $y$ the meridional coordinate) [Sánchez‐Lavega, 2011], we find that on Venus this role is played by the centrifugal force through a centrifugal frequency [Peralta et al., 2014a, 2014b] $\Psi = (u_0 \cdot \tan \phi)/a$ (where $\phi$ is the latitude, $u_0$ is Venus background zonal wind, and $a$ is the planetary radius of Venus).

The next question is why the feature appears in the ultraviolet. They suggest this is due to an ultraviolet absorber being drawn upwards from an undetermined depth in the atmosphere.

This evident correlation supports previous works' interpretation of dark features as the result of upwelling of the ultraviolet absorber by vertical wind perturbations over a half cycle of the wave, while bright features are the result of downwelling of absorber‐depleted air over the other half cycle [Belton et al., 1976; del Genio and Rossow, 1990; Kouyama et al., 2012].

They go on to suggest that similar waves may exist on other slowly-rotating bodies like Titan, I'm not sure whether this has yet been determined.

Not the answer you're looking for? Browse other questions tagged venus planetary-atmosphere .