How can a singularity actually exist?

Probably a stupid question, but it "bothers" me and I can't find a concrete answer on the internets.

When you fall into a black hole, afaik, time slows down for the matter falling in as it gets blasted by high energy light incoming as the universe speeds up, relative to that matter.

Doesn't that mean though that the matter falling in never completely reaches the center?

It seems that the "core" of the black hole would be made of whatever was there at the time of the collapse with time not really flowing for it, and incoming matter would slow down as it fall and be in a almost suspended state as it gets closer to center through the event horizon.

But again, all my knowledge here is based on random YouTube, so I'd love to learn more about it if there are any resources touching that aspect...

The answer is, of course, that a singularity can't exist. The fact that General Relativity predicts that singularities are inevitable under certain conditions is proof that GR is wrong. A singularity is an infinity and a place where the equations of GR literally break down and become meaningless. (Infinities are decidedly unphysical!) When (if!) a more complete theory of space, time and gravity is developed, the new theory will probably show finite results where GR shows a singularity forming. (I say probably because whatever more complete theory of gravity we develop next is not guaranteed to be the final, completely correct theory -- it may just be an improvement which solves some issues with GR, but not all.)

There is good reason to think that the successor to GR will reproduce nearly all of GR's predictions -- GR is, after all, a very well verified theory. No prediction of GR that we have been able to test has been less than 100% right, and any new theory of gravity will have to match GR in those realms while showing differences in places (like the center of Black Holes) where gravity is very, very, very..., very strong.

Now the existence and properties of a BH's event horizon is a (no pun intended) gray area. Unlike near the singularity at the center of a GR black hole, there is no obvious signal in the mathematics of GR that it fails there. Nor have we made any measurements of the properties of an EH to test against GR's predictions. So our confidence in those predictions is due to the believed-high quality of the theory rather than due to test successfully passed.

Having said all that, there's a second answer to your question, that the question itself is ill-formed. As @mmeent says in a comment to another answer, you are assuming a flat space-time and stationary observers, needed in order that simultaneity between those distant observers and observers near the BH be meaningful: It is meaningful to talk about what any observer sees, but not meaningful to speak about what a distant observer and an observer near the event horizon see at the same time.

There is no inconsistency with observers at infinity seeing things slow down asymptotically as they approach the EH so as to never quite reach it, and observers falling into the same BH passing the EH in a finite time (and noticing nothing special about space at the EH). The whole point of the distant observer seeing nothing ever quite reach the EH is a consequence of there being no timelike or null curves (light follows null curves and matter always follows timelike curves) which reach out of the BH to outside observers. You can't get here from there.

It's also worth remembering that nearly every statement you have ever read about BHs is about equilibrium BHs. But a BH where the mass is falling in asymmetrically isn't going to be at equilibrium. Fortunately, GR is a dynamic theory and GR's BHs can be dynamic objects, though they settle down to equilibrium very, very quickly. We have observed this process using LIGO (the ringdown of two merging BHs is almost the poster child for "Not At Equilibrium") and the observations appear to be consistant with the predictions of GR. (This is a hot area of research, so new, surprising, results are very possible.)

I'd also note that if you fall into BH, the incoming blue-shifted light won't fry you because you, yourself will be falling along with the light. What an observer at infinity sees as a huge flux of high-energy radiation as it falls close to the EH, you, falling with it, will see as ordinary starlight. (If you could somehow stand still, you'd see the blue-shifting, though.) If you like, you can think of your high-speed fall red-shifting that blue-shifted light back to normal.

As you say (although you phrase it slightly wrong), time slows down closer to the horizon, as seen from a distant observer. That means that, in the reference frame of a distant observer, matter never crosses the event horizon, but instead "piles up" at the horizon, creating a thin shell of matter. In the reference frame of the falling matter, however, it does reach the center.

But the gravitational attraction outside a spherical mass is the same as if all the mass were concentrated in a point in the center (Newton's shell theorem, or more appropriately Birkhoff's theorem). That means there is no way to distinguish between "matter piled up in a shell" and "matter concentrated in a central point".

Disclaimer: The following is how I remember the argumentation from a GR course (with Igor Novikov) many years ago, but it's too long ago for me to derive it myself:

Since in general, accretion of matter is not isotropic, you might expect that you would be able to distinguish between the two scenarios. For instance, consider a lump of matter accreted onto an otherwise spherical shell of mass. In this case, you might think that gravity would be slightly stronger on the side that the lump accreted. However, it turns out (from the GR field equations) that, although in principle the field is slightly asymmetric, the curvature of space around the black hole acts so as to "bend" the gravitational field lines around the black hole in such a way that, at a (quite small) distance from the event horizon, the field will be (arbitrarily close to being) indistinguishable from the field of a central mass.

I tried to illustrate this in the figure below (with my daughter's crayons and a few of her annotations). The lump is in the lower left, and the green lines depicts its gravitational field. At a distance given by the red circle, it is no longer possible to know whether the lump is in the center or at the event horizon. 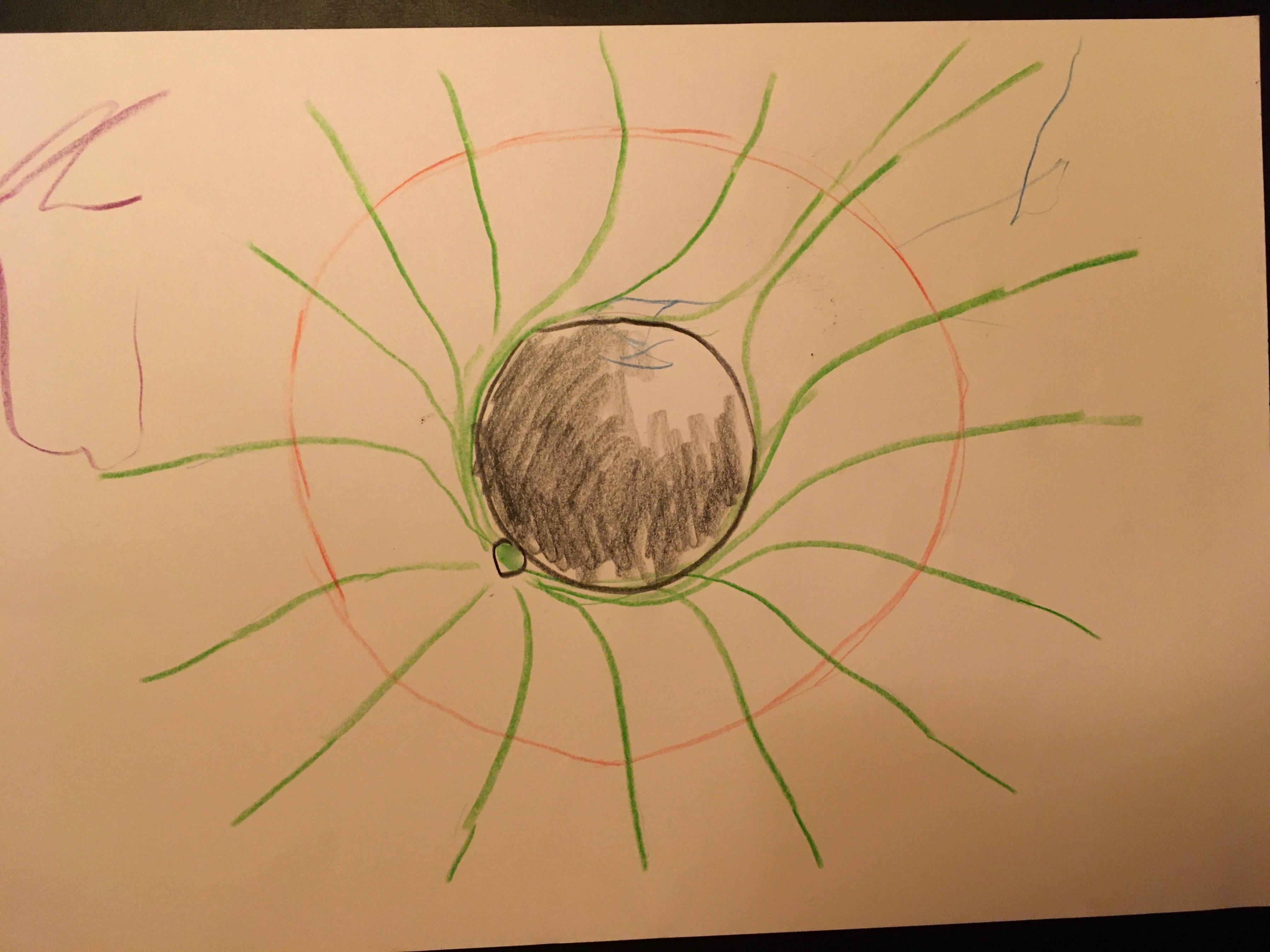 Bonus info: In the early days of black hole research, Russian physicists used to call them "frozen stars" after realizing that, to outside observers, the collapsing stellar nucleus "freezes" as it approaches the event horizon.

Not the answer you're looking for? Browse other questions tagged black-hole singularity or ask your own question.

24
What is a singularity? What is at the center of a black hole? Specifically regarding space-time