Is there a stellar database that indicates how long ago stars in our Galaxy formed?

There are several ways of determining the age of a star: its position in the HR diagram, the presence of a protoplanetary disk, it belonging to a cluster...

The amount of stars being formed as a function of time is shown for instance in Snaith et al 2014, but this doesn't directly translate into a histogram of the age of the stars currently in our galaxy, since the more massive ones that formed early on are gone.

There isn't really a database as you request. Finding the ages of stars is difficult. Only one star has an accurately known age - the Sun. That comes from radioisotope dating of meteorites. For other stars we must rely on models to a greater or lesser extent and we can only estimate an age if the star has a mass or is in a phase of its evolution where things are changing rapidly enough to give some handle on how old it is. For stars at the mass of the Sun or a little bit bigger, one can use evolution in the Hertzsprung-Russell diagram. Stars become more luminous as they burn through their core hydrogen and precise measurements can give an age to about $\pm 1$ Gyr. These are the data that Snaith et al. (2015) use in their paper.

So what Snaith et al. do is they attempt to constrain the star formation history of our Galaxy (or at least stars in the disk of our Galaxy) by making a Galactic Chemical Evolution model that predicts how the abundances of silicon and iron change with time and compare the results of their model with the observed silicon and iron abundances in this set of solar-type stars with reasonably well-estimated ages. Iron and silicon are used because they provide differing constraints. Iron is produced during the evolution of relatively low-mass ($1.5 - 4 M_{\odot}$) stars that live their long(ish) lives (1-10 Gyr), become white dwarfs and then some of the white dwarfs explode as type Ia supernovae. Silicon is produced by massive stars with short lives ($<0.1$ Gyr) and spread promptly into the interstellar medium by core-collape type II supernovae.

A representative lot from Snaith's paper is shown below. The star forming rate is shown in plot (a) and the match of the model to the observational data (they are trying to match the solid green points here) on chemical abundance is shown in the other plots. 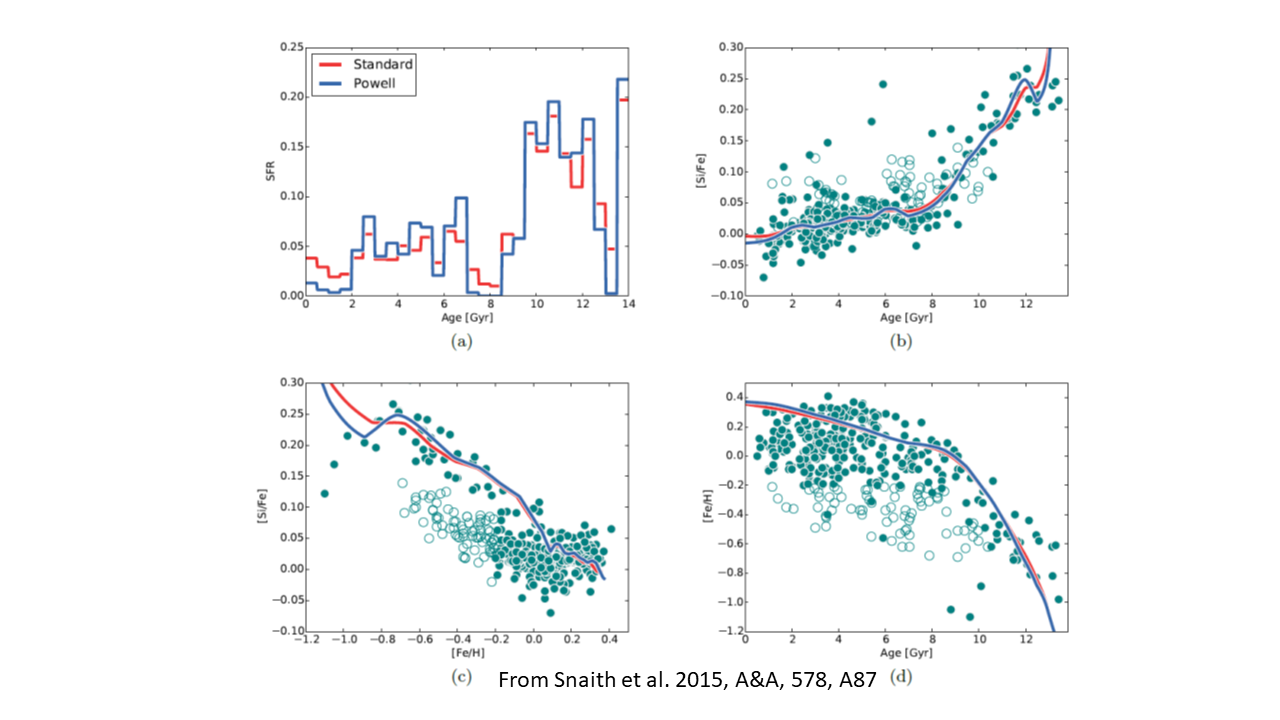 Contrary to what you say in your question this does (almost) represent the age distribution of stars in the Galaxy. That is because the vast majority of stars (90+%) are of a solar mass or lower. Such stars have main sequence life times of 11+ billion years, such that almost every one of them that was born is still a main sequence star now.

But by an large, the upper left plot in the picture is roughly what we expect the age distribution of stars to be in the Galactic disk.

There are a small population of very old stars ($12+$ bilion years), perhaps 1%, that are distributed more widely in the Galactic halo.

In terms of asking the question in the title, there are various catalogues which include stellar ages, if you search on VizieR for the category "Ages" (in the "Astronomy" menu on the right-hand side) you will find a large number of such catalogues, but you will have to bear in mind that they focus on certain sets of objects rather than stars in general.

One example is the Geneva–Copenhagen Survey of the Solar Neighbourhood (which includes F- and G-dwarfs), which has also been used as the source for stellar ages in the XHIP (Extended Hipparcos compilation) catalogue.

Another example is the Lachaume et al. (1999) age determinations for main-sequence stars in the B9–K9 spectral type range.

Computing the age distribution of stars in the galaxy from these catalogues will require correcting for the various selection biases involved, this is not a trivial task.

I don't know about stars in general, but for giant stars, the following histogram shows the age distribution of those in our Galaxy based on their location in the Galaxy. 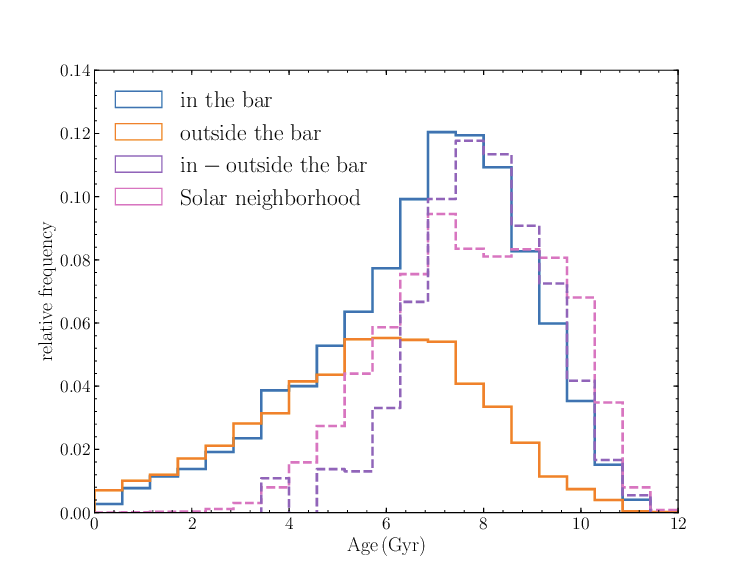 This means that most stars are between 7 and 8 billion years old.

Not the answer you're looking for? Browse other questions tagged star age hr-diagram .

3
Is it be correct to say that we live in a young (only 14 billion years old) universe?

8
How long does it take to produce a star? Why does it take that long?
12
Are there stars that don't emit visible light?
9
Is there anywhere I can find some kind of database on all known stars and their properties (mass, surface temperature, radius, and luminosity)?
7
How were the first stars formed?
6
Can we see the stars at the edge of the Milkyway?
2
Is there a term to describe all stars that are not neutron stars or white dwarfs?
1
How is stellar mass of a galaxy obtained?
2
How does the stellar evolution for low and intermediate mass stars differ?
2
How can a very old star be formed among Population III stars?