Why are perihelion and the shortest day in the northern hemisphere different?

The orbit of Earth is elliptical and the nearest distance to sun is perihelion position. Should it not be the shortest day in the northern hemisphere?

We have "days" because the Earth is rotating. The shape of the orbit has little effect on the daily cycle of light and dark.

The length of the day is determined by the tilt of Earth to the orbit of the Earth around the sun. When the Northern hemisphere is pointed away from the sun, then the sun is low in the sky and is below the horizon for longer. So the shortest day happens when the Earth is at the point in its orbit when the angle that the Earth's axis makes with the line from the Earth to the Sun is greatest. This is on about the 21 December.

The longest and shortest days of the year occur because of the tilt of the planet, which also controls when the Equinoxes and Solstices occur. The tilt of the planet has absolutely nothing to do with its location in orbit, and it's only pure coincidence that they're so close together. Also, perihelion moves over time (apsidal precession) and in 56,000 years it would occur on the longest day in the Northern Hemisphere. Except for the fact that the Earth's axis will have also precessed (with a period of around 26,000 years) so the shortest day will occur somewhere else on in the Earth's orbit

I did not calculate the precise correct position of the sun in the below diagram, but it doesn't need to be precise to illustrate the point. The planet's tilt is toward the upper right of the diagram at all points in the orbit, changing only very slowly in a process called precession that takes many millennia. 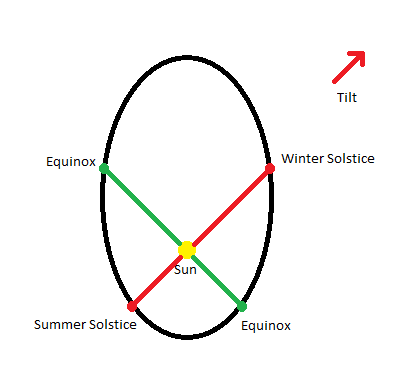 4
Aphelion and the solstice

7
Where exactly does the Moon flip, given that it appears the other way up in the other hemisphere?
6
22nd is shortest day in some places, but the 21st is shortest in other places. Can this be true?
0
On the Equator, why are the shortest shadows seen at 11:32, and not at Noon?
2
Is the shortest day duration constant?
2
Is Earth's true anomaly roughly 1 degree currently?
2
Why is the equinoxes only 2 days and not more?
5
Was the Earth-Sun distance ever calculated based on the time difference between night and day?
3
What would the Earth's peri- and aphelion have to be in order to have the same seasons due to its orbit?