Saint-Exupery describes visit to plateau where he easily finds several meteorites. Is this realistic?

In "Wind, Sand and Stars" Antoine de Saint-Exupéry describes a visit to a plateau where it is extremely easy to discern meteorites from stones, since there are no stones.

I picked up one and then a second and then a third of these stones, finding them at about the rate of one stone to the acre. And here is where my adventure became magical, for in a striking foreshortening of time that embraced thousands of years, I had become the witness of this miserly rain from the stars. the marvel of marvels was that there on the rounded back of the planet, between this magnetic sheet and those stars, a human consciousness was present in which as in a mirror that rain could be reflected.

Is this realistic? Are there places on Earth where you can find meteorite on 5 minute walk?

edit: Judging by this NASA article looking for meteorites in Antarctica is relatively hard.

This is only a partial answer; meteor falls are pretty common and so their density will be high in flat areas without a lot of flowing water, they're hard to identify without a good eye or at least a sensitive metal detector.

Hopefully a more quantitative source for the areal density of meteor finds can be found. The numbers are there, and if all rocks in the area that Saint-Exupéry describes are light in color, then picking up and checking every dark rock and checking to see if it has indications of burning or melting, this might be possible. Of course if it were this easy to collect them there then it seems others would have gone and collected a lot more. But those people have no incentive to document it since they can (often) be sold for cash apparently.

Note that the meteors shown in the image from the PRI article linked below are not dark but the dearth of dark meteorites found in Antarctica is a different story (1, 2) though there's been a lot of progress since 1986 when the document you link to was published.

PRI's Want to find a meteorite? Antarctica might be the best place to look says:

This winter, Lanza has been a rookie member of the ANSMET (the Antarctic Search for Meteorites) field team. For 40 years, the project has sent teams of scientists to the bottom of the globe to recover meteorites from all over the solar system, including chunks of the moon, comets, even Mars.

On this trip? Lanza and her colleagues recovered a total of 569 meteorites.

“They are just waiting for us to come and find them,” Lanza says. “You can imagine that blue ice ... and then you just look and there's some dark spots on them. And those are rocks and frequently those rocks are from space.”

Meteorites fall to Earth all the time, but Antarctica is a particularly good place to find them.

“We're lucky with Antarctica,” Lanza says. “It's this big white sheet covered in glaciers. And so these meteorites just become embedded in the ice and start flowing with the glacier. And in some places the glacier will run into something — like the mountain range that we were in — the Miller range. It will slow down and then the winds ... will start to remove some of that ice and that acts to concentrate the meteorites in these locations. So we can actually go there and find many more meteorites than you might imagine would fall in a single location.”

Nina Lanza knows space rocks. In her day job as a staff scientist at Los Alamos National Laboratory, she operates the Curiosity Rover’s ChemCam, using a rock-vaporizing laser to analyze the Martian surface. 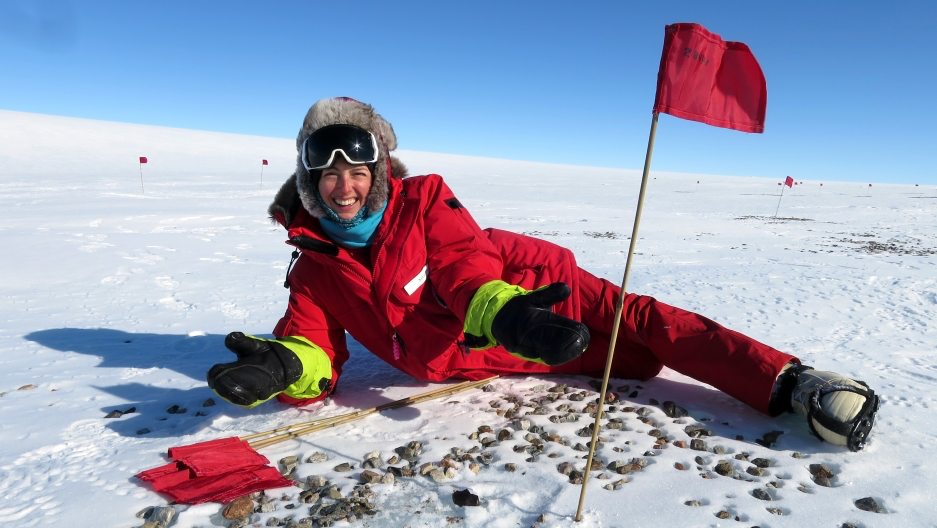 Not the answer you're looking for? Browse other questions tagged meteorite or ask your own question.