How do galaxies move in space?

Kind of like a shower thought just occurred to me. We've all seen lots of animation about spiral galaxies, how they crash... in virtually all of them, I recall they move in a frisbee way, that is their velocity vector is on the same plane as their disc. That sounds wrong... right? What keeps them from tumbling in a random direction in space? Why can't they move like an American football? Or a tossed coin? You know, all the stars within can still go around merrily, but nothing is keeping the whole spiral from moving in a chaotic way.

Before you say that I'm completely wrong to even speculate that, think of our neighbor Andromeda. Fact: its angle to us is not completely edge-on, perhaps 25deg. Fact: many scientists @NASA & other great institutions made high-confident predictions that we're on a head-on crash course with it. Just those 2 facts mean Andromeda OR Milky Way can't be moving along its own plane (or both, lol).

EDIT: when I said galaxies I meant spirals in particular. Also, I think the question above can be rephrased as: in the case of us & Andromeda, what will we see during the next 4.5Gy? Will we see our sister galaxy tumbling while coming toward us, i.e. its angle changes, its appearance dramatically transforms, not just getting bigger in apparent size?

Galaxies move though space independently of the orientation of their axis of rotation. That this is true can be appreciated from the fact that their direction through space is relative; that is, in the reference frame of an observer that is passing the galaxy in its plane, it is moving like a frisbee, whereas in the reference frame of an observer who is moving along its axis of rotation, it is moving like an American football: 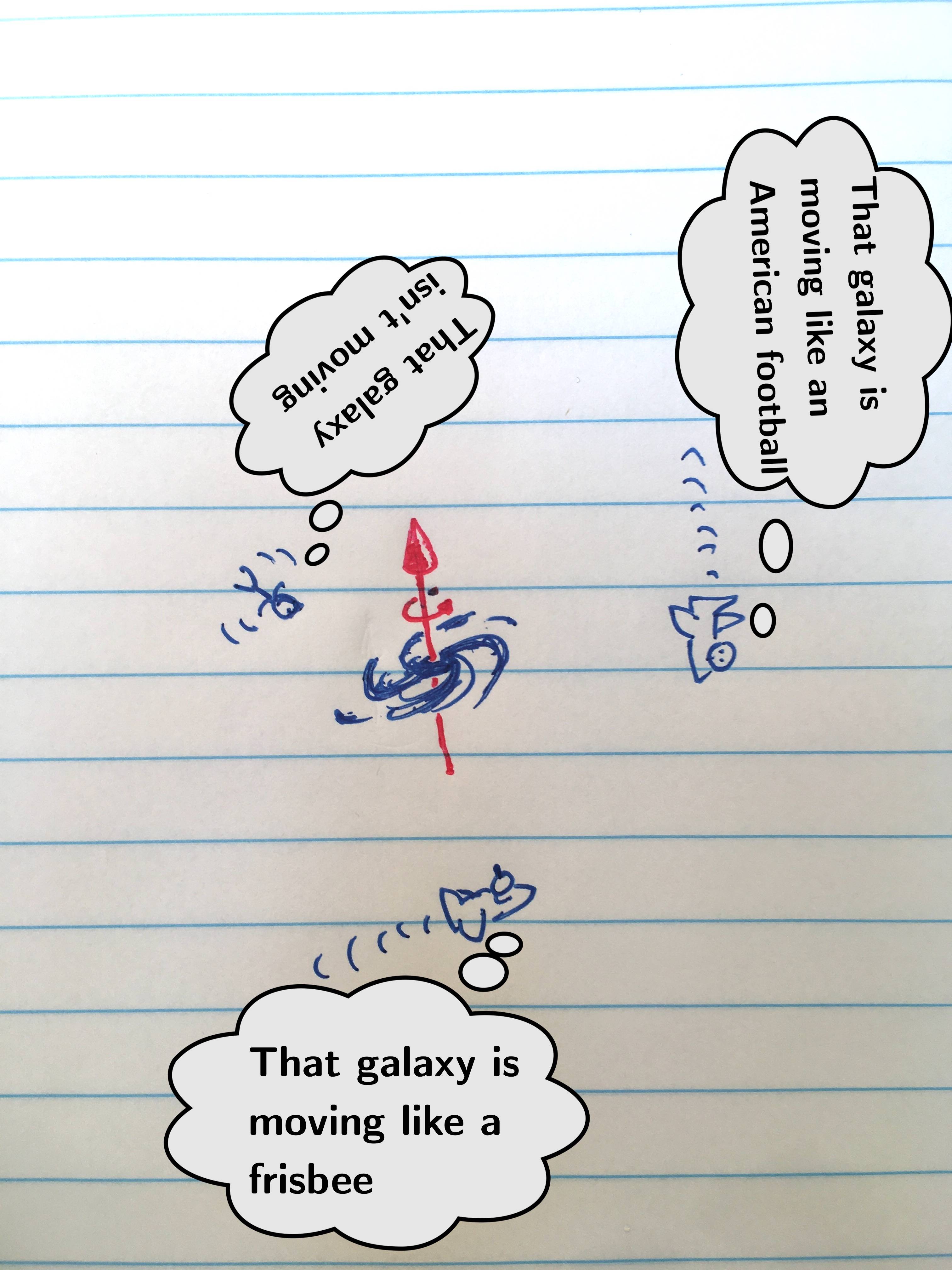 Galaxies form by accreting gas which often lies in filaments of gas, and this is thought to have a tendency to align their spins with the filaments. Higher-mass galaxies grow by mergers along filaments, which should align their spins perpendicular to the filament. I'm unsure if it has actually been confirmed observationally, but it is seen in simulations (e.g. Krolewski et al. 2019). Thus, a merger between a massive and a low-mass galaxy will have a tendency to make them meet with their spins at right angles of each other. But this alignment is only in a broad, statistical sense, and mergers at all angles do indeed occur.

Not the answer you're looking for? Browse other questions tagged galaxy milky-way galactic-dynamics movement .

13
How fast do we travel through space?
11
How do we calculate the escape velocity of galaxies?
1
Question regarding the Milky Way when calculating galactic space velocities for galaxies
66
Does the Milky Way move through space?
3
How Does Earth Move In Relation To The Stars
1
Do the stars in irregular galaxies orbit anything?
1
How do bars form in barred spiral galaxies?