How do they know the non-uniformities seen on the disk of π¹ Gru are real and not artifacts?

@RobJeffries' answer to What is this web on the surface of the Sun? explains why convection cells on some other stars can be far larger than they are on our Sun and includes a near-infrared VLT interferometric image of π¹ Gru from Paladini et al. 2017 as an example.

Of course it's likely that the reconstruction is correct, but I'm still wondering how the possibility that the non-uniformities have arisen through some combination of instrumental and algorithmic effects have been minimized.

Question: How do they know the non-uniformities seen on the disk of π¹ Gru are real and not artifacts? For example, are there similarly generated images of stellar disks of similar angular sizes not expected to have such large convection cells that show more uniform disks? 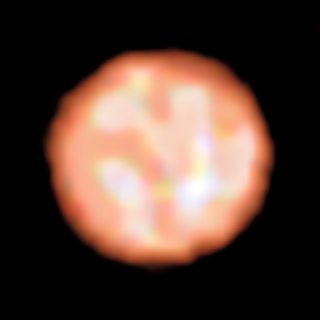 The paragraph you quote continues...

The images from SQUEEZE and MiRa have very similar characteristics and are shown in Fig. 1 (see also the Image Reconstruction section in Methods)

In that section various tests are described including the reconstruction of simulated data, with similar interferometric coverage and signal to noise, from spotted and spotless (uniform) stars with limb darkening.

Not the answer you're looking for? Browse other questions tagged observational-astronomy interferometry algorithm very-large-telescope .

30
What is this web on the surface of the Sun?

3
How do one identify something they see in the sky?
2
How do astronomers at SETI know if they received intelligent radio signals from other planets?
6
How to know that the 21cm Hydrogen line is the actual emission and not any other redshifted line?
5
How do observational astronomers manage streaks and other artifacts from objects in Earth Orbit?
1
When astronomers "look into the past" are they accounting for the expansion of space?
3
What are the challenges for the building and data analysis of the CHIME telescope?
34
Can Pluto be seen with the naked eye from Neptune when Pluto and Neptune are closest?
0
What are the most distant extended objects we can see (or that are seen up till now)?