Can the gravitational potential in a spiral galaxy be positive?

Thinking about this question I wanted to start with a rough model of the average gravitational potential of the Milky way. I ran across D. P. Cox and G. C. Gomez 2002 Analytical Expressions for Spiral Arm Gravitational Potential and Density which I think I can understand at least enough to script it. They started with an analytical density distribution and approximated its potential with an analytical form, later they solved for the exact density which generates it, but I am not using that.

I calculated the first example discussed in Section 4 and at least at first glance it seems to agree with their figures. At large distances the potential tends to zero which is good, but the modulation is both positive and negative! This is true both from my script and in their figures.

Without a repulsive force, I don't think the potential can be positive. What am I missing?

Note 2: I'm using kg meters and seconds for units, so the plotted potential is in m^2/s^2. 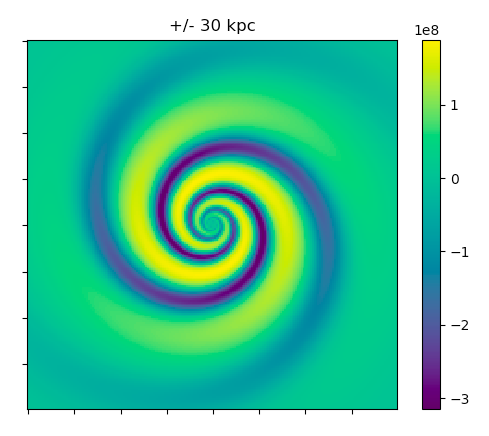 I think your recreation is essentially correct. For example, if you look at Figure 1 in that paper, you can see that the potential goes from positive to negative as a function of the azimuthal angle ("phase").

As they point out (pp.4-5), "The impressions invoked by the density distributions of Figures 3 and 5 can be somewhat misleading. These densities must be regarded as perturbations to an azimuthally uniform stellar disk with the same vertical scale height."

Not the answer you're looking for? Browse other questions tagged galaxy gravity galactic-dynamics or ask your own question.

3
Have parameters been determined for the Fourier components of a Milky Way spiral density-potential model?