How does gravity affect a physical clock?

In all the explanations for time dilation and how gravity affects time a common example which is used is "Clock near to the ground will tick away faster than clock away from the ground due to gravity". But what exactly does this mean ? How does a regular clock gets affected by gravity, does the second hand slows down ? If it has to do something with gravity affecting the inner working of wind up and pendulum clock will this also affect digital clock ?

** I realize I am missing the fundamentals of lotta things in this question, apologies for the stupid question in advance **

I'm going to give a longer, slightly less accurate answer because this is a fun question.

I'll start with special relativity because it's easier to understand.

Using a thought experiment the velocity and time dilation relation is not that hard to see and to calculate it, just use Pythagoras. A photon bouncing between two mirrors can be used as a kind of clock. In a moving ship, the photon appears to move straight back and forth or up and down, but to a person watching the ship fly past, the photon is moving in a V, at an angle, so it travels a longer path. Different distances from different observers, if we are required to use a fixed speed of light, those difference in distances correspond to time dilation.

This is explained fairly often. A few links below or just google "light clock spaceship" 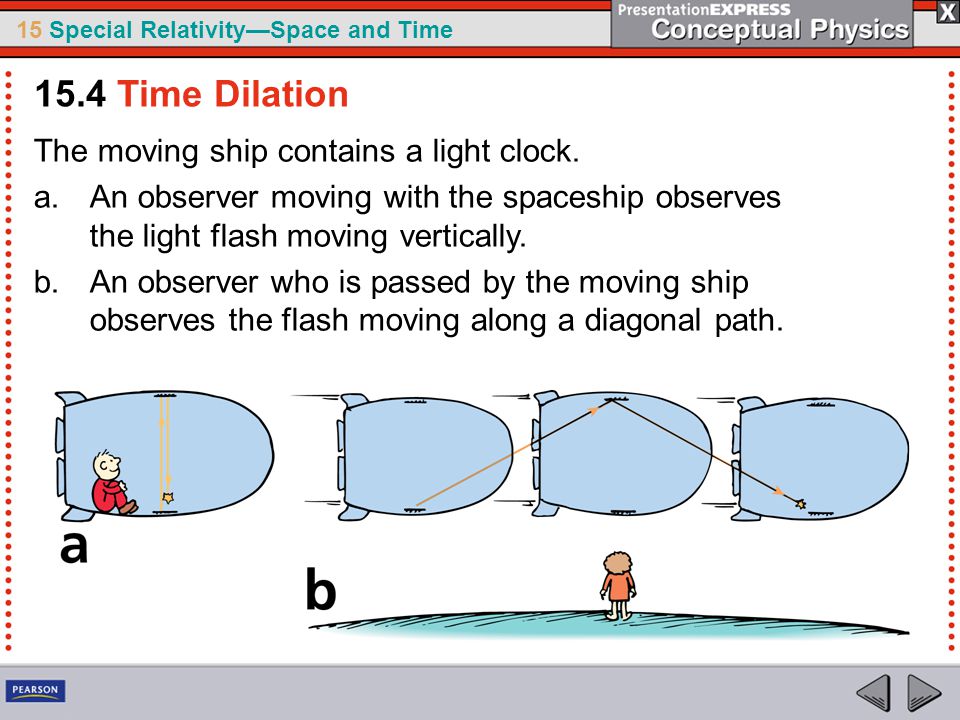 Source of image above.

As noted in the other answers, this tells us what happens but it doesn't tell us how it happens. We accept certain rules either by observation or by calculation. The fixed speed of light is one of those rules, usually called a law in science. It's something scientists have known, or perhaps I should say, reluctantly accepted, since Michelson-Morley. Not long after (or was it before?), the Maxwell-Heaviside equations also worked out a constant speed of light by calculation, so we reached the conclusion of a constant speed of light by two separate methods.

Perhaps if you work out the Maxwell-Heaviside equations yourself, maybe you can kind of get an answer to how the constant speed of light can be explained. I'm honestly not sure. Those equations are a little above my paygrade.

But the fixed speed of light does lead us to variable time. Still not an answer on why or how, but there is a logical correlation between "if this is so, then that is so". So, if I tweek your question a little bit, we might ask, what is the logical correlation for gravity slowing down time because it still seems to stand out as one of those, how do you get there from here problems, even if you can see the spaceship light-clock problem, gravity is harder to picture. We also run into some heavy math, so it's not as neat or easy to explain.

When we do the light clock thought experiment with gravity, or, because gravity is hard to visualize, lets use gravity's nicer twin, acceleration, because we know what that is. Just step on the pedal and . . . it feels like gravity into the seat.

Einstein used an elevator for this thought experiment.

Imagine Einstein's elevator has a flashlight on one side that sends a single photon perfectly perpendicular to the other side. The elevator is not only moving but also accelerating, and I realize elevators don't perform constant acceleration but we're pretending that they do. The accelerating elevator means the perpendicular ray of light curves with respect to the person in the elevator, falling downwards but not in a line like the observer sees in the space ship, but a curve. And because it's curving, for the back and forth we'll need to turn the mirrors upwards a bit, so the light reflects off them and returns to the starting point - replaced with a mirror so it goes back and forth in an arc.

The curve pictured below.

What's always true is that the light is going straight through curved space time and light travels at a constant speed, so different distance traveled reveals time-dilation. This gets a little hard to picture with both acceleration and velocity and it works out to some pretty tricky math called tensors, which are hard to understand unless you're David Hilbert or equivalent, but you have a curved or a straight ray of light depending on your point of view. You have light traveling different distances and that implies different time dilations. Now, maybe I got something wrong in there, but that's kind of the idea that light travels different distances based on the observation which implies different rates of time.

If you don't like that one, a more common experiment is what happens to the light moving against the gravitational field. A well known example of this is the Harvard Tower experiment also known as the Pound-Rebka experiment. Some people, perhaps most people find that explanation easier to follow. I like the light clock in an elevator personally.

If it has to do something with gravity affecting the inner working of wind up and pendulum clock will this also affect digital clock ?

As astrosnapper noted in his comment, gravitational time dilation affects all time-dependent processes. This includes not only clocks (including digital clocks and atomic clocks), but also the rates at which chemical reactions and radioactive decay occur, measured relative to the equivalent process far removed from the Earth's gravitational well.

If you want an explanation regarding why this happens, the answer is no one knows. As noted above, general relativity is a descriptive theory. It explains what will happen but it does not explain why.

A physics professor once described the following exchange, and I found it immensely helpful. It's not an exact answer, but the formatting requires an answer post.

Answer: (hover your cursor to reveal)

Time is what a clock measures.

In the context of this question this means that whatever effect you are considering it is an effect on time, not on the clock. The clock continues to measure time in the same way it always did. 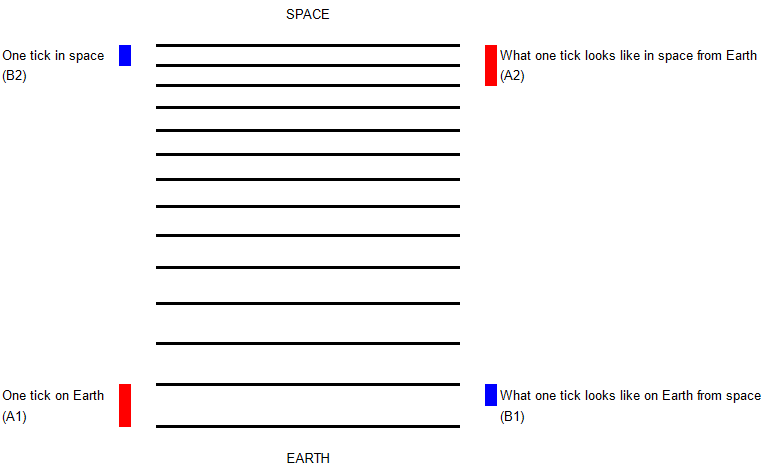 This is a way of visualising time dilation due to gravity. A mass like the Earth bends spacetime. In the picture, this is visualised as spacetime getting more stretched out the closer you are to the Earth, shown by the black horizontal lines becoming more spaced out. As uhoh said in his answer, “Time is what is measured with a clock”. On Earth, you measure one tick with your clock, which is just any fixed interval. This could be an oscillation in an atomic clock, the swing of a pendulum, or a tick of a second hand.

This tick is shown by the red line at A1 in the picture. On Earth, with one tick the same height as a spacetime “gap”, you might call this “one second”. Now, when you use that same tick that you’re used to on Earth, and use it to measure the time you observe from Earth in space, e.g. on the space station at A2, you see that the same tick now lasts 2 seconds in space (because your one tick is the height of 2 spacetime gaps). To you on Earth, it looks like the clock in space is running fast.

The converse is also true, from the point of view of the space station. The astronauts have their “one second tick”, the blue line at B2. When they use that tick to measure the time they observe on Earth, their tick seems to them to last half a second on Earth. To them, Earth time appears to be running slow.

Not the answer you're looking for? Browse other questions tagged gravity time-dilation .