Why isn't the asteroid belt affected by Jupiter's gravitational field?

Jupiter's mass is just about a 1000th of the sun's and the asteroid belt is slightly closer to Jupiter than it is to the sun.

If the heavier the object, the more curvy space is around it, why isn't the asteroid belt's movement more turbulent owing to the effect of both Jupiter and the sun?

The asteroid belt is affected by Jupiter's gravity.

As they pass Jupiter on their orbit they will get first a pull forward, and then a pull back but as these pulls happen at different locations on each orbit they tend to cancel out and result in effects like precession of the asteroid's perehelion or periodic variations in eccentricity. These effect act on the Earth and other planets too.

However if the time the asteroid takes to orbit the sun happens to be an exact fraction of the time that Jupiter takes, then it might receive the same pull at the same location. Resonant orbits like this tend to be unstable. The asteroid will be nudged out of the resonant orbit and into one that doesn't match up with Jupiter. This creates the Kirkwood Gaps in the asteroid belt. 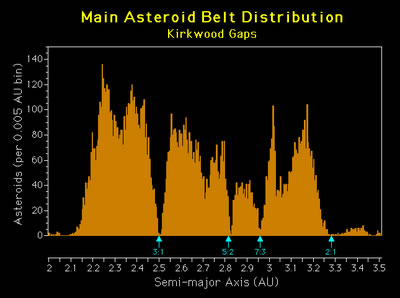 Not the answer you're looking for? Browse other questions tagged the-sun jupiter asteroid-belt .

60
Why is the asteroid belt shaped like a triangle?

14
Is the Jupiter-Sun system considered a binary system of some type?
5
Connection between Earth, Moon, Theia, and asteroid belt?
9
Can the asteroid belt be seen from Jupiter?
3
Which is the farthest distance a particular distant known- identified object from the asteroid belt can get from the sun?
15
The compatibility of the Grand Tack hypothesis with the "core-warping impact" theory of Jupiter's diffuse core
1
Why isn't there a large gap in the number of captured moons Jupiter and Saturn have?
6
When will Callisto be in orbital resonance with the rest of Jupiter's big moons?