Why is the asteroid belt shaped like a triangle?

So, in this question, the user JollyJoker posted this image depicting the orbits of the asteroids in the asteroid field in the comments:

In this image, you can see that while the individual asteroids follow elliptical orbits, the asteroid belt as a whole is a giant triangle with the Jovian Trojans at two corners, and a third corner directly opposite Jupiter, and the whole triangle orbits in sync with Jupiter.

Is this image accurate? Is the Asteroid Belt actually a giant triangle, rather than the loose circle it is often depicted as? If so, why is this the case?

It's not. The image doesn't show the main asteroid belt. It shows the Jovian Trojans (in green) , and the Hilda Asteroids (in red).

The Hildas are a dynamical group of a few thousand known asteroids in elliptical orbits that are locked in a 3:2 orbital resonance with Jupiter, and reach aphelion coinciding with the regions near Sun-Jupiter Lagrange points L4, L3, and L5 in succession. 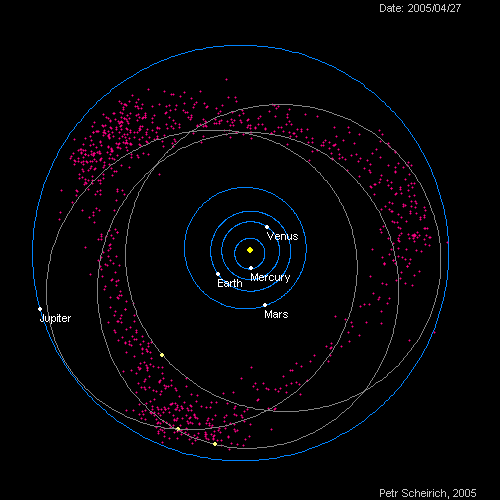 In accordance with Kepler's Second Law, objects in elliptical orbits move slower near aphelion than perihelion, and as a result, when you just look at the Hildas, they bunch up near the Lagrange points, and the pattern they appear to show at any one time resembles a triangle.

A more complete view of all the Asteroids inside of Jupiter looks like this.

Not the answer you're looking for? Browse other questions tagged orbital-mechanics asteroid-belt .