Why does the Sun track out a seemingly sinusoidal path on the celestial sphere?

The question arose because I wanted to understand the path of the ecliptic after reading about it here: https://community.dur.ac.uk/john.lucey/users/solar_year.html

Is the sinusoidal path due to earth’s axial tilt? Or is it related to mapping the path on a 2D pane? Is there way to visualise this to aid understanding?

Both the equator and the ecliptic are great circles on the celestial sphere. The appearance of each on a map depends on the map projection.

In an equirectangular projection centered on the equator, the equator (brown) is a straight line, and the ecliptic (blue) is a sinusoid.

Lucey provides both views too, but his ecliptic-centered map doesn't show the equator. The axes are labeled in ecliptic rather than equatorial coordinates.

He also provides a stereographic projection centered on the midday zenith at 55°N. Here both equator (red) and ecliptic (green) are mapped as circular arcs. 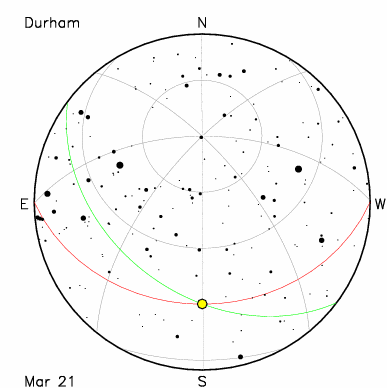 Here's a diagram from Wikipedia that might be helpful:

Not the answer you're looking for? Browse other questions tagged celestial-mechanics ecliptic or ask your own question.