How to understand the meaning of this International Occultation Timing Association (IOTA) lunar occultation of Mars map?

Earthsky.org's Watch Mars disappear behind the moon on February 18 as well as Moon occults Mars morning of February 18 include the image below and credit it to The International Occultation Timing Association or IOTA.

But I can't understand the meanings of the various colored lines on the map. There's the big blue droopy infinity sign, and attaching to both ends an upward-facing hyperbola with three colored segments.

I went to https://occultations.org/observing/occultation-predictions/ and clicked the Lunar Occultations link, but it only returns error 404 file not found.

Is it possible for someone to explain the meanings of these lines? 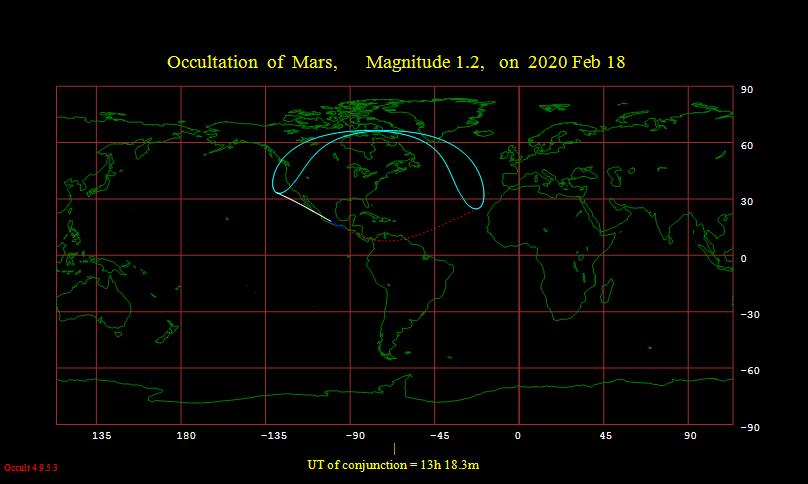 Unfortunately, there was a server problem in the days leading up to the exciting Mars occultation. (It didn't matter to me because it was, unfortunately, cloudy where I live.)

This description of the colored lines is from a temporary page provided by IOTA:

The turquoise curves show where the disappearance or reappearance occurs at moonrise (left side) or moonset (right side); there is no northern limit as that misses the Earth to the north. The southern limit of the occultation, from which a partial occultation will be visible in a strip about 5 miles wide, crosses the n.e. Pacific Ocean and southern Mexico (white line, event at night), Central America (dark blue line that’s hardly visible, event during morning twilight), and northern S. America and the Atlantic Ocean (red dotted line, event during daylight).

If I am interpreting the image correctly, the limits are as follows (tl;dr 5: Entire occultation is visible)

Sometimes the colors along the graze line (the southern limit in this case) represents whether the graze occurs on the dark limb of the Moon or the bright limb, but that does not appear to be the case here.

Not the answer you're looking for? Browse other questions tagged the-moon mars identify-this-object occultation .

2
Between Mercury and Venus, which planet produces a longer transit? Assuming both planets describe same path on the solar disk

9
How did the Mars satellites "take cover" from the recent comet flyby?
9
How easy would be to see the Moon from Mars?
3
Where and how to look up the coordinates and magnitude of the star in this occultation prediction?
2
How to understand this multi-day exposure photograph of Jupiter and the Moon
3
Historical lunar occultation of Venus seen from Sicily in the winter?
6
Is the Object in this Photo Mars?
3
Does a lunar occultation of Mars happen twice a year?
1
How to calculate the period of a lunar mansion?