What is considered "contact" for contact binary white dwarfs, and roughly how long can they stay that way before merging?

The question Why do they think that WDJ0551+4135 is “snowman shaped” i.e. a contact binary? has also raised the question of what a contact binary is or isn't, and how hard it might be to see one if it is, so let's explore this separately and then hopefully establish some usage guidance for the contact-binaries tag.

"bonus points:" Are there any contact binaries we can see by eye or with binoculars or a small telescope? (wouldn't have to be white dwarfs) Could we see one vary in brightness and/or color as the pair rotates?

From the BBC article cited in the linked question: 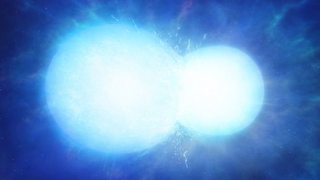 Artwork: The object may be two so-called 'white dwarves' merging into a smaller denser star

The issue I see here is that as a white dwarf gets more massive, it gets smaller. So in white dwarf–white dwarf mass transfer, the accretor will shrink, i.e. it evolves away from contact. Meanwhile the donor will tend to expand and lose mass faster through the L1 point.

So it might not even be possible for white dwarfs to form a stable contact binary. Proving a negative is somewhat tricky though.

There has been research into simulating white dwarf mergers. Dan et al. (2011) "How the merger of two white dwarfs depends on their mass ratio: orbital stability and detonations at contact" show several scenarios in their figure 7. The 0.6+0.55 M⊙ collision looks a bit like the Mark Garlick artwork from the press release, but it's on the line where disruption occurs on a timescale of ~20 orbits so it wouldn't look like that for very long until it merges and (judging by figure 10) undergoes contact-induced helium detonation.

From what I can tell, the usual use of "contact" in regards to white dwarf binaries refers to when matter from the secondary impacts (contacts) the primary, either by direct collision or mass transfer.

In terms of visible contact binaries, the brightest of the W UMa variables is Epsilon Coronae Australis which varies between magnitudes 4.74 and 5 over the course of an orbit. The next one is the secondary of 44 (i) Boötis, which is somewhere close to magnitude 6 (the magnitudes listed for its entry in the General Catalogue of Variable Stars include the contribution from the primary star).

Not the answer you're looking for? Browse other questions tagged white-dwarf contact-binaries .