Such questions have been asked here and I have read the answers some of which are quite informative. However, I want an answer that's straightforward.

I have gone through the following paper by A B Turner titled The Moon's Orbit Around The Sun. 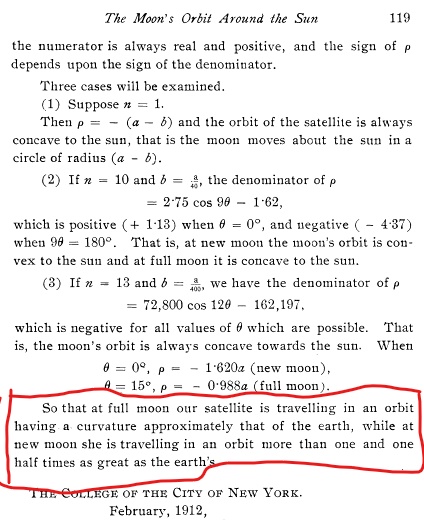 $k_n$$\approx 1.5k_f$, which is intuitive considering the fact that in the new moon positions, the moon experiences gravity from both the Sun and the Earth in almost the same direction.

The case (2) example b value is too large for a stable orbit around the Earth. Instead we can model a geosynchronous satellite with n = 366 and b = a / 3550. Then ρ is +0.0218 a on the day side and -0.0314 a on the night side. This trajectory is alternately concave toward and away from the Sun, resembling Turner's figure 1 but with shorter waves.

Between cases (2) and (3) we can find parameters such that, on the sunny side of the Earth, the ρ expression denominator approaches zero and the trajectory is momentarily straight. This is nearly the case if n = 24 and b = a / 575, corresponding to a 15.2 day orbit at 0.677 lunar distance.

Any curvature in an object's trajectory is due to acceleration in the direction of the net force acting on it. We know from Newton that $$ F = \frac{G m_1 m_2}{r^2} $$

For the Moon, the Sun is ~390 times as far as the Earth but 330,000 times as massive, so the Sun pulls roughly twice as strongly: $F_\oplus$ ≈ 0.45 $F_\odot$. At full moon, both Sun and Earth pull the Moon in the same direction, and the combined force is 1.45 $F_\odot$ toward the Sun. At new moon they pull in opposite directions; the resultant force is only 0.55 $F_\odot$ but still toward the Sun. While the radius of curvature fluctuates, the direction of curvature never reverses.

This is a good question and you are of course absolutely right to wonder how it can possibly orbit the Sun without its trajectory being concave to the Sun not only a little bit of the time, but for a substantial fraction of each orbit around the Earth.

The answer is that the Moon's motion is always concave to the Sun and there's nothing in the article that says anything to the contrary. Curvature doesn't usually have a sign. When we draw problems we can say "curves to the left or right" but $k = 1/R$ where $R$ is the radius of the osculating circle, and we always take the positive value for $R$. If we move to more complex vector notation and include the direction of motion we can talk about the direction of the angular momentum vector but that's beyond the scope of this problem.

In the beginning of the paper the author says explicitly that the Moon's orbit is always concave to the Sun:

Owing however, to the fact that the Moon’s distance from the Earth is very small in comparison with the Earth’s distance from the Sun (about 1/400), and also to the fact that it makes about 13 revolutions around the Earth in a year, it is better to consider the Moon’s path as that of a body describing an orbit around the Sun, and which is constantly being slightly disturbed by the pull of the Earth. Such a path would always be concave to the Sun, but close to the Earth’s orbit, crossing it twice a month.

So how do the Earth-Sun and Moon-Sun distances behave if we forget that they are moving in giant circles?

If we forget that the main concavity is always there and just look at the fluctuation, the Earth gets a little closer and farther during the year, but the Moon is quite busy! It is constantly moving slightly closer and slightly farther. This doesn't mean that the motion is not always concave toward the Sun, but it does mean that the distance between the Moon and the Sun had more than a dozen maxima and minima per year! Who'da thunk it? 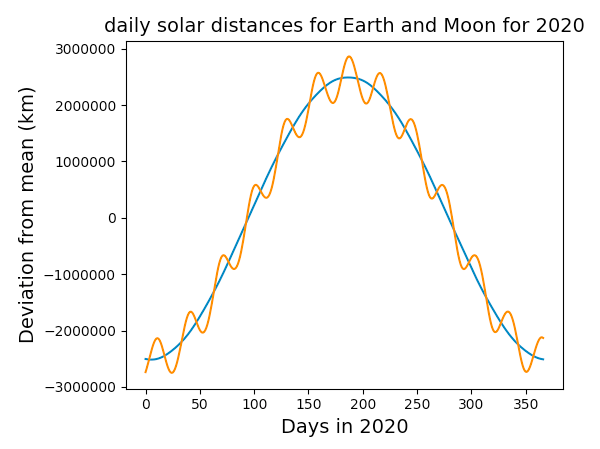 Here's a quickie of what the Incorrect View would look like if it were correct per request in comments:

I think what you may be missing is that $\rho$ is a smoothly changing value. The functions listed are continuous and everywhere differentiable, and as the text says, there is never a sign change, The path the moon follows is not "wavy", even though it does go from behind to in front of the Earth.

To get the longer answer, a definition of what "convexity" means is needed. This is easy for a simple closed plane curve: A simple closed plane curve (aka a Jordan curve) is convex if for any two points on the interior of the curve, all of the points on the line segment connecting the two points lie in the interior of the curve.

Unfortunately, neither the Earth's nor the Moon's path about the Sun is closed or planar. To resolve these issues, I'll first do what the referenced paper did, which was to instead investigate coplanar circular orbits of a point mass planet about a star and of a infinitesimal point mass moon about the planet, such that

This curve is still non-convex, as exhibited by how the primary normal alternates between pointing inward and outward. the curvature of the moon's path about the star is zero at these transition points: The path, at least instantaneously, is a straight line. This happens because the acceleration vector is parallel to the velocity vector at those transition points.

These critical points occur where the acceleration of the moon toward the star is identically zero. This should not be surprising as there is a very close connection between velocity, acceleration, and curvature. In particular, the curvature of a curve at some point is $$\frac{d\hat T}{ds} = \frac{(\vec v \times \vec a)\times \vec v}{v^4} = \kappa \hat N$$ where $\hat T$ is the unit tangent, $\vec v$ are the velocity and acceleration of a point that follows the curve over time, $\kappa$ is the curvature (the inverse of the radius of curvature), and $\hat N$ is the primary normal to the curve. A simpler expression for the curvature is $$\kappa = \frac{||\vec v \times \vec a||}{v^3}$$

Note that the vector $\vec v \times \vec a$ points in the direction of the unit binormal. This suggests a simple metric that extends to non-planar orbits: An orbit about some central point if the cross product between velocity and acceleration with respect to that central point always lies in the same half plane. An even easier metric is to test whether the magnitude of the gravitational acceleration toward the star is greater than that toward the planet.

Not the answer you're looking for? Browse other questions tagged the-moon solar-system astrophysics orbital-mechanics .

24
Why is the Moon's orbit so complicated?
16
Moon's orbit around the Sun
5
What is the average angular distance between the Sun and the Moon?
4
Does the earth spiral around the sun's movement/motion path?

14
Why does the darkening of the Moon go from left-to-right during an eclipse?
2
Full Moon Position of Sun
4
Non-Newtonian motion of the moon
7
If earth changed its orbit, what would happen to the moon?
9
When the Moon formed and early on, did it orbit over the Earth's equator?
2
What is the cycle for when the maximum amount of the Moon's apparent area is sunlit?
24
Why is the Moon's orbit so complicated?
4
Moons with curlicue paths around our Sun?
5
What is the average angular distance between the Sun and the Moon?