Why are only some of the geologic features in Mars' Noctis Labyrinthus region named?

I found this page Names Approved for Six Cavi and a Tholus on Mars which lists seven features on Mars. I'm curious about the decisions to name only these features: Dalu Cavus, Layl Cavus, Malam Cavus, Nat Cavus, Noc Cavus, Usiku Cavus, and Noctis Tholus in Noctis Labyrinthus. Why only some of the canyon, graben and/or valley locations are named? Does it have to do with the depth of the features? 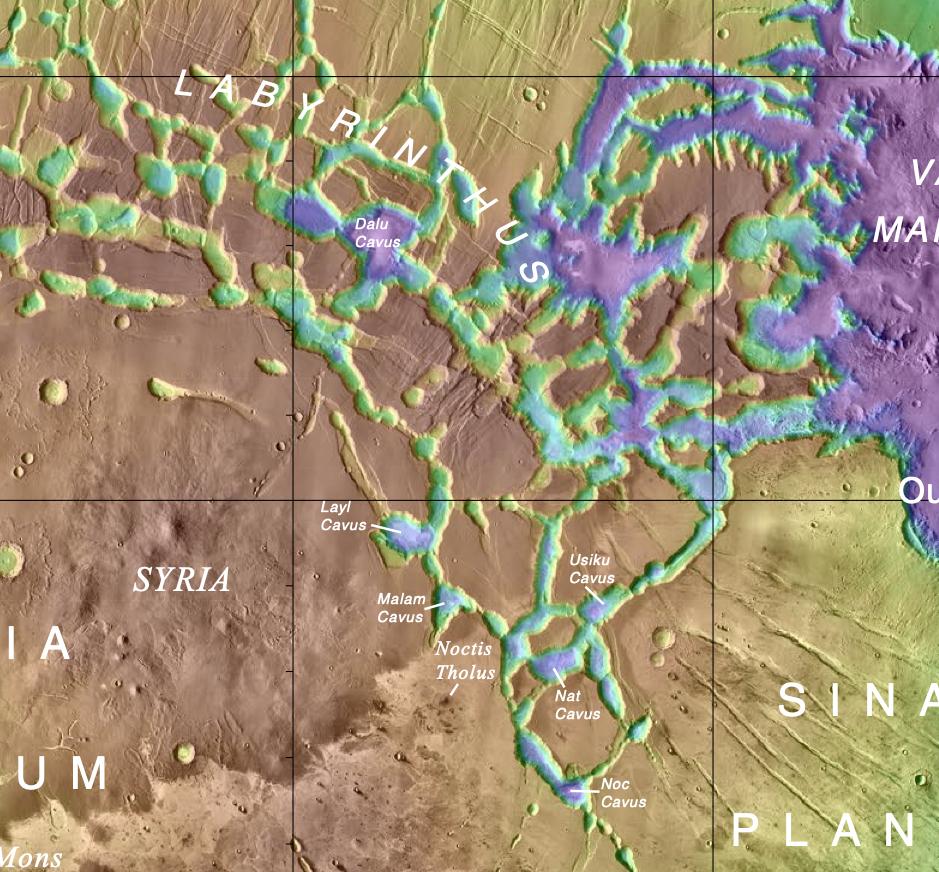 Nomenclature on planetary bodies is meant to ease and standardize communication. If an object is referred to often, or if it is important for someone's research, then the scientist(s) involved can submit a name request to the International Astronomical Union (IAU), or through some other body that submits names to the IAU (such as the United States Geologic Survey's Astrogeology branch in Flagstaff, AZ). After checking for various criteria*, the name may or may not be approved. If it is approved, then the feature is named. If it is not approved, then the scientist(s) can resubmit that name or a different name.

I am not sure if it is a full list, but the USGS's Gazetteer of Planetary Nomenclature lists a lot of the themes on different bodies. Based on that, cavi and tholi would be named based on nearby albedo (brightness) features or craters.

*Criteria for naming are extensive. Almost every type of feature (such as an impact crater) on many bodies has a theme, and that theme must be followed. If the name does not meet that theme, then it will be rejected. Other criteria are that the name cannot be offensive or induce a strong negative response (such as naming something "Satan" could induce a negative response in many people); the name cannot be used elsewhere in the solar system already (though some historic exceptions exist); the feature must be well defined (a vague region on a surface would not, therefore, qualify); the feature cannot be named after someone who is alive or has died less than three years ago; and there cannot be a preponderance of names that are biased towards or against gender, nationality, region of the world, etc.

Not the answer you're looking for? Browse other questions tagged mars iau nomenclature or ask your own question.

1
Why is Mars' atmosphere so thin?
11
Are there large underground caverns on Mars?
4
What are these dark spots on Mars' north pole?
8
Why are Mars northern/southern hemisphere altitudes so different?
3
How are mars years counted?
2
Why are cirrus clouds more common on Mars?
1
How are the three character IAU Minor Planet Center's Observatory Codes assigned? Why are some letters so popular?