Was the “green star” event in NGC 3314 ever figured out or named? 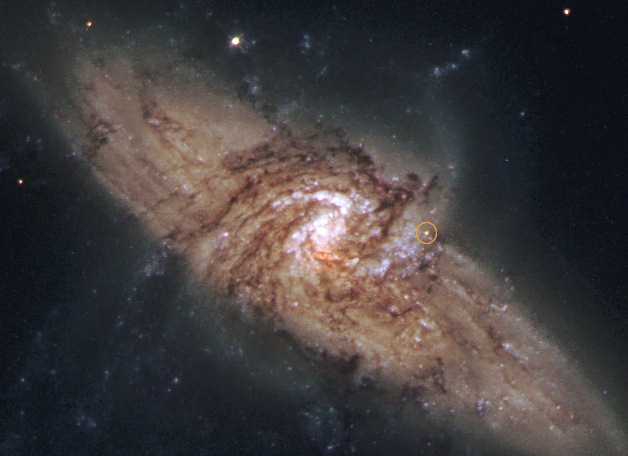 from NGC 3314 Variable Object by By Bill Keel (University of Alabama, Tuscaloosa) and Lisa Frattare (Hubble Heritage Project, STScI). The object in question is circled.

In a March 2000 observation of the galaxies, a prominent green star-like object was seen in one of the arms. Astronomers theorized that it could have been a supernova, but the unique filtering properties of the foreground galaxy made it difficult to decide definitively.1

which explains the story, including:

Tracking down a stellar explosion We first noticed a new object in NGC 3314 while discussing the details of color rendition for the Hubble Heritage release, incorporating data from both the 1999 and 2000 observations in all four filters. There was a prominent green starlike object in one of the spiral arms. "Prominent" is relatve here; the visual magnitude was 21.6. Green stars are not found in nature, because the spectral band we see as green is narrow compared to the amount of light stars put out in various wavelengths, so this was a signal of something quite unusual. This was quickly traced to an object appearing only in the March 2000 observations, so that combining data from some filters in which it was there and some in which it wasn't produced the giveaway color. The fact that we had blue-light images from both sets of data let us show that it had indeed newly appeared, and was not some object with a bizarre spectrum that vanished in some filters. In asking what kind of new object this was, we could quickly eliminate several possibilities:

To get this observation on the record, and seek confirming or prediscovery observations, we reported it to the Central Bureau for Astronomical Telegrams, who included it in International Astronomical Union Circular 7388. To date we've gotten no reports of other observations, or of helpful non-detections in 1999 or 2000. So if you happened to take a deep image of NGC 3314 during this period...

Question(s): Rather than ask a half-dozen questions that likely won't be answerable individually, I'll lump them here. If there are answers to some but not others I'll accept them and edit the question to narrow it to what's answerable.

IAU circular 7388 says the following but doesn't give a name

tl;dr No additional data of interest, but I explain how I searched, and I can explain the green color.

It seems that there have not been any additional observations of that object, which perhaps isn’t too surprising given how faint it is - 21st magnitude is possible only with big telescopes.

Simbad lists that object under the name of “EQ J103712-274051” but doesn’t list any other names, nor any references besides the IAU Circular already mentioned. That’s a purely coordinate-based designation, with the “EQ” meaning it is based on equatorial coordinates. Simbad says that that designation is internal to Simbad for objects of unknown nature and is to be avoided in the literature.

Looking at ADS, the only citation for the IAU Circular is a 2019 paper by Bonanos et al., which is a catalog of HST variable sources. That seems promising on its face, but digging into the paper it turns out that the sources they flag are different ones, and the citation is in a footnote that says, “This object is unrelated to the transient in NGC 3314 reported in the IAU Circular 7388 by Keel & Frattare (2000).”

I also looked for further observations in Vizier- that can be a good way to find observations of a given source, even if it wasn’t called out specifically in a publication. While that search yields lots of objects within 5”, especially in HST observations, none of them seems to quite match up in coordinates and magnitudes with what Keel & Frattare report in the IAU Circular.

Regarding the green color that drew their attention to the object in the first place, here’s my interpretation of what they are saying there. First, note that HST filters are (usually) named with “F” for filter (as opposed to “G” for grism), a number that gives the filter effective wavelength in nm, and then “N”, “M”, or “W” for “narrow”, “medium”, or “wide”, indicating the width of the filter bandpass. So the F450W filter is similar to Johnson B, for example, and the F555W and F675W filters are green and red, respectively.

From 1999, when the object wasn’t bright, they had blue and red images. From 2000, after it brightened, they had blue, green, and red images. (The 1999 “red” data, F814W, are actually near-infrared, but I’m guessing they used those in the red channel for the Heritage image.) So in combining to make an RGB (color) image, they had two each of red and blue images (one before and one after brightening), but only one green image (after brightening), which they would have needed to weight doubly in the composite to get a reasonable color balance. That’s why that object ended up looking green - they weighted the “bright” green data twice as much as the “bright” red and blue data.

I just realized that it would be possible to test the idea above by downloading the individual filter images from the HST data and looking at them directly. Fortunately, the Hubble Legacy Archive makes this pretty easy to do, and even provides pre-combined color images for datasets where multiple filters were taken. So we can directly download images made from data only before and only after the outburst of that object and see what they look like.

This search gives all WFPC/2 images of NGC 3314, and we can see that there are some from 1999 and some from 2000. Those are the pre- and post-outburst data, respectively, that were combined in the original press release images shown above. If you look in the column that says "Level", the Level 4 data products are color composite images. The two options there are composites of the 1999 data and of the 2000 data. Let's look.

Here are the 1999 (pre-outburst) images, which are only in red and blue filters. Presumably the color composite fills the green channel with some combination of the red and blue: 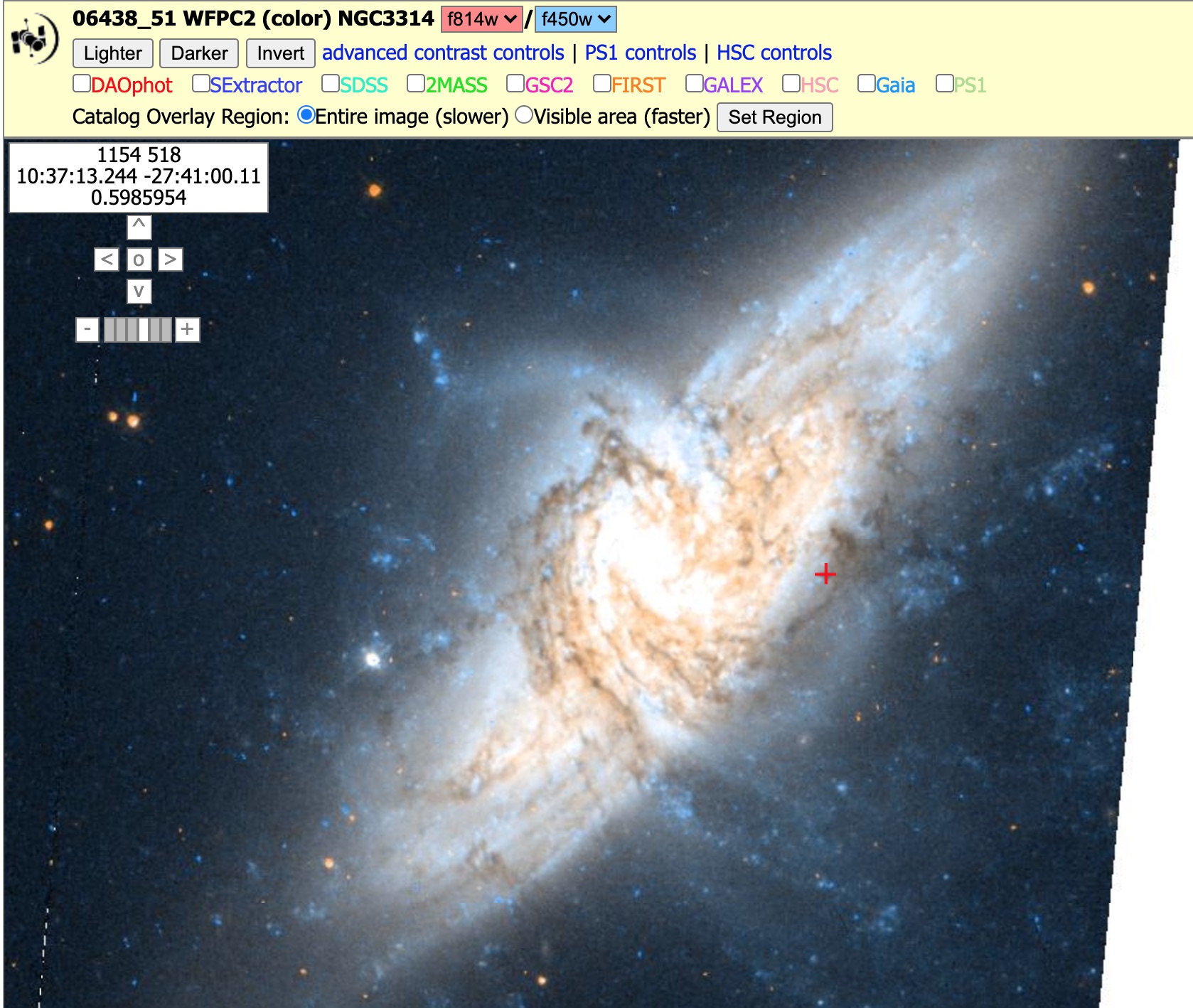 And here are the 2000 (post-outburst) data, combining images in red, green, and blue filters: 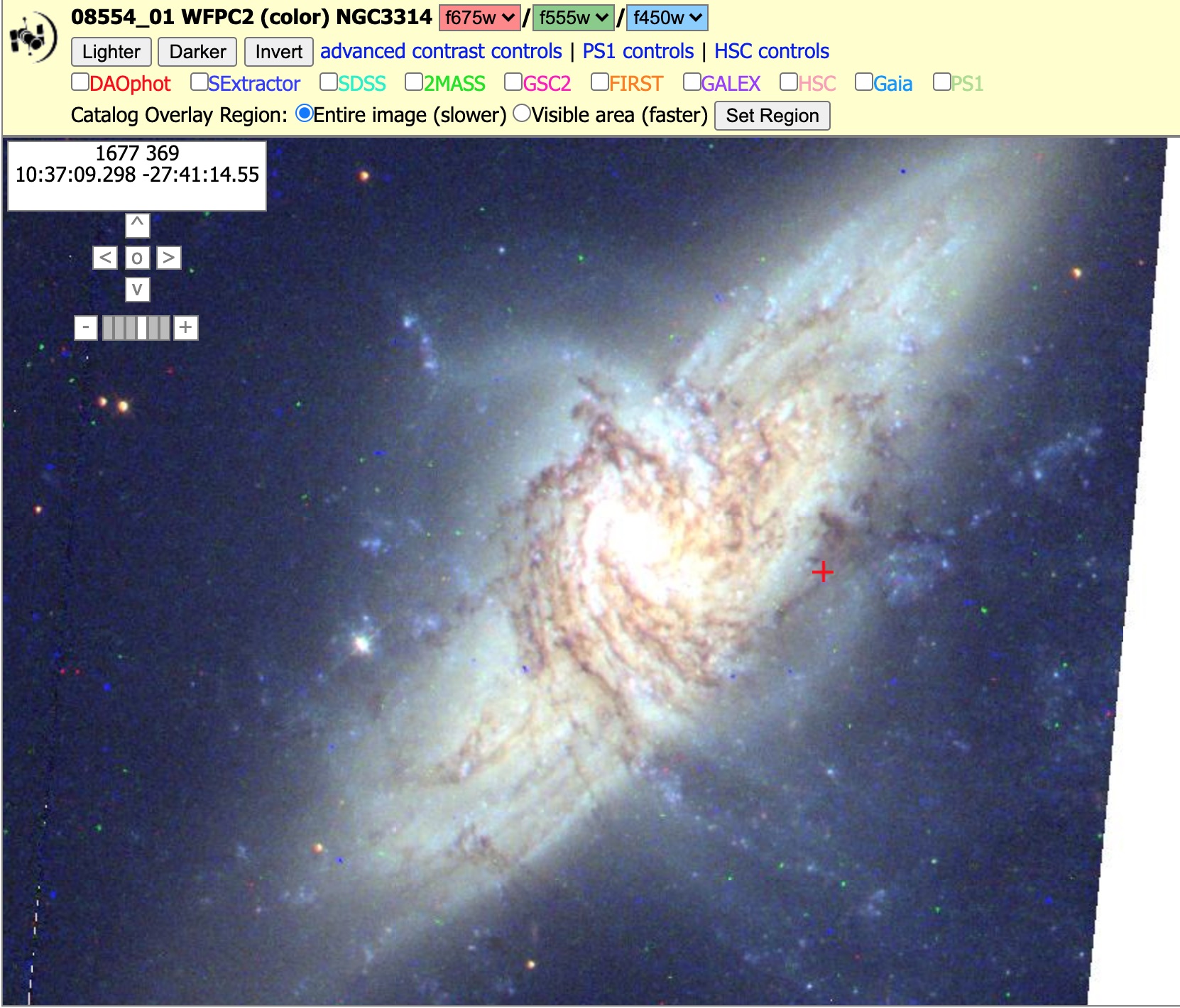 Below I've zoomed in and taken a screenshot, trying to get the images centered as close to the same as possible. I've positioned them so the object in question is just to the left of the red crosshairs. Top is 1999, bottom is 2000. 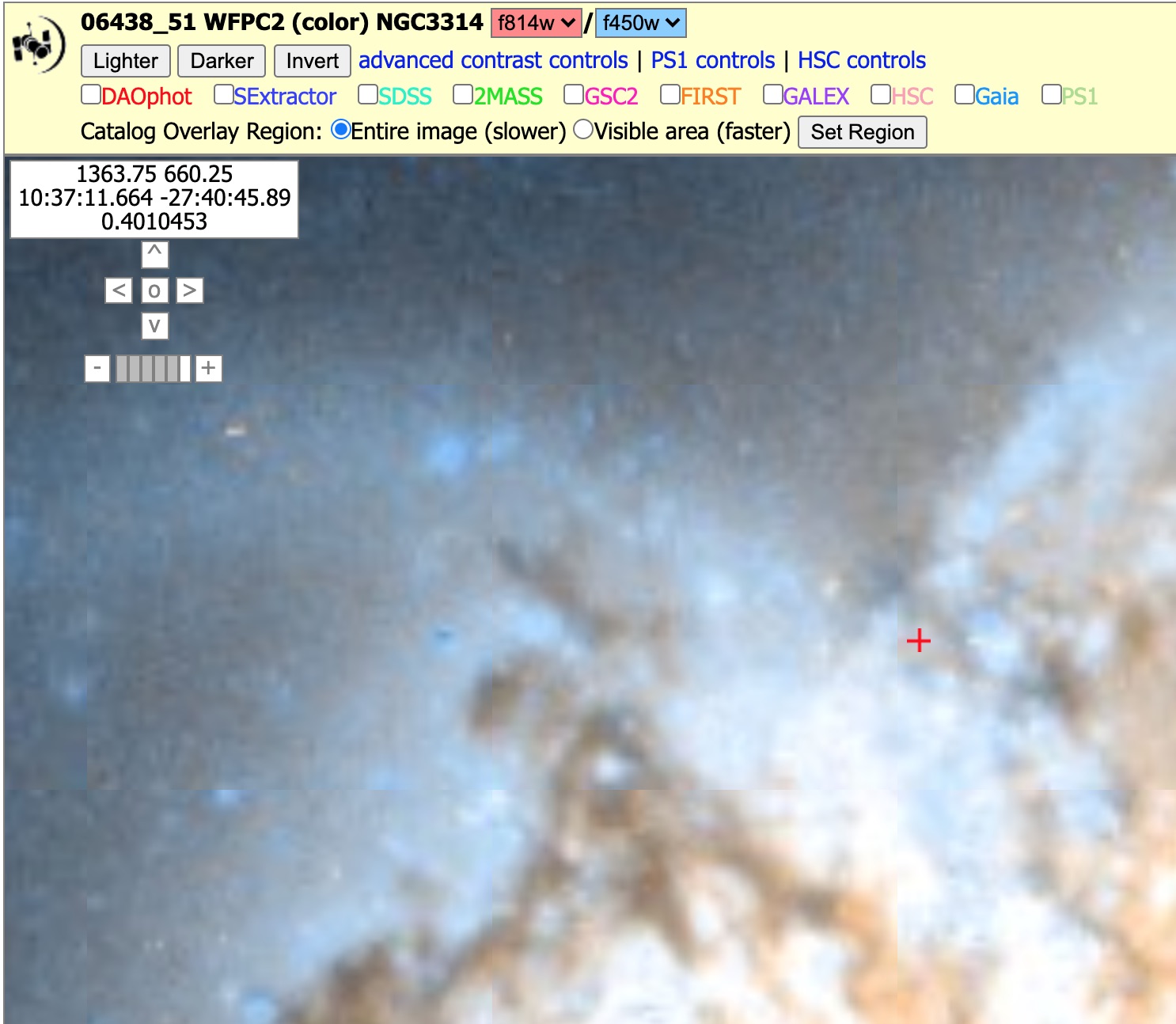 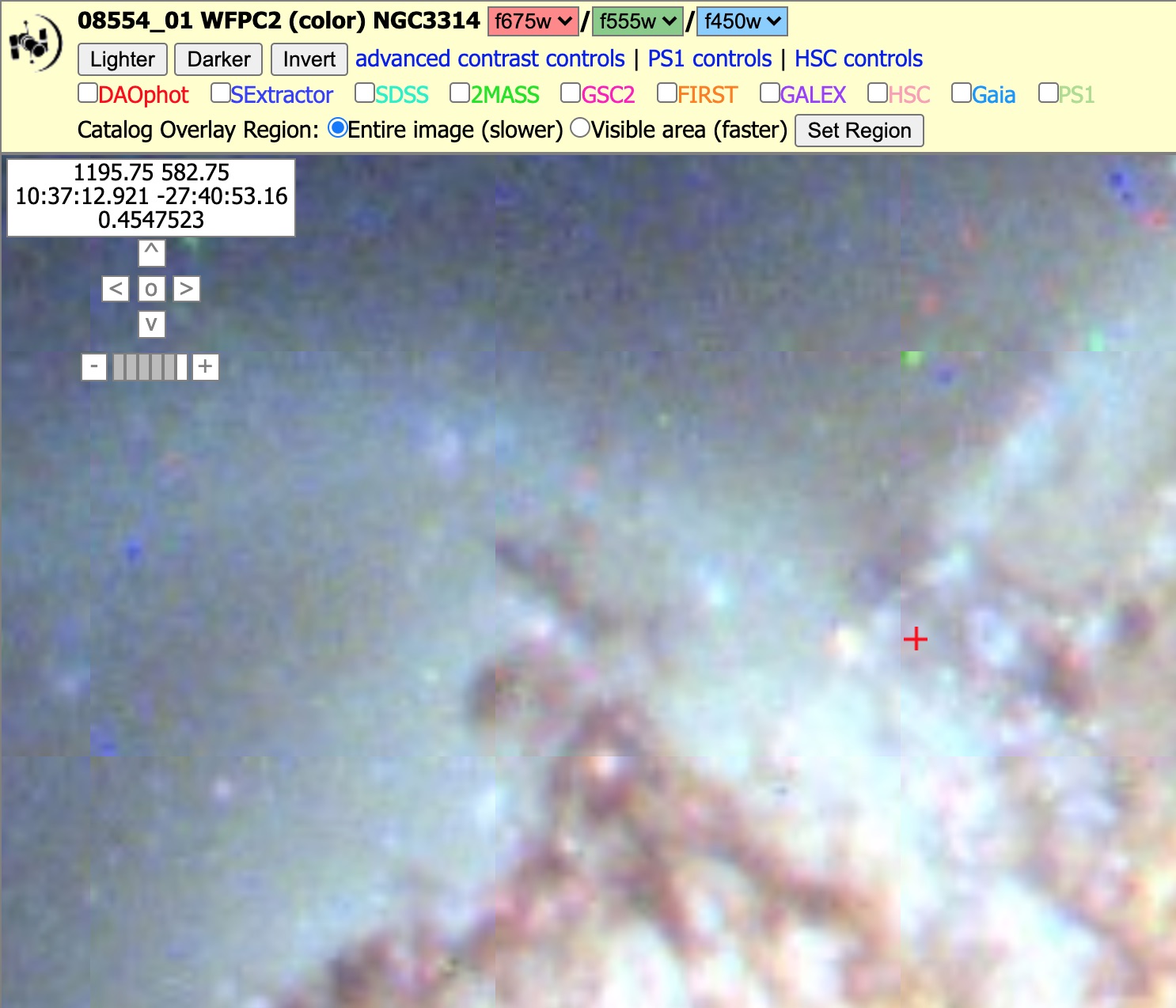 You can see that the newly-brightened object is basically white, not green. The individual, isolated red, green, or blue pixels are noise. In any image, you will have some pixels that are extra-bright, either from noise in the detector, or from a cosmic ray hit that was not removed entirely. Since they are random noise, they aren't in the same place in every image. So if you make a color composite image, then those randomly-bright pixels will show up as the color of whatever filter they appeared in, since they are bright only in that image and dark in the images taken in the other filters.

Not the answer you're looking for? Browse other questions tagged observational-astronomy supernova identify-this-object dust or ask your own question.

1
Why weren't the Hubble light-echo images of V838 Monocerotis supplemented by ground telescopes?
11
How was Earth's “quasi-satellite” 2016 HO3 “first spotted” and it's orbit determined?
4
What complementary observation campaigns have looked at Kepler's field of view?
5
Where might astrometric observations of the Roadster spacecraft be catalogued?
2
More recent data and simulations of “Milkomeda”, the collision of the Milky Way and Andromeda galaxies?
3
Which kinds of astronomical observations most need to avoid the Moon being up?
4
What does “unremarkable transverse peculiar velocity” mean exactly, and how is it calculated here?