Is there an upper limit on the mass of black hole mergers we can detect?

From the LIGO website, black hole mergers have been observed between black holes with a mass up to roughly 50 $M_\odot$. 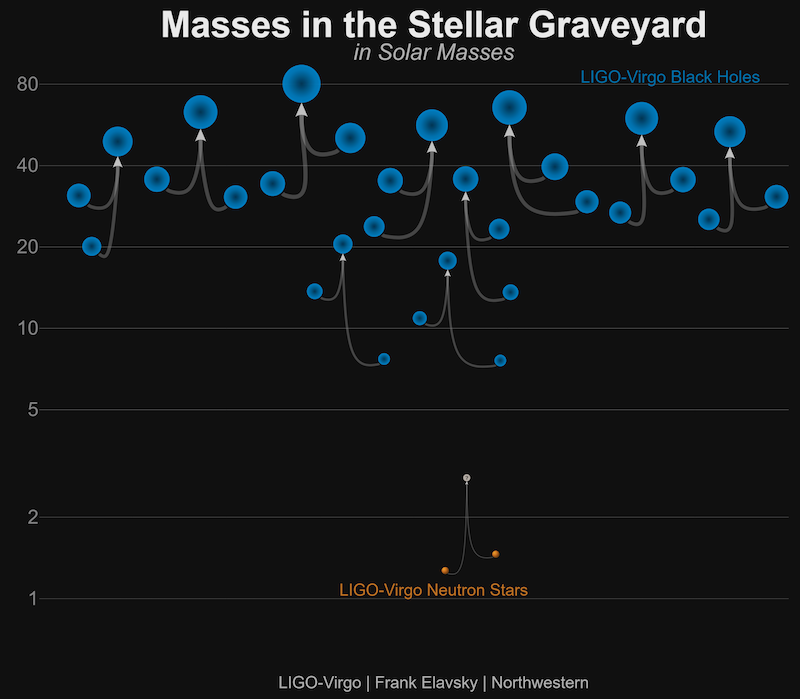 It is quite likely there is an astrophysical upper limit to the mass of a black hole that can be produced during the core collapse of a massive star, caused by the pair instability supernova phenomenon. There isn't an observational bias against detecting more massive black holes in the range of 100 to a few hundred $M_{\odot}$.

Now, LIGO is limited to observing frequencies above about 20 Hz. The sensitivity drops off rapidly below that because of seismic noise and other factors. If the mass of the merging black holes exceeds some critical value then the frequencies of the gravitational waves they produce never get into the sensitivity wndow of LIGO. Using the expression above, we can estimate that this happens only if the total mass exceeds $1000 M_{\odot}$. Observing the mergers of more massive black holes would require a detector that is sensitive to lower frequencies, probably beyond the surface of the Earth (e.g. LISA).

This calculation is only good to a factor of 2 or so, but we can check it. GW150914 had a total mass of around $65 M_{\odot}$ and merged at frequencies of about 120 Hz. Since $f_{\rm max}$ scales as $M^{-1}$ this suggests 360 solar mass mergers should be just about detectable, but clearly demonstrates that LIGO could detect black holes of 100-200 solar masses. What's more, at a given distance and frequency, the signals from such mergers would be more powerful than for less massive black holes -- something like $h \propto M^{5/3}$, which means the volume in which the mergers would be visible goes as $M^5$. Thus more massive black hole binaries would have to be extremely rare in order to have evaded detection.

The astrophyscal reason for an upper limit is the pehenomenon of pair instability supernovae (e.g. Farmer et al. 2019), which blows the star apart rather than leaving a black hole (or any other kind) of remnant. This likely happens for stars with initial masses of $130+\ M_{\odot}$, and means that leaving behind black holes with $M > 50M_{\odot}$ is very difficult, with even lower mass limits for stars with a metallicity more similar to the Sun, since they lose more mass in stellar winds during their lives.

For initial masses of $250+ M_{\odot}$ it is possible that the pair instability supernova mechanism ceases and direct collapse to a black hole becomes possible. In which case their might be a population of $300+ M_{\odot}$ mergers that are just below LIGO's sensitivity window. New Earth-based gravitational wave detectors like the Einstein Telescope and Cosmic Explorer aim to push their low frequency response down to a few Hz and might be capable of detecting mergers in the 300-1000$M_{\odot}$ range.

Many of those massive / super massive black holes are active galactic cores - that rarily will have said mergers. Many Astronomers assume those had their mergers in the early phases of their galaxies - since stars that produced them lived a rather short time.

This leaves way bigger chances for mergers of rather lighter black holes or neutron stars than for the massive or super massive ones.

Not the answer you're looking for? Browse other questions tagged black-hole gravitational-waves or ask your own question.

2
Can Gravitational astronomy look beyond the CMB?