This is Question 23 from USAAAO First Round 2015. The answer is D. Can someone show how to get the answer?

Calculate the planetary phase angle (counterclockwise from Earth, a = 1.0 AU) that a probe may correctly complete a Hohmann transfer orbit to Venus (a = 0.7 AU)

The last one looks suspiciously similar to the answer, but using that angular distance the phase angle should be 61°. Feel free to correct me anywhere that I’m wrong 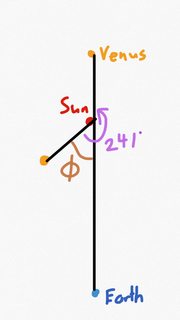 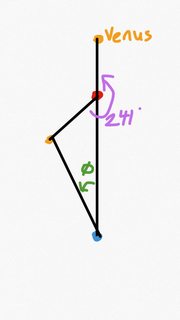 The Sun-Earth-Venus angle marked in green in your second figure is Venus's elongation, 43° east of the Sun as seen from Earth at departure time.

In another context, "phase angle" could refer to the Sun-Venus-Earth angle. At departure time, an Earth-based observer would see Venus in a 76° phase angle or 62% illuminated.

Not the answer you're looking for? Browse other questions tagged astrophysics orbital-mechanics artificial-satellite or ask your own question.

3
Satellite/Planetary Orbits
2
Mass limit of planetary ring
2
What is the range of the zenith angle between velocity and position vectors?
2
How to calculate phase angle of a satellite?
2
Is this a potential planetary setup for the Alpha Centauri System?