In recent years, the Juno mission revealed that Jupiter's core was much more diffuse than astronomers had expected.

One theory is that "within a few million years" of its formation, Jupiter experienced a head-on collision with a planetesimal of about $10M_{⊕}$, adding a lot more mass to its core from the silicate planetesimal, but also causing the core's contents to be broken up and mixed with the inner envelope.

The models used in this theory placed Jupiter at a distance of 5.2 AU from the Sun, which is approximately the same as its semi-major axis in the present day. The planetesimal in question would be at the higher end of the valid mass range for a Super-Earth.

Now, according to the Grand Tack theory, Jupiter originally formed at a distance of $\approx 3.5$ AU and migrated inwards toward the Sun, before gravitational interactions with Saturn caused the two planets to move outward and brought Jupiter to its present-day orbit.

Saturn itself would have formed at a distance of $\approx 4.5$ AU, increasing in mass from $30M_{⊕}$ to $60M_{⊕}$ during the first $10^5$ years of Jupiter's inward migration, before starting its own inward migration. This would have been much faster than Jupiter's, enabling Saturn to "catch up" and the gravitational interactions as described to then occur.

The original formations would all have occurred over a timescale of $\lessapprox 6Myr$, maybe closer to $\approx 3Myr$. (The original paper describing the Grand Tack refers only to "a few Myr"; the figures here are based on "Disc Frequencies and Lifetimes in Young Clusters", which it cites in support of this.) The inward and outward migrations would then have occurred in an 800,000 year time period (see Figure 1 of the Grand Tack paper) 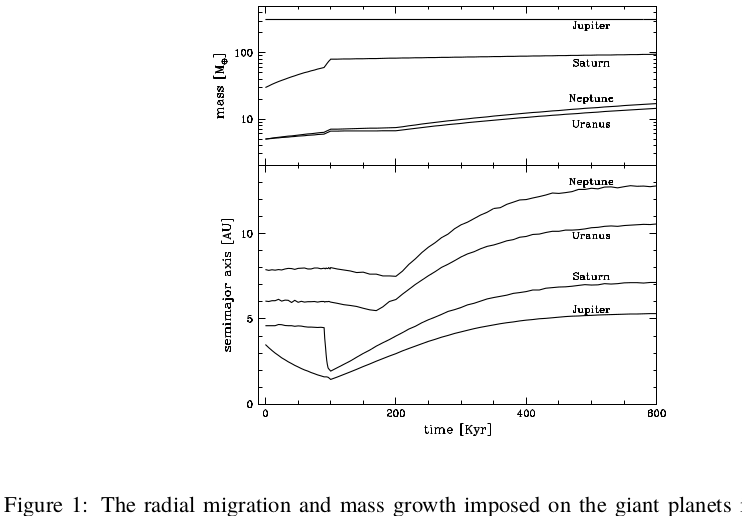 So far, the two models look quite compatible with each other, with the collision occuring after Jupiter settles into its 5.2 AU orbit. But there is one detail I'm not sure about. Here comes the question:

A paper cited in earlier versions of this question but which turned out to be incompatible with the Grand Tack theory:

I think this question might trigger more an open-ended discussion, than a definitive answer, but let me try my take on it.

Is it more likely that one of these collided with Jupiter itself at the head-on angle needed for the core-warping collision?

In order to collide, a co-orbital configuration is more favourable than a orbit-crossing encounter at high eccentricity (as seen in Liu et al., extended fig. 2), but their 'high angles' don't quantify high eccentricities properly. This is because in their simulations, all planetesimals are initialized at circular orbits, with initial distances of 5-10 mutual Hill-radii (their k parameter). Why I think they didn't properly compare apples with apples, is because usually an eccentric planet would have more kinetic energy than allowed in their simulations, reducing the collision cross-section.
This would lead to drastically reduced impact rates at high angles, compared to the data they show. Furthermore in the early scattering scenario that you propose, most planetesimals would be of too low mass to trigger the core mixing.

The mass required for the impactors is, I think, the major point why the two scenarios are not compatible. The initial conditions for the impact scenarios are those of 5 densely packed 10 $m_{\rm oplus}$ planets, of which one undergoes runaway gas accretion and becomes Jupiter. Those conditions are explained to arise due to oligarchic growth. For the 5 planets, this means that 50 $m_{\rm \oplus}$ are packed in a region of 5 AU size. This is already 1/3 of a median class 0 disc mass, and it necessitates a 100% high efficiency when translating pebbles to planetesimals to planets.
Seeing those numbers lets me strongly doubt the realism of the initial conditions.

Concerning the other part of your question,

The few million years" timescale is quite vague. Does anyone know any additional detail which might suggest the impact occurred prior to the Grand Tack's timeframe?

The few-million years are coming from a certain amount of cooling and compactification that is required for the impact to successfully mix Jupiter's envelope. Hence, the impact should not have occurred prior to the Grand Tack.

Taken both those things together, the cooling requirement and the mass/compactness of the initial conditions necessary, I don't think both scenarios are compatible.

Not the answer you're looking for? Browse other questions tagged solar-system jupiter planetary-formation orbital-migration core or ask your own question.

7
How does the Grand Tack Hypothesis explain how Jupiter formed inside the frost line?

1
Jupiter's magnetosphere interacts with the one from Saturn?
7
How does the Grand Tack Hypothesis explain how Jupiter formed inside the frost line?
2
What starting circumstances have to be for "grand tack" hypothesis to work, and why they are lacking in other planet systems(as far as we know)?
6
Does the Giant Impact Hypothesis explain how the Moon circularized its orbit?
5
Are there any simulations of the Grand tack?
1
What's the exact story of jupiter and our earth, not becoming a super-earth?
6
When will Callisto be in orbital resonance with the rest of Jupiter's big moons?
8
Feasibility of Grand Tack Hypothesis
23
Intuitive explanation of the source of energy that cause Jupiter and Saturn to migrate outward in the Grand Tack Hypothesis?