In practice, can very high magnetic fields significantly alter the dynamics of an astronomical-scale bodies?

The direct effect of magnetic fields on the dynamics (as in the movements, trajectories etc of the bodies themselves, rather than lower-level phenomena like stellar winds and atmospheric degradation) of astronomical bodies in places like the solar system are so weak that they can be ignored without real consequence. But it seems intuitive that in the vicinity of bodies with extremely high magnetic fields - such as magnetars - that such fields would have a significant or even dominant effect dynamically, requiring electromagnetism to be considered alongside gravity in order to supply an accurate dynamical description of the system.

Considering the fact that the magnetic fields of such bodies range upward of 100 billion Telsa, the fact that the coupling constant for electromagnetism is some 40 orders of magnitude greater than that of gravity, and the fact that magnetic force drops off with the square of distance just as gravity does, it seems odd that such magnetic fields wouldn't have such an effect (at least on other bodies with magnetic fields, as well as bodies with a high content of ferromagnetic materials), but I've never heard any mention of such a thing. So what I'm wondering is if such behavior is expected in the vicinity of highly magnetized astronomical bodies, and if not, what am I overlooking here?

Where such an effect becomes important is during the accretion of matter from a regular (more-or-less) main sequence donor star onto a magnetized neutron star.
Here, the magnetic field at the NS can reach about 10$^{12}$ G and the rate of accretion about 10$^{13}$kg/s. On its way down the gravitation well towards the NS the material, by now mostly a plasma, will reach a point where the Lorentz-force will force it to spiral around and follow the magnetic field lines. So from that point onward its dynamics will be determined by the structure of the magnetic field, and the material will ultimately fall onto the magnetic poles, creating pulsars. This forcing onto the magnetic field lines happens roughly when the magnetic pressure exceeds the ram pressure of the material. So, $$ P_{\mathrm{ram}}=P_{\mathrm{B}} \\ \rho(r) \cdot(\dot{\vec{r}})^{2} = \frac{B(r)^{2}}{2 \mu_{0}} $$ Here B(r) is a dipole field around the NS which drops off as r$^{-3}$ and so P$_\mathrm{B}$ drops off rapidly as r$^{-6}$, as Rob Jeffries already mention in his comment. The radius around at which the magnetic field becomes dominant is called the Alfven radius and is in the order of a few 1000 km.

This then looks something like this (Filippus et al., 2008): 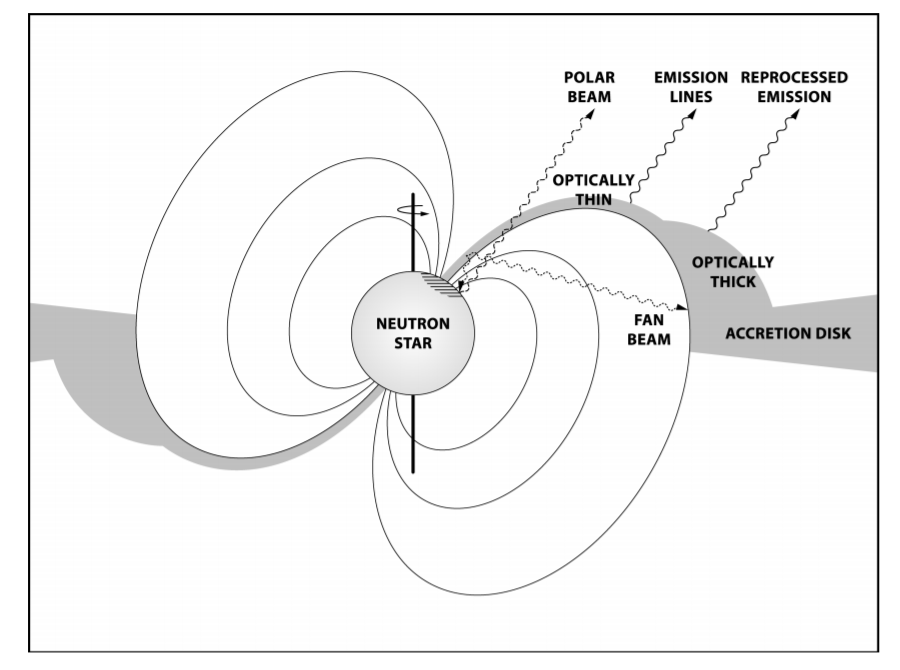 I am not sure, however, if that counts as astronomical-scale, but this is the most dramatic effect of magnetic fields I could think of.

This doesn't answer what happens around magnetars, but it does answer if magnetic fields can have a significant dynamical effect on any large bodies, on par with gravitation.

Magnetic fields in the interstellar medium play an important role in the dynamics of clouds of gas. These clouds are much larger than the solar system. So even comparatively low magnetic fields (6 to 40 $\mu$G on average in our Galaxy) can have a significant effect, and indeed cannot be ignored when studying the structure of the Galaxy.

Not the answer you're looking for? Browse other questions tagged gravity neutron-star magnetic-field magnetar or ask your own question.