SO, I decided I would take some pictures of the comet C/2019 Y4 last night. Afterwards, I thought I would try and do a rough estimation of distance based on my observations. I don't have any fancy measuring tools, so a few approximations were made, but my result was way off. I've clearly done something wrong and was hoping someone could point out where I have gone wrong and correct me.

So, I basically layered my first picture over the second in photoshop and marked the start and end position over the course of 1 hour. 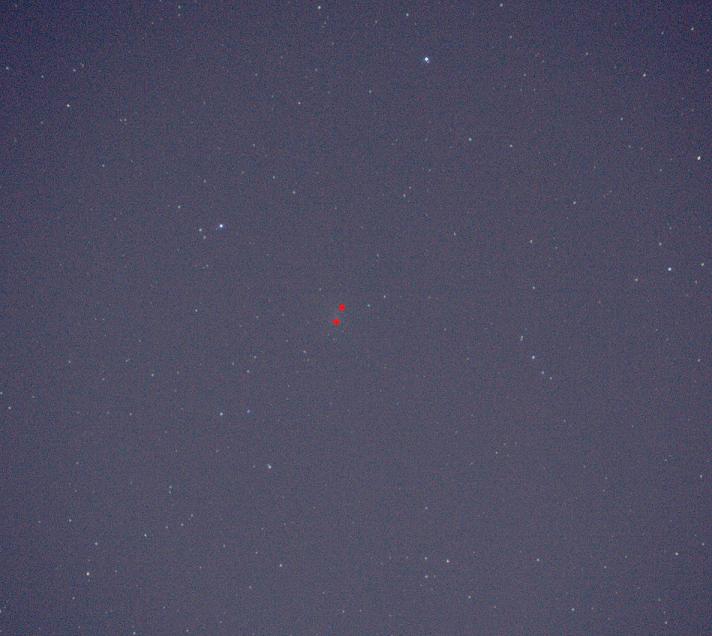 I apologise for the poor photo, the exposures were short and I haven't done any processing as I was only interested in the position.

I used the measurement tool in the app to measure the distance in arc-minutes, which gave me 1'55.1"

I then decided to work out the approximate distance between my start and end points by using my latitude to work out the speed the earth was rotating (cos(latitude) x 1670) which I found HERE.

So where did I go wrong? Was it because of poor approximations? I know that the linear distance for the adjacent side isn't quite accurate because of earth curve, and I know the comet was also moving, and I know my measurement of the start and end position wasn't too accurate, but I was hoping to at least get within 10%, so I think I must have gone wrong somewhere in my method, rather than poor approximations.

I do hope I have put enough effort in for this to be considered a good question. I have tried re-measuring and double checking, but if there is any other info people need, then by all means, ask and I'll do what I can

Because of the comment by barrycarter, I realised I had forgotten the movement of earth itself. As this is approximately 107207km/h, I included this in my calculations and ended up overshooting and getting 238,577,507km.

So, I made tiny adjustments to my parallax angle, and if I change this slightly, then I get very different answers.

Based on that, is it possible my crude measurement of the parallax angle is to blame?

It appears that you are doing a simple parallax calculation, using a baseline obtained from the Earth's rotation over an hour. You appear to be neglecting the most significant change, the motion of the comet.

If you plot the position of C/2019 Y4 in SkySafari, you will see that around this date the comet's location against the star background shifts about 37 arc minutes per day, or a bit over 1.5 arc minutes per hour. The location is based on the orbital elements of the comet (MPEC 2020-C76), but also includes the effect of the Earth moving in its orbit, as mentioned in the comments.

The issue that you have is that

Because the comet is moving at a similar speed to the Earth, you would need to determine the orbit of the comet, you can't find only its distance. Orbital determination requires a minimum of three observations, and for most mortals, you need a software package to do the calculations for you (unless you are Carl Fredrick Gauss, of course)

Not the answer you're looking for? Browse other questions tagged distances comets or ask your own question.

3
Conundrum involving distance to object, universal expansion, age of universe, etc
0
Moving-Cluster method for determination of the distance of Hyades. A starter problem
5
Did Gaia actually generate complete light curves for 212 Cepheids in other galaxies?
5
A question about calculating the radius of a comet
2
What makes scientists already so certain that Comet C/2019 Q4 (Borisov) is a comet and not an asteroid?
8
Size and mass of comet ATLAS (C/2019 Y4)
2
How precisely we know the Gaia spacecraft baseline? [Question related to Planet 9 and the cosmic distance ladder]
3
Calculating the present comoving distance or light travel distance of distant objects when only one value is given?