Why dimmer high-redshift supernovae means the expansion is accelerating, if the dilated region pertains the distant past?

I must be seeing this wrong, because it seems to me the data indicates faster expansion in the past, contrary to Adam Reiss' study that led to the birth of the notion of 'dark energy'.

In Reiss' seminal study, [https://arxiv.org/abs/astro-ph/9805201], which was followed by others [https://www.researchgate.net/publication/231060958_Measurements_of_O_and_L_from_42_High-Redshift_Supernovae] that confirmed the measurements (and earned him the 2011 Nobel), high redshift (very distant) Ia supernovae are 15-25% dimmer (i.e more distant) than the current Hubble constant (circa 74 km/s/megaparsec) would predict from their redshift. This lesser luminosity (or greater distance) in the distant region was concluded to signify the universe's expansion is accelerating, rather than slowing down as would be expected from the effect of gravity, as a ball thrown upwards by hand will rise more slowly each second until it stops rising and falls back down. Thus, that some effect must be accelerating the expansion of the universe, referred to by the placeholder name 'dark energy'.

This measurement generates a graph where low redshift (closer) supernovae seem to follow a straight line along the Hubble constant, and then in the more distant region the plot goes up from this straight line, as they are further than their redshift would predict, forming what I call for the purposes of this question a 'shallow V' shape. 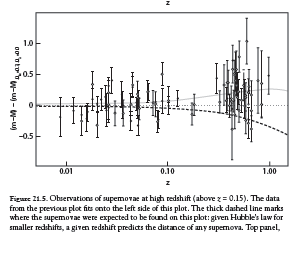 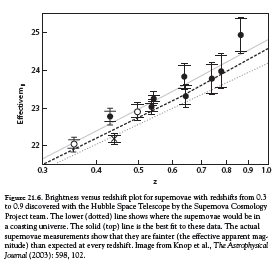 The standard answer is something along the line "The argument is pretty straightforward, and can easily be understood with a real-world example. Consider two cars leaving your house. They start out going at the same speed. But over time, one car speeds up, while the other slows down. After some time, which care will be farther away from you? The one that’s speeding up, of course. That’s obvious. And something that’s farther away looks dimmer (at least if they have the same intrinsic brightness)."

This explanation - that the universe currently expands at a faster rate than in the past - does not seem to explain the “shallow V” curve we see. It would explain a “shallow A”, with a higher Hubble constant in the present and a lower one in the past. We see a curve (or a line with a bend on it) that - it seems to me - cannot be interpreted other than the greater increment being at the point of departure, most distant from us, not nearer to where we are, ie. with a higher Hubble constant in the distant past, say around 80-90 km/s/Mp.

How can we be seeing this curve we see with the accepted interpretation? Should not the curve be bending the other way? Obviously I must be seeing this wrong, but where is my error?

They are further away than they "should" be according to a decelerating universe model (one without dark energy). That is because the expansion has accelerated.

The light travel time distance to a distant supernovae is measured by the time it takes light to travel from the supernova (when it went off) to us, now. A relatively nearby supernova is barely affected by any acceleration/deceleration of the expansion. It's distance is given approximately by a straightforwad application of a "coasting universe", one that is expanding at a constant rate - the flat line on your top plot.

If the light has to travel further across the universe then the effects of the cosmological parameters start to become apparent. In a decelerating universe the rate of expansion slows, so a simple application of a "coasting universe" would result in an underestimated distance (the dashed line curving down in your top plot).

I attach a better plot, from the Riess et al. (1999) paper that you reference, with lots of lines representing different combinations of $\Omega_M$ (matter density, a decelerating influence) and $\Omega_\Lambda$ (dark energy, an accelerating influence). Thus a coasting universe has neither and that is the flat line in the middle, representing a universe that has always been expanding at a rate that can be measured locally. 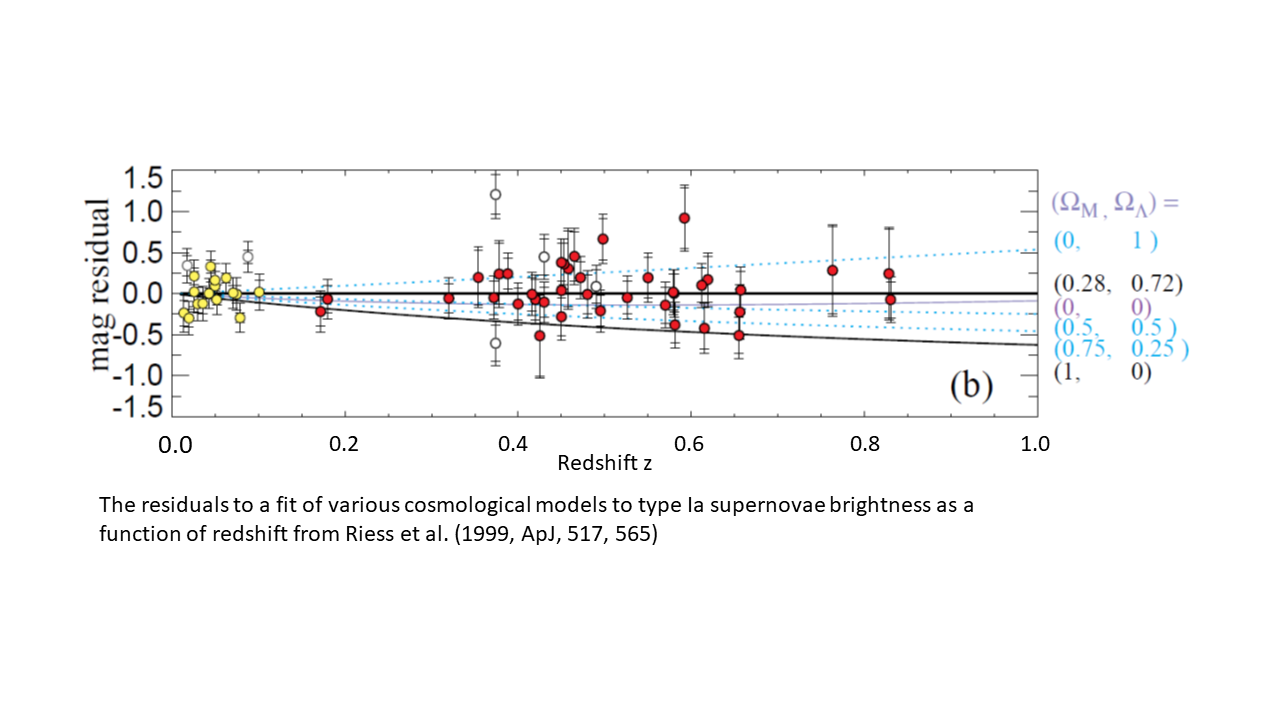 In a decelerating universe (e.g. a flat universe with $\Omega_M=1$, $\Omega_{\Lambda}=0$), the expansion rate was much faster in the past. If however we lived in an "empty" coasting universe, the rate of expansion would have been constant and we would now see the supernovae as further away. If the universe is accelerating (e.g. $\Omega_{\Lambda}=1$, $\Omega_M=0$), then this effect becomes more extreme; the supernovae would be much further away and even fainter.

We appear to live in a universe somewhere between coasting and extreme acceleration (well we know there is some decelerating matter in the universe right!). This is the $\Omega_M=0.28$, $\Omega_\Lambda=0.72$ curve. This universe has been accelerating for the last few billion years, which covers the distances to the supernovae on this plot. The distant ones suffered a lower rate of expansion than those closer to us and as a result are further away than predicted by a coasting model.

However, in such a universe, if you go even further back in time to even more distant supernovae, then the expansion was being decelerated, because whilst the dark energy density stays the same, the matter density was much higher. That is why you can just see the $\Omega_M=0.28$, $\Omega_\Lambda=0.72$ turning down again at the highest redshifts on the plot.

And here indeed is a more recent plot (from Riess et al. 2007), which appears to show this turn-down at higher redshifts quite clearly and delineates the turnover from a decelerating to accelerating universe at $z \sim 0.8$ (e.g. Daly et al. 2008). 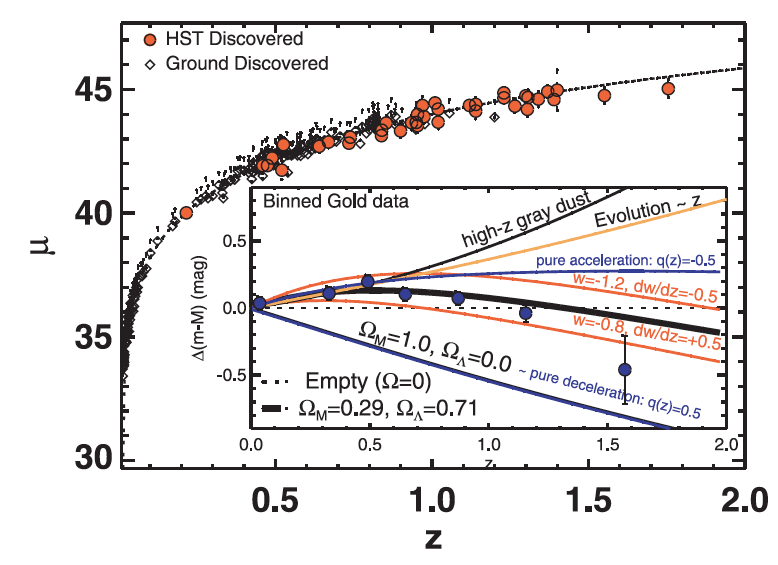 Not the answer you're looking for? Browse other questions tagged cosmology dark-energy .

8
Does the Hubble constant depend on redshift?
5
Evolution of the Hubble parameter

9
Is the Universe really expanding at an increasing rate?
0
Seeing a galaxy (quasar) greater than 46.6 billion light years away
4
Why can we trust Hubble Time if the rate of expansion is not constant?
7
How is the Universe's Expansion Accelerating if the Hubble Constant is Decreasing?
1
If objects don't move when the universe expands, how can the expansion result in redshift?
0
Cosmological redshift - How do we know it's not caused by the observer's time dilation?
2
Why do we expect Type Ia Supernovae to be brighter in a decelerating Universe than what has been observed?
1
How is it possible that a universe with mass does not have curvature?
2
Observability of proper distance
4
How can it be justified that every discovery at z > 1 is an indication of "slowing down" or past deceleration?