Is the difference in time between the sideral and synodyc month - constant?

My question is: Is the difference in time between the sideral and synodyc month (around 30 degrees) - constant, or it may be various too?

The information above was taken from here:

The time difference (synodic month) - (sidereal month) will not be constant. The reason for the variation is due to the eccentricity of the Moon's orbit: the Moon moves faster at perigee (closest to the Earth) than when at apogee (farthest from the Earth). If the Moon is near perigee around the time of New Moon, it takes less time for the Moon to "catch up" with the Sun, so the synodic month is shorter.

Also, the Moon's perigee and apogee distance changes from month to month due to the influence of the Sun. This also affects the speed of the Moon in its orbit. (The apparent speed of the Sun also changes because of the Earth's elliptical orbit around the Sun, but the variation is smaller.)

It may be helpful to take a "geocentric" view; that is, look at the motion of the Sun and Moon on the sky. In the following figure, a rare annular eclipse occurs with the Sun and Moon occulting the star Regulus ($\alpha$ Leonis). The days listed are the average sidereal and synodic periods. After 27.32 days (one sidereal month), the Moon is again aligned with Regulus. The Sun is farther east in the sky, so it takes a few more days for the Moon to catch up with the Sun and complete a synodic month (39.53 days). 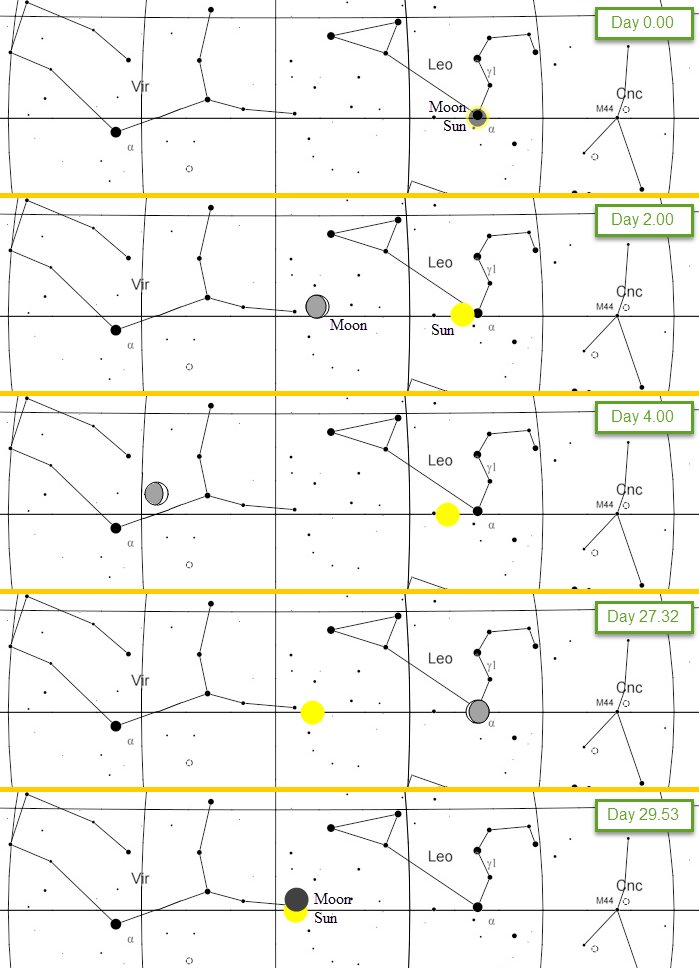 Note: The distances travelled are approximate in this figure. The apparent size of the Sun and Moon are greatly exaggerated!

The two months are related by the speed of each object:

It should be apparent from this equation that if the speed of the Moon varies, then the duration of the synodic month T will change as well.

The blue dots represent synodic months measured from new moon to new moon or full moon to full moon. The red dots represent months beginning and ending at first quarter or last quarter. Points on the gray curves are reckoned for other phases.

If the difference between synodic and sidereal month lengths were constant, all the points would lie on the dashed diagonal line.

Not the answer you're looking for? Browse other questions tagged sidereal-period synodic-period or ask your own question.